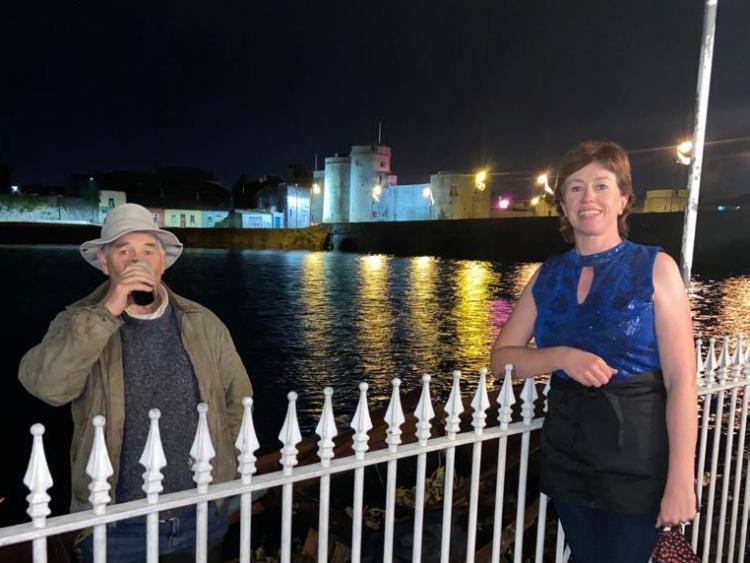 WHEN TONY Duhan moored his boat at JJ Bowles' on Saturday evening it was on the Guinness side as opposed to the portside.

After the Thomondgate native got thirsty at the end of a row on the Shannon he pulled into JJ Bowles’ where Aengus and Rioghna D’Arcy were happy to oblige him with a pint of plain.

Aengus joked it brings a new meaning to the term "wet pub".

"The regulations have taken a bit from the atmosphere but things like this brighten it up and keep our spirits up. It has happened a few times before," said Aengus, who is the proud owner of the unique riverside beer garden.

He tweeted the pic and it got a great reaction on social media with over 1,000 'likes'.

The lengths people will go to: Limerick’s best pint - now available for takeaway (by boat)... pic.twitter.com/d1Jslun0wl

Tony, who has been rowing on the river all his life, said there was a lovely high tide on Saturday evening.

"It was a beautiful evening and the city was looking exquisite. I rowed down as far as the Clayton, taking everything in - the big wheel in Arthur's quay, all the lights, all the businesses and back up the other side. It is about 5k.

"I call it the three bridges but I do it by water. There is something beautiful about going rowing in the dark," said Tony.

By the time he got to Thomond bridge he deservedly felt like a pint.

"JJ Bowles was all lit-up beautifully in the back. There was a chap standing at the railing that I recognised. I just pulled in and automatically said, 'Send in there and get me a pint of Guinness'.

"Next thing the owner came out with a pint and we were chatting. The other customers were all looking, taking photographs and having the craic. I drank my pint and went off with about my business back to where I came from - Barrack Lane Boat Club in Thomondgate," said Tony, who lives in Clareview.

He would have sunk a second pint too.

"It was a great pint, absolutely beautiful pint. Only for I was in charge of a boat I might have had a second or third one! They won an award for the best Guinness in Limerick.

"It was a very nice creamy pint. The fact that it looks like we are facing into lockdown I said I better grab a pint because I don't know when I am going to have the next one," said Tony.

And Aengus doesn't know if he will be able to serve them after tomorrow either.

"Up until today I was hopeful we might get through it but now I think it is unlikely. We’ll wait and see," said Aengus.