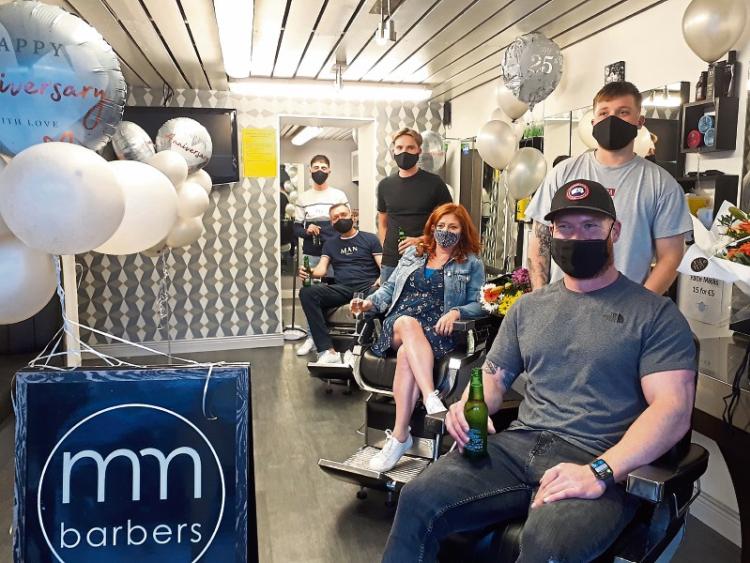 A POPULAR Limerick barber's shop celebrated a quarter-century in business over the weekend.

It was a day of memories at Modern Man barbers in Sarsfield Street as customers who its founder Patricia Morris has served since she opened in October 1995 came in to share their recollections.

Patricia founded the company after returning from England after working for a barber in Milton Keynes, south-east England.

She decided to name her local hairdressing salon after it, and Modern Man Limerick was born.

“It's been great, 100%,” she said, “I've had customers coming in here who have been with me from day one, 25 years later. We've welcomed them back here. We've had a few glasses of champagne. We've had flowers and chocolates. A lot of people have been passing to wish us congratulations. Just regular customers really. We appreciate it.”

Although the big anniversary is the 25 years Patricia has been in business, two other birthdays were celebrated.

And it's exactly five years ago this week since Shane Burke joined Patricia at the helm.

It's something of a full circle for Shane, because he first came into Modern Man for a snip at the age of just three years old in 1995 shortly after the business first opened.

Shane said: “Our customers have stuck with us through thick and thin. People have been telling us their stories of when they first came in here, they still remember it. I feel lucky than to even be left into the business! I'm very appreciative of the opportunity I was given from the start.”

Something really important to founder Patricia, who lives in Clonlara, is that no matter who comes in the door, they are made feel welcome.

“Everyone gets the same treatment, the same service. You're made feel welcome whether you're wealthy, poor, old or young,” she said.

Six staff work for Modern Man's two outlets in the city, with Patricia taking staff on young and training them in hairdressing.

Over the last quarter century, some 25 barbers have qualified while working for Modern Man.

It's important for her to have good staff.

“I do believe my staff are as important as my customers over the years. I wouldn't be here without them,” she said.

The Covid-19 pandemic has presented unprecedented problems for Shane and Patricia.

“We've had to look at how we were working from the start. Barbershops were always known as a place to gather and get a bit of banter. Unfortunately, that's had to stop. We've just had to abide by the guidelines and work with them as much as possible to keep the show on the road,” she said.

And what about the goals for the next year? While Patricia admits she is eyeing retirement, Shane says he hopes Modern Man can open a third store in Limerick.

The pair both expressed huge thanks to the Limerick public for supporting the barbers shop over the years.