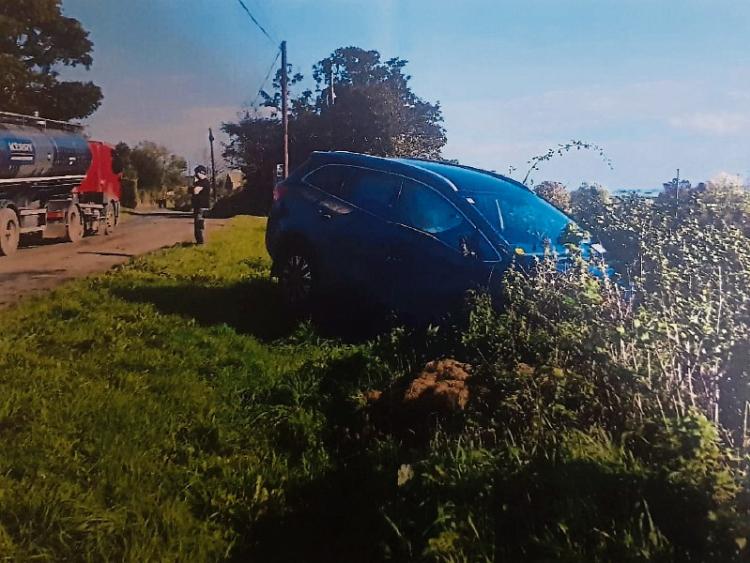 The scene of collision which occurred in 2018

A MILK lorry driver has been found guilty – after a long wait due to Covid-19 – of careless driving.

Ivor de Roiste, aged 37, of Ballynahown, Croom had pleaded not guilty to the offence which occurred at Ballinoran, Bruree on October 18, 2018.

The contested case was heard on February 28. Judge Marian O’Leary adjourned it for a month to consider her verdict. However, due to county courts being postponed it was delayed until September 25.

Back in February the injured party told the court the crash occurred around 1.10pm and it was a dry day.

She continued: “I could do nothing to stop the lorry hitting me. Everything went dark. There was a ferocious bang. My car ended up suspended on a low wall in the ditch.”

The court heard that a passer by and Mr de Roiste helped her out of the car.

“I have problems with my neck, shoulders and arms. I am getting treatment. I am waiting for a referral,” she replied.

Con Barry, solicitor for Mr de Roiste, said his client would say he was not speeding.

“Why couldn’t you stop?” asked Mr Barry. “I didn’t have enough time,” she replied.

“Any reason you couldn’t stop in time?” asked Mr Barry. “I tried to stop,” said the injured party.

The next witness in court was a local man who came upon the scene.

Mr Barry asked if there was a lot of mud on the road from agricultural works?

“There was some mud,” said the independent witness, who added that he saw Mr de Roiste reverse the milk lorry after the crash.

The next person in the witness box was the investigating garda, Pat McEnery.

The Bruree-based garda said the injured party told him she was “virtually stopped” before impact.

“She said she saw the cab over the hedge, the rear of the truck veered across to her side of the road and impacted with her car,” said Garda McEnery.

Mr Barry put it to the garda that he had two engineers who would say that in their opinion mud on the road was a factor in the back of the lorry not having grip.

“I’m not qualified to answer that,” said Garda McEnery. Later in the lengthy case, the two engineers gave their evidence about the condition of the road.

The defendant – Mr de Roiste took the stand – and said he was collecting milk from farmers.

“That was my last farm. I was going to the factory with 20,000 litres – about 60% full. I was coming onto the bend. I wasn’t speeding. I could see the vehicle coming towards me. A collision occurred between the rear tyre on the trailer and the car. I got out and went to the car to help the lady out,” said Mr de Roiste, who added that the cab and trailer had gone 90% around the bend.

Mr Barry asked him if he could have done anything? “No, I couldn’t,” he said.

“It was on top of me,” said Mr de Roiste, who denied reversing the vehicle after the crash.

Insp Wallace said: “I have to put it to you that you were finishing up your day’s work, were anxious to get back and drop off your load. You were on an unfamiliar road, driving too fast, you couldn’t get the trailer back in and you caused the impact.”

In summing up, Mr Barry said the injured party tried to stop but couldn’t stop and pointed to the two expert witness who gave evidence on the condition of the road.

“Mr de Roiste is an experienced driver. It was the condition of the road that caused the accident. Taking everything into consideration the State has not reached the threshold and I respectfully ask for the case to be dismissed,” said Mr Barry.

“He failed to see a vehicle coming against him and was not able to stop in time. There is a case to answer,” said Insp Wallace.

After a seven month wait for a verdict, Judge O’Leary said she had re-read her notes from the case. She went through the evidence of the various witnesses including the drivers of both vehicles and the independent witness.

In convicting Mr de Roiste, Judge O’Leary said she accepted the evidence of the injured party, the independent witness and Garda McEnery.

“I therefore find the defendant guilty of careless driving,” said the judge.

Mr Barry said his client is self-employed with five full-time employees and one part-time.

“His salary is €500 per week. He has no previous convictions and is a hard-working man who has been driving since he was 18,” said Mr Barry, who urged the court to exercise its discretion and not disqualify Mr de Roiste from driving.

Judge O'Leary imposed a €750 fine. No ban was imposed.