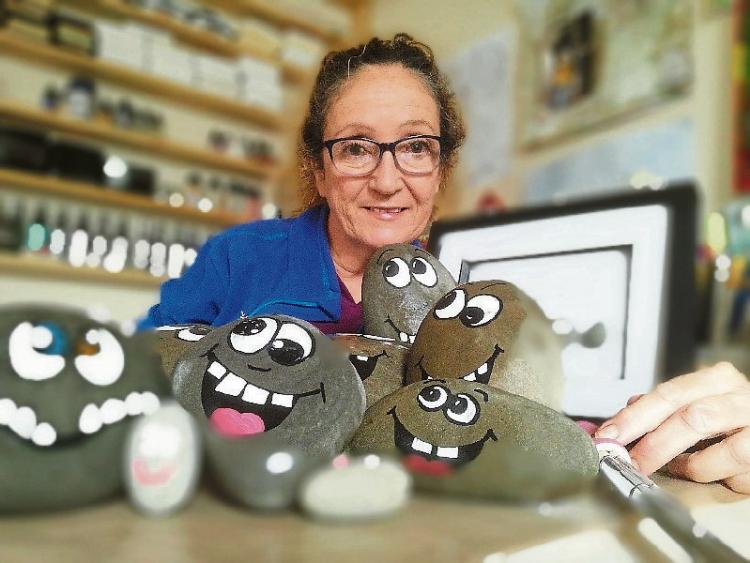 Sylvie Sims with some of her painted rocks

LIMERICK lady Sylvie Sims is putting a smile on the faces of not just people but rocks too!

While the beginning of the Covid-19 pandemic was very difficult for most, Sylvie had the added hardship of being diagnosed with cancer. But instead of dwelling on the negative, the Caherdavin resident used her free time to do something positive. She started YouTube art demonstrations for children.

“I was feeling very unwell at this time so as a way of support, from a therapeutic point of view, I decided to do some YouTube demonstrations for the children so they would have something lighthearted to do,” explained Sylvie who has worked with children in various therapeutic settings over the past 15 years.

As Sylvie and her students were restricted in terms of places to go due to lockdown they used their surroundings to their advantage.

“I did a demonstration about how to do simplified faces on rocks and give them to somebody in their neighbourhood,” explained Sylvie who works therapeutically with children in Ennis.

“I just thought it was a nice way for children to have something to focus on, which was positive and was giving back to people,” she said.

After Sylvie’s diagnosis she began chemotherapy and was in and out of hospital. Unfortunately, she reacted badly to the treatment and was hospitalised. Again, instead of focusing on the negative she decided to paint some kind messages on some stones for the nurses as a way to thank them for their hard work.

Her creativity during her time in hospital didn’t end there as she also painted some stones for other patients who needed a boost.

“Some of the patients were scared and emotional so I asked my daughter to bring in some stones to the hospital. So I sat there in the bed and made up some smiley faces and gave them to the patients. Anyone who received a stone from me was always so grateful and thrilled to bits to get it because I made it especially for them,” she said.

While on a staycation in Kilkee, Sylvie and her sister Carrie collected a few dozen stones from the beach.

“We spent one of the nights painting messages and different types of faces on the stones. We went back early the next morning and strategically placed the stones for people to find if they are around the area. We’re hoping that people don’t pinch them and take them away and instead leave them back for other people to find,” she concluded.