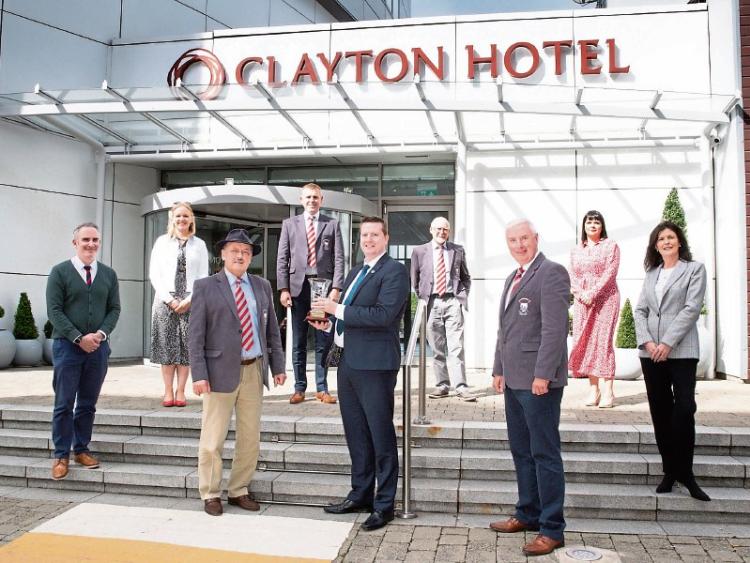 FROM modest beginnings in 1983, Castleconnell Boat Club is now the largest rowing club in the country in terms of registered members.

And in recognition of the success of the facility, those who have been the driving force behind its growth have been named the Limerick Persons of the Month.

The award was accepted at the Clayton Hotel by club founder Gerry O’Neill, along with other committee members and volunteers.

“From small beginnings the thing has really taken off. We have had great support from the locality and neighbours,” Gerry explained.

The idea for the boat club came about when Gerry used to row with Limerick Boat Club.

“I was living in Castleconnell - a non-tidal river. When we started to row out there I said to my wife, Mary, ‘I’ll be on the river every Saturday and Sunday at 10am’. Whereas here,” he says, looking out on the Shannon from the window of the Clayton, “it could be in the afternoon, early morning or late evening because it’s tidal.”

A committee of local men came together - some of whom knew nothing about rowing. Gerry’s brother, Jim, was the only one with previous knowledge of the sport and he later became the first president of the club.

The rest got stuck in. Castleconnell Boat Club was founded in 1983 and had their first meeting in the Shannon Inn.

“All club meetings were held there until recently when it sadly closed,” explained Jim Pidgeon, club secretary.

“At that time we didn't have a boathouse for our equipment, so we housed our boats behind Betty Bonner’s Bar in O'Brien’s Bridge for a few years.

“We then rented land from Jimmy Ryan Cooper at Mona Lodge and built a temporary boat house with timber logs. After some time we moved to the yard behind Johnie McDermott’s bar in Castleconnell. A lot of moving and we seemed to be going further from the river.

“Eventually, we acquired a site at the World’s End from Mr Joe Dundon and we put down roots and the boat club is here since. At that time we had an excellent and hard working committee who worked tirelessly to get the club up and running.”

Today, the club is the envy of many as members can row on nearly 4km of uninterrupted waters of the River Shannon between the villages of Castleconnell and O’Brien’s Bridge. This section of the river is non-tidal and can be accessed all year round. They now have 180 members - 120 of which are juniors. Members are aged from 11 to 80 years.

“Competitive rowers would be out twice a day, six days a week. You can row just over three kilometres, out to O’Brien’s Bridge and back again. There are often regattas. There used to be massive regattas,” said Gerry.

According to Michelle Kiely it’s not just the physical benefits of rowing that has people hooked.

“You make really good friends out of it and it helps the young people’s study as well because they learn discipline.”

The club has won numerous awards and has been represented at international level with members rowing in the European Regatta and World Championships.

The gender breakdown of members is almost 50:50. The club runs camps every summer and Easter.

“We have three boathouses built in the last three years and we have planning permission for another one,” said Gerry.

The club has in the region of 100 boats as well as a fully functioning gym with weights equipment and 31 ergometers (rowing machines).

“We’ve a very good committee of 19. The committee is the driving force really. We meet once a month,” continued Jim Pidgeon who remembers when they started with only two or three boats.

“There is one head coach and everyone else volunteers. We have very dedicated coaches.”

Unfortunately, like most clubs and activities, Castleconnell Boat Club has suffered as a result of Covid-19.

“Pre-Covid times we would have had a big event in October - Castleconnell Head of the River. We could have had around 1,000 people taking part in it from all over Ireland,” explained Deirdre Kiely.

“We would have a big sprint regatta in May and we would have had a number of smaller events.

“Right now, at least they can get out on the water. But how any of the events will work for the coming season, we're not sure!”

Sadly, the club has also been damaged by flooding in the past, with February being the last time the clubhouse succumbed to the elements.

“The county council have been very good,” Gerry pointed out. “We have built a wall around the club but we need to improve that so we are putting a floor inside that wall which will stop it completely.

“The council have been very helpful to us. All of our fundraising events have been cancelled because of Covid -19 and what helped us was the GoFundMe.”