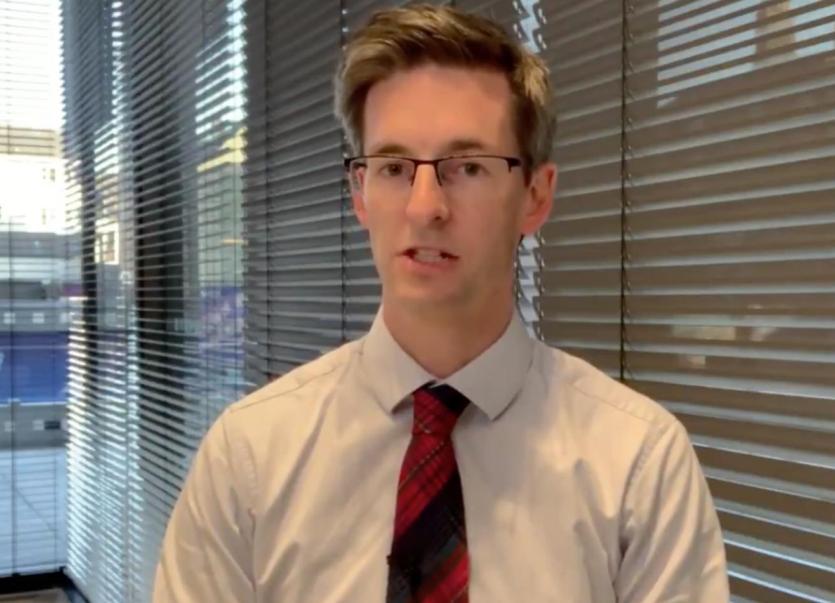 THE ACTING chief medical officer, Dr Ronan Glynn has again praised Limerick for its swift response to Covid-19 in recent weeks, saying that it shows "how people, working together, can take control and turn the tide on this virus".

In a weekend message to the public, Dr Glynn urged people to continue following the guidelines, particularly for those in Donegal and Dublin, who are now subject to 'Level 3' restrictions.

This follows the Government's instructions to all third level institutions to move all classes to online, where possible.

Dr Ronan Glynn on how each of us can live safely with this virus over the coming months. Do not underestimate the value of your individual actions. Please stick with this and together we will get through #COVID19 #StaySafe [for subtitles/closed captions, select "cc"]. pic.twitter.com/HdO92ycHBa

The University of Limerick has contacted its some-17,000 students to not travel to Limerick if their full programme is being taught online over the next two weeks.

Just hours before Dr Glynn's praise, Taoiseach Micheál Martin appeared to cause some confusion and consternation after he said that Limerick may require local restrictions in order to slow down the virus.

Speaking at a jobs announcement in Cork this Friday, he said Nphet is "very concerned" about the spread of the virus in cities including Limerick.

He made the comments days after Dr Glynn praised Limerick, Tipperary and Leitrim for its response to the a recent surge in cases.

For weeks between August and September, Limerick had the second highest incidence rate per 100,000, behind Dublin. Limerick City North had a higher incidence rate in Dublin at one stage.

But this, as pointed out by politicians, has massively decreased, rendering Limerick one of the best performing counties for tackling the pandemic at present.

Hey @MichealMartinTD - will you please stop unnerving people in #Limerick - our rate has dropped by from 56.4 to 34.9 in a Week - also According to @ronan_glynn Limerick people have done a great job in combatting #COVIDー19 pic.twitter.com/r5zaGTeIwX

Sinn Fein TD Maurice Quinlivan said that the Taoiseach "has to be more careful with his utterances and in citing certain cities and Counties—this is causing unnecessary stress to many people, communities and businesses".

Sinn Fein’s health spokesperson, David Cullinane TD said on social media that talk of well-performing counties, such as Waterford, Limerick and Tipperary, facing restrictions "is unfair and not inevitable".

So far, there have been more than 916 confirmed Covid-19 cases since it was first detected in Ireland in February.

According to the latest CSO statistics, there have been two new deaths associated with Covid-19 in recent weeks—the first since the week of July 24.