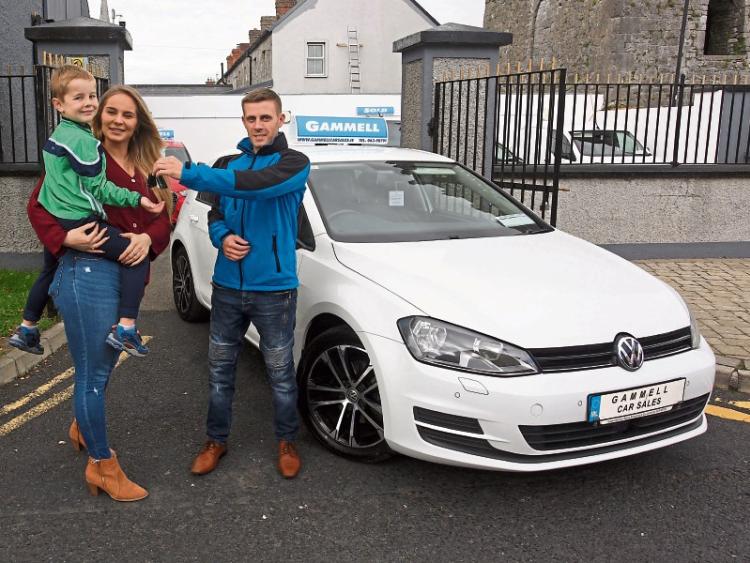 AFTER being run off the road by two ‘boy racers’ Kayleigh Yeoman has experienced the kindness of strangers for the second time.

The former Operation Transformation leader was left bleeding and concussed in her Nissan Qashqai that was stuck in a ditch on the Murroe to Annacotty road one night in mid-August.

Luckily for pregnant Kayleigh, it was Murroe man Tim Maher who came around the corner. For the next hour he took care of the mum of two children with special needs, rang gardai, put her into his car and flagged down traffic with the torch on his phone. The only problem was due to the concussion and shock Kayleigh couldn’t remember his name.

She messaged the Murroe Facebook page, who shared her story as did limerickleader.ie and Tim was found. They were reunited and kind-hearted Kayleigh thanked Timmy in person.

“He saved my life and saved someone else’s life. The back of my jeep was out on the road. It was pitch black and my car was black. All the electrics went after the crash so I had no lights. If somebody else came around that bad bend they wouldn’t have seen me. If they hit my car we both would have been killed. Tim is a hero,” said Kayleigh, who lives in Murroe.

However, as her Nissan was written off Kayleigh was left without transport to get her autistic six-year-old son, Noah to school or her daughter Fiadh, 3, to Temple Street Hospital for appointments for a rare metabolic disorder.

That was until Michael Gammell, of Gammell Car Sales in Kilmallock, rang her. He has given Kayleigh a 2007 BMW 318 for free. And it certainly isn’t for publicity as the Leader had to twist his arm to get him to pose for a photo and say a few words.

“I read the story on the Leader and said I would give a ring. If we can do something to help we said we would. She went though a bad experience and we’re only delighted to help her. It will be a comfortable car for her and her children,” said Michael. The ‘beamer’ is valued around €3,000. He gave Kayleigh the car in the photo to keep her going while a mechanic gave the BMW a once over.

“The last thing I want to do is give her a car and she have problems with it. And even if she did I would have no problem taking the car back and giving her another car. It is taxed until 2021. I said I would throw a few pound towards the tax for next year.

“It didn’t bother me about photographs and things like that. Look, she is badly stuck for a car and we’re not doing something like this every day of the week. I was talking to her and you know by someone that she is very genuine. It will keep her going anyway,” said Michael.

Kayleigh thanked Michael “so much for getting me and my little ones back on the road after such a horrific car accident”.

“And to everyone who has been in touch, sent cards or wished me well on my recovery and pregnancy in Murroe village. Of course, I once again cannot thank Timmy Maher enough for stopping, calling emergency services and preventing further accidents on the road.

“I am overwhelmed by the kindness of the people of Limerick. We have such an amazing community that never fail to come together to help in difficult situations.

The kindness of Micheal Gammell is indescribable and I will forever be grateful to him,” said Kayleigh.