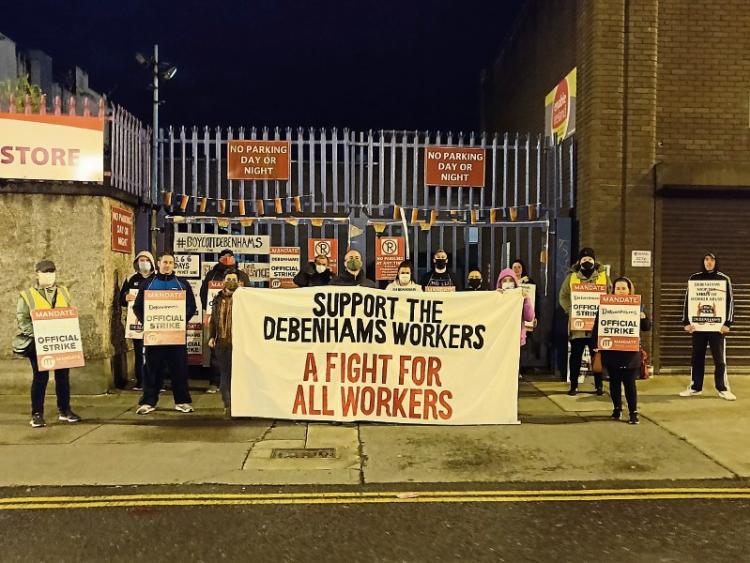 FORMER Limerick Debenhams staff stopped the delivery of boxes for packing stock into the city store overnight, it’s been claimed.

Workers who were let go just before Easter after Debenhams Ireland was wound-up have maintained a constant picket around the old Limerick store at Sarsfield Street in a bid to secure their redundancy dues, which have not yet been paid.

By stopping the exit of stock from the store, they feel they are playing their final card, by depriving the liquidator of the company’s assets.

And in the early hours of this morning, it’s been reported, a truck attempting to deliver boxes for packing stock was stopped by ex-staff who are maintaining an around-the-clock watch at the store.

The truck turned away after workers converged on site within 15 minutes of an alert going out.

David Vallely, a spokesperson for the Socialist Party who have been supporting the workers in their stand, said that it represented "a victory for the workers."

He added: “The liquidators KPMG and government must be made to realise that there is no resolution to this dispute other than for them to concede to pay the workers what they're owed. Tonight represents a show of strength on the part of the workers. Over six months on in this struggle and they are still able to respond within minutes to an attempt on the stock at two o'clock in the morning. It's clear that the workers are not bluffing when they say that pickets will remain on the shops 24 hours a day, seven days a week and that no stock will be allowed to leave until they are given guarantees of a just settlement.”

Mr Vallelly urged government to help bring the dispute – now into its 167th day – to a close by acting to ensure workers are paid the two weeks pay per year of service they are owed on top of the two weeks’ pay they are statutorily entitled to.

The Limerick Leader has contacted the liquidator KPMG for comment.