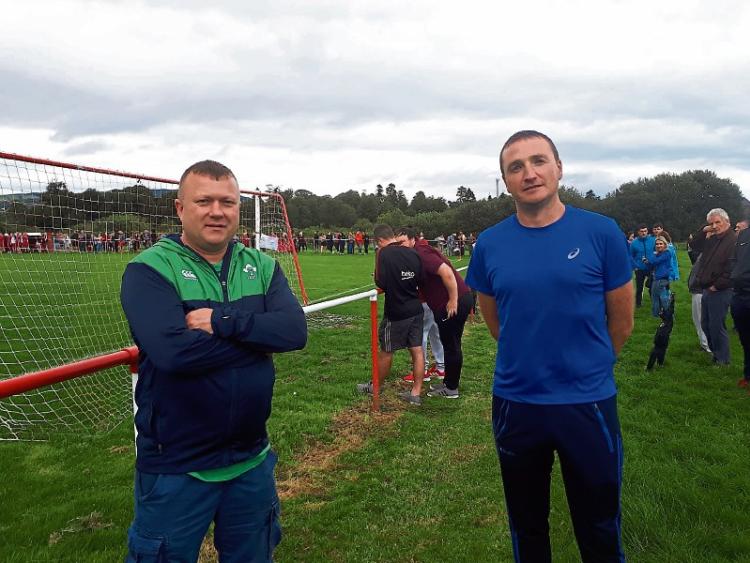 Principal Tiernan O’Neill, right, with Eddie Costelloe who donated to the cause

THE national school in Moyross has teamed up with the local parish church in a bid to develop a ‘wellness hub’ to support the community’s mental health needs.

A campaign is under way on the city’s northside to raise €500,000 to build the hub adjacent to Corpus Christi school.

It has received a boost thanks to several philanthropic donations and a gift of money from local man Eddie Costelloe who won half a million euro in the EuroMillions.

School principal Tiernan O’Neill said: “From the school’s perspective, it’s all well and good supporting the academic competencies of the kids, but if you’re not supporting their emotional competencies, they are not going to fulfil their potential.”

Corpus Christi has secured the support of Dr Declan Aherne, the former head of counselling at the University of Limerick.

“We realise the mental health needs that are there and it’s important that people are beginning to realise that it’s okay to say you’re not okay, and there are supports out there. Sadly over the years, like lots of communities, Moyross has been impacted hugely by a number of tragedies as a result of people suffering from poor mental health. We want to ensure now we are intervening at an early stage and giving children the best opportunity to shine,” the principal added.

It’s envisaged the facility would provide counselling for children, counselling for adults, play therapy and art therapy. There would also be space within it for personal development groups.

Mr O’Neill said: “I’d see it as a one-stop shop for mental health support. It’s a project that is genuinely rooted in the community. It’s driven by the community, it’s about early intervention.”

Indeed, locals have rallied behind the cause with a recent soccer match raising money for the project, while Limerick City and County Council has also rowed in support.

“A key indicator in terms of fulfilling life’s opportunities is where we can engage young people socially and emotionally. It’s going to allow kids to maximise their potential,” he concluded.