'The class of 2020 has been resilient': Delight as 2,500 students in Limerick receive Leaving Cert results 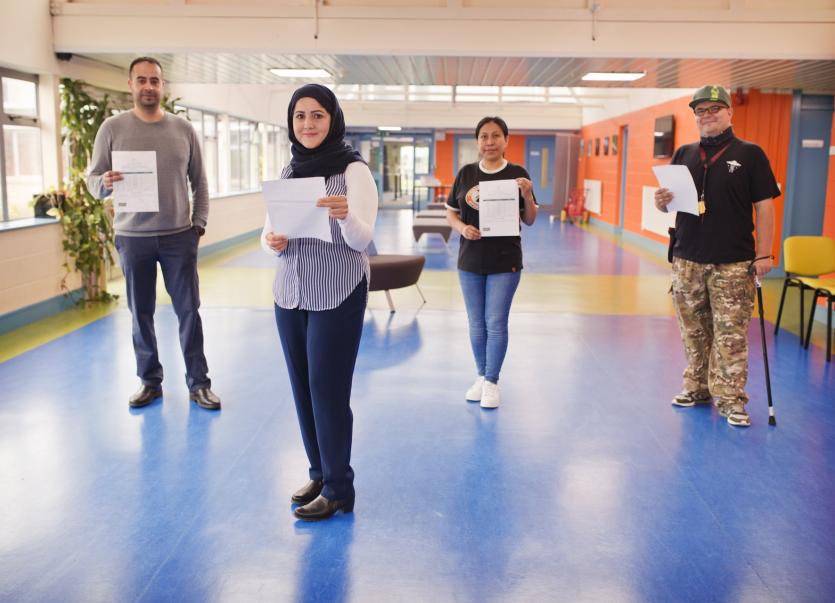 ON A NORMAL results day, students and parents would make the long walk through the school hall, one as teeth-chatteringly nervous as the other, impatient to unsheathe that single piece of paper from its envelope.

But this is no normal day. School halls and central areas are empty and bare, devoid of the clamour and bustle, as students have been accessing their Leaving Cert results from the confines of their mobile phones and laptops.

It is an historic day for the some-2,500 students in Limerick, who have kept their studies bedroom- and Zoom-bound and have received their results without ever sitting an exam.

But the long six months was certainly worth the wait for eight young men at Ardscoil Ris, who scored more than 600 points; four of whom clinched a perfect 625.

Principal Tom Prendergast said he was delighted for the class of 2020, and that it was a “sense of relief” for the students. Around 55% of his Leaving Cert graduates scored 450 points and higher, he said.

On the other side of the city, Crescent College Comprehensive have two students who also scored a perfect seven H1s.

Eamonn Tuite, who was the year head, commended his Leaving Cert students.

“They were the most fantastic bunch of kids. They were no hassle, they were really hard workers. They were lovely, they looked out for one another. They were great.”

Mr Tuite added that if the students who got top marks were anxious about the new grading system, they certainly didn’t show it.

A total of 161 students of Coláiste Chiaráin in Croom received their results at home as opposed to at the school.

“Many teachers have received emails today from students and I have received some lovely emails from parents as well who are very complimentary. Our guidance and counselling team have been made available to the students over the phone and for the week if they want to come in. They can make appointments and we can facilitate them. I think it’s in the days ahead that our students will need more guidance particularly as we face into the CAO options and colleges and choices.”

This year’s group, Mr O’Sullivan emphasised “has been through a lot”.

“The class of 2020 have been resilient if nothing else. From our own point of view they have been a fantastic bunch and there have been some really excellent results.”

But the new grading system has been the main talking point for many of the principals this year.

Pat Talty, principal of St Clement’s College on South Circular Road, said the way they have received the results has been different this year.

“We’re very pleased with them so far. However, the way we received them this year, it has taken longer to analyse them. And then there’ll have to do a further analysis with regards what they actually got and what the school submitted. That is going to take a long time due to the number of students."

He said usually, half the Leaving Cert students would arrive at the central area to receive their results, with light snacks available.

“But there has been none of that. We didn’t have one students attend the school, even though they were invited to and, by appointment, if they wanted to do so. But we’ve had nobody in. But really what’s different this time is that we are going out there to get the information, rather finding it out in-house.”

Other years, he would be sitting down at a table, sifting through each certificate, to gauge the results of all the students.

Mr Prendergast said that it has "been a long road" and that Friday's CAO results will be the "key moment".

“It would seem that results nationally are up, from media reports, and then consequently, college course CAO points may rise as well. It’s really one step, and then there’s another step to come on Friday," he said.

On Monday, students will be able to see the initial results submitted by teachers back in June.

“It is a sense of relief. It has been such a long road since March 12th and the uncertainty of what was going to happen, and the twists and turns that took place. This was always a key moment—Monday, September 7—once we knew the results were going to be published. It is a sense of relief, but again, it is a pause until the CAO offers come out on Friday.”

Students will be invited to sit an exam if they so wish on November 16.

The Mayor of the City and County of Limerick Cllr Michael Collins congratulated students across Limerick city and county on receiving their Leaving Certificate results this Monday.

Mayor Collins said: “It has been a very strange and difficult time for Leaving Cert students, initially with schools closed suddenly and the uncertainty about the exams taking place, and then waiting longer than usual for your examination results.”

“But we have finally arrived at results day, and I would like to congratulate each and every Leaving Certificate student on their results today. I hope that you are happy with the grades you have received and that you can look forward to the near future with confidence.”

“I wish you all the best in whatever path you take, whether that be going to college, taking on an apprenticeship or starting out on your work career.”

“And I would urge you to remember to celebrate your results responsibly, Covid-19 remains with us and continue to follow the health guidelines advice about parties and indoor gatherings.”

The Leaving Certificate student helpline, at 1800 265 165, which is provided by the National Parents Council post-primary will be available from 11am for students to reach a guidance counsellor with any queries that they may have.

The helpline is staffed by qualified guidance counsellors and will continue to operate until September 16.

Send us your photos by emailing news@limerickleader.ie or by WhatsApp at 0860266470