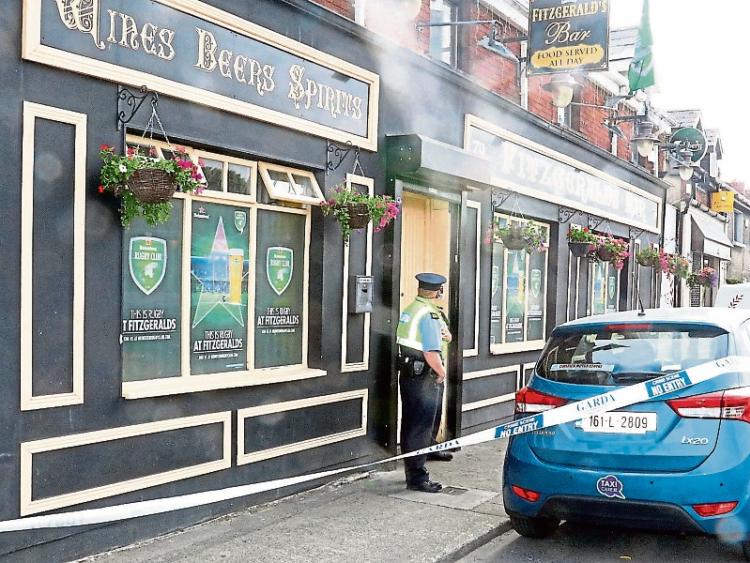 Gardai at the scene of the fatal stabbing - PICTURE: Brendan Gleeson

A 24-year-old man sustained six stab wounds in a Limerick pub including two fatal ones to the heart and jugular vein, a murder trial has heard.

Assistant State Pathologist, Dr Margaret Bolster, has given evidence in the Central Criminal Court trial of Mark Crawford (43), who is charged with murdering Patrick 'Pa' O'Connor in Limerick city over two years ago.

The expert witness said the deceased's cause of death was haemorrhage or bleeding shock due to stab wounds to the thorax and neck.

Mr Crawford, who has an address at Quarry Road, Thomondgate has pleaded not guilty to murdering Mr O'Connor at Fitzgerald's Bar, Sexton Street, in Limerick city between July 7 and July 8, 2018.

In her evidence, Dr Bolster said the first stab wound was to the deceased's jugular vein on the left side of his neck and was 10cm in depth. The witness said she found a second stab wound to the back of his neck with a depth of 6.5cm.

The jury also heard that a third stab wound was inflicted on the left side of his thorax or chest. Dr Bolster said it was 2.1cm in length and extended through his fourth rib and right ventricle. The wound penetrated through the deceased's heart sack and went to a depth of 10cm, she added.

The fourth stab wound was situated on the back of Mr O'Connor's left upper arm and was 3cm in width, she noted.

Another stab wound to his left upper arm was 2.2cm in width. The sixth injury was to Mr O'Connor's left forearm and was 3.2cm in length, she concluded.

She said that cocaine was also detected in the deceased’s blood.

In summary, Dr Bolster said Mr O'Connor sustained six stab wounds including two fatal ones to the right ventricle of the heart and left jugular vein.

“The through and through stab wound to his left forearm could be interpreted as a defence injury," she said.

The witness said that Mr O'Connor's cause of death was haemorrhage or bleeding shock due to stab wounds to the thorax and neck.

Under cross-examination by Patrick McGrath SC, defending, Dr Bolster agreed that the two fatal wounds were those that went into the heart and neck and the other injuries were less serious.

She further agreed that the two fatal wounds were consistent with both men having been standing at the time.

Under re-examination, Mr Fitzgerald asked the witness if the wounds were more consistent with both men standing because of the direction of the wounds. Dr Bolster agreed that this was the case but said that she could not rule out if both men had been sitting down at the time.

Barman Cyril O'Connor previously testified that he saw Mr Crawford lean into Mr O'Connor and use his right hand to hit him as he [Mr O'Connor] sat in the chair and only later realised that the deceased had been stabbed.

Under cross-examination, Mr McGrath put it to the barman that he was mistaken about Mr O'Connor sitting in the chair and suggested that both men had "stood up to each other" before Mr Crawford had stabbed the deceased a number of times as he had felt under threat.

The witness denied this was the case saying: "It's a photograph in my head of the accused holding Mr O'Connor and striking him."

In his opening address to the jury on Monday, Mr Fitzgerald said that Mr Crawford is accused of stabbing Mr O'Connor to death in a Limerick bar after a row over payment for cocaine.

The prosecution barrister said the accused man and the deceased had been taking cocaine together on the night and Mr O'Connor was aggrieved that he had paid €100 for cocaine.

The barrister said evidence will be given that the accused admitted stabbing the deceased to gardai but said he had acted in self-defence out of concern he was going to be attacked as he was not from that part of Limerick city.

The trial continues this afternoon before Ms Justice Tara Burns and a jury of 11 men and one woman.