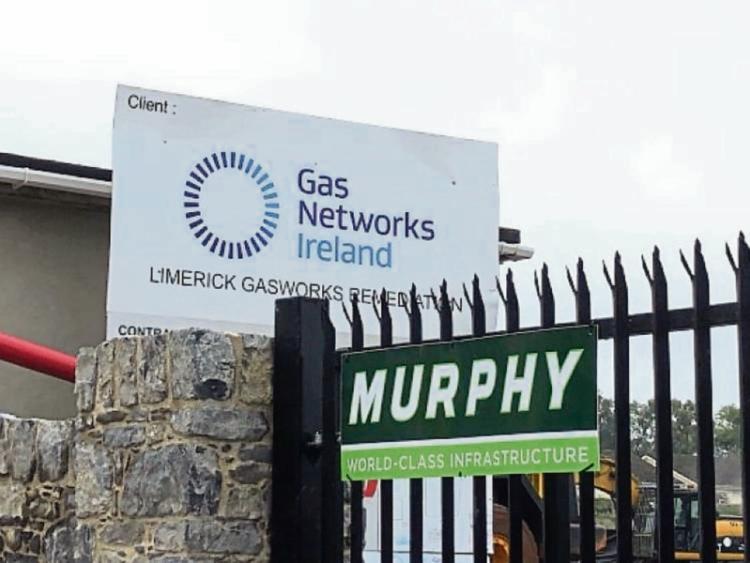 The Gas Networks Ireland site on the Dock Road

WHILE some members of the public were hasty to say farewell to Gas Networks Ireland in Limerick city, two people by the names of Ellen and Francis were adamant that they stay.

The Gas Networks workers were doing the final touches of soil stabilisation at the Dock Road and O’Curry Street site, and we were due to wrap up within the last few days.

It had been part of the schedule for months. But that all changed utterly when storms Ellen and Francis hit Limerick over the past two weeks, delaying progress for up to six days.

Gas Networks Ireland has come under fire from some members of the public, including business people, over the emission of odours. The company has maintained that the emissions were “not toxic”.

As part of the multi-million euro project, 80,000 litres of coal tar is to be taken off-site in tanks and will be shipped to Finland via the Limerick Docks, a spokesperson for Gas Networks Ireland confirmed.

This contaminated material is a common by-product of historical gas making, which had occurred at this site from the 1850s until the 1970s. There were 135 truck movements of the material.

A spokesperson said that the company provided an update, by way of letter drop, to 600 homes and businesses.

She said that once stabilisation works are completed, a final surface layer will be installed by September 11, and then the contractor “will begin demobilising from site”.

A spokesperson said it apologises for any inconvenience caused.

Project manager John Collins said while they “have made good progress and have crossed a major hurdle with the removal of this material from the site, we are disappointed that the weather has slowed us in recent weeks.