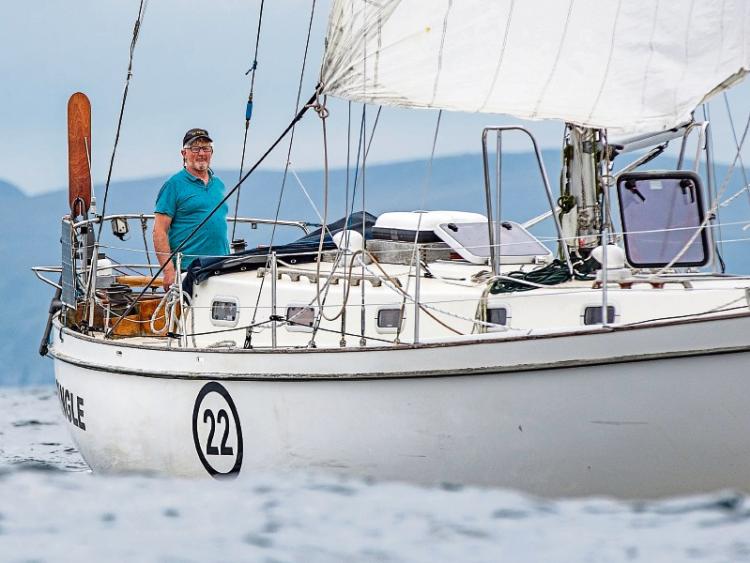 MOST of us would have remained indoors when Storm Ellen battered our shores last month.

But instead of being tucked up in his bed at home, top Limerick sailor Pat Lawless was out on his own in the middle of the North Atlantic Ocean taking the gale in his stride – and coming out the other side.

Pat, who hails from Corbally, but now lives on the Kerry coastline, was taking part in a “dry-run” for the Golden Globe race which he hopes to complete in 2022.

In a bid to recreate similar conditions, he sailed from Dingle down to the Azores off the coast of Portugal.

It was only on his return journey to Ireland he realised he was going to be right in the middle of the storm, which saw Limerick placed on a yellow warning, spot flooding, and thousands of people left without power.

“When I got to the Azores, I got a forecast on my phone saying there was a depression coming, or a cyclone. I headed for it on purpose. If you’re going into the Southern Ocean, you’d want to get used to weather like that. Before I got to the cyclone, I was going over in my mind whether I’d make it there. I didn’t have a forecast on board as in the Golden Globe race, there is no technology allowed,” he said.

Great article by @Nick468official in @Limerick_Leader today on @PatLawless trial solo run to the Azores and back to Dingle. Pat had a bit of wind to deal with on the return leg with Storm Ellen.. #GGR2022 #ggr22 #sailing #dingle #limerick #Ireland #kerry #GGR #wildatlanticway pic.twitter.com/9NCl7aWzsg

Experienced sailor Pat, who is the son of legendary round-the-world yachter Pat Sr, found himself in the centre of the gale leaving his family back in Limerick panicking, with no way of getting hold of him.​

Taking up the story, Pat said there was an intense peace when he arrived in the centre of the storm.

He explained: “I wound up in the middle of the cyclone for two-and-a-half hours. It was a beautiful night, there was no wind and the stars were up above in the sky. The dawn came, and it was a bit rocky as there was no wind so I put up a few extra sails.”

That was quite literally the calm before the storm though.

“After two-and-a-half hours, it started to blow a bit. Then I got a right whack from a force nine or 10 gust. A lot of sailors would not have gone out in this weather. But because I was a fisherman for so many years off the west coast of Ireland, we went fishing whatever the weather. I was used to it.”

“It was going between 10 degrees and 35 degrees. You’d be rocking with the waves. You’d have waves crashing off the side of the boat. Sometimes they would be noisy. You’d be worried when you feel a bang and you can feel the jolt of the boat being thrown. A lot of waves were coming over. You’d see water flying over the skylight. In the beginning, you’re anxious, but when you realise the boat is well able for it, you kind of relax,” he added.

Personal safety is what immediately kicks in when this happens, Pat added.

“When you’re going on deck, you put on all your skins and boots, a safety harness and clip yourself on different places in case you get a knockdown. If you get knocked out of the boat, you’d need to climb back in.”

Asked if he feared for his life when he hit the storm half way between the Azores and Ireland – just off France’s Bay of Biscay, Pat added: “You wouldn’t. You’d be extra cautious. People break their ribs when they get thrown around the boat. You’d have to be quite careful, hold on quite tight. Your hands become like vice-grips as you stay hooked to the rail.”

To the relief of his friends and family, Pat arrived back into Dingle on his Saltram Saga 36.

This will now go for repairs over the winter before Pat sets sail again in 2021!

This time, he’s looking at trips to Greenland or a transatlantic voyage to the USA.