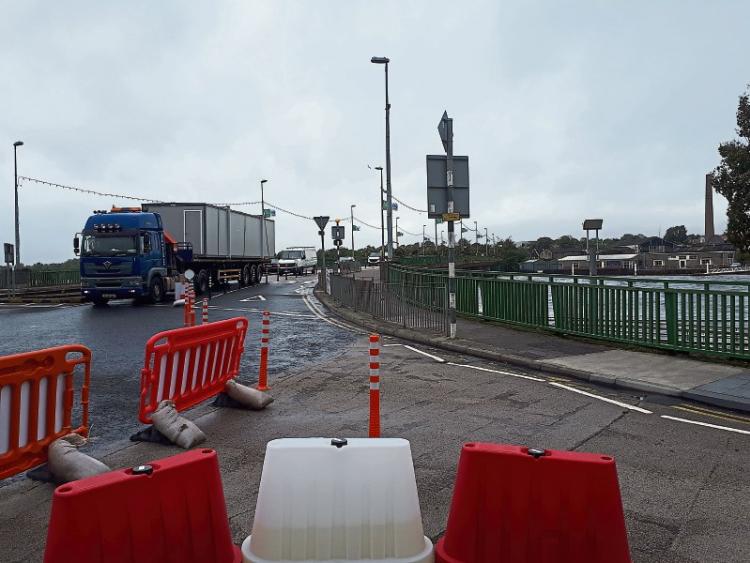 The terminus of the Shannon Bridge cycle lane

LIMERICK Council has confirmed the cycle lane at Shannon Bridge, which was installed as part of the Covid-19 mobility plan is to be retained.

The news, revealed this Monday teatime, will come as a boost for Limerick’s cycling community, and comes following the delivery of a petition containing more than 1,100 signatures in support of its retention.

However, on the other side of the argument, there are fears the move will lead to traffic chaos once schools go back next week.

In a further boost for business, another key measure introduced as part of the Covid-19 mobility plan, free parking in the city centre on weekends, is also to be kept, while the short-stay units for 'click and collect' will also be maintained until the end of this year.

Parklets will be kept on through winter, while the 25 kilometre per hour speed limit will also remain in place.

But, Limerick Council has confirmed that the pedestrianisation of one-block of Catherine Street at weekends will be discontinued from the end of this month.

The local authority said only a "small number of commercial premises" benefitted from the temporary meaasure.

The axe will also fall on other temporary pedestrianisation measures, including those at Howley's Quay, Nicholas Street and Denmark Street.

The traffic restriction measures on South Circular Road, O’Callaghan Strand and the City Quays will also cease as scheduled on August 31.

In an email to councillors, seen by the Limerick Leader, Dara McGuigan, the senior executive officer at Limerick City and County Council, confirmed: “The cycle-lane on Shannon Bridge, which was installed during the summer months as part of the Guiding Limerick Through Covid-19 plan is to be retained.  The re-purposing of one of the in-bound lanes on Shannon Bridge as a two-way cycle-lane was based on the need to provide safe cycling access to the city centre from the northside of the city.”

He added the provision of more cycle lanes will be identified in the proposed new transport strategy.

“Shannon Bridge had been selected for the trial as it had the space to implement the changes whereas the other city bridges did not,” he said, “The cycle lanes have worked well during the trial period with user numbers exceeding those prior to the measures being put in place. As school  traffic will increase in the coming days  we are working proactively with schools in the area and our traffic management department on this issue.”

Fine Gael metropolitan council leader Daniel Butler has welcomed the announcement, but acknowledged there are strong feelings on both sides of the fence.

"There will be some people happy, some people disappointed. But I think overall, what people need to view the plan is as an opportunity for learning. We've trialled some measures, some have worked, others didn't work. The executive has acted accordingly in retaining what they feel have worked and removing those less effective. It was challenging, a good opportunity to loan, and we shouldn't be afraid to try new things out in the future," he said.

Mobility Plan Announcement
Shannon Bridge cycle lane is to be retained.
As are 25kph speed limits
Free weekend parking & click & collect spots & outdoor furniture licensing to be retained
Parklets to be retained & further ones added
All other measures to be removed

Some really positive news today from @LimerickCouncil, Shannon Bridge cycle lane staying, so are the parklets, supports to businesses are continuing.
Unfortunately some traffic calming measures are being reversed, but having gotten the taste for them and LSMATS on the way‍♂️‍♀️ https://t.co/NgIEG7glkj