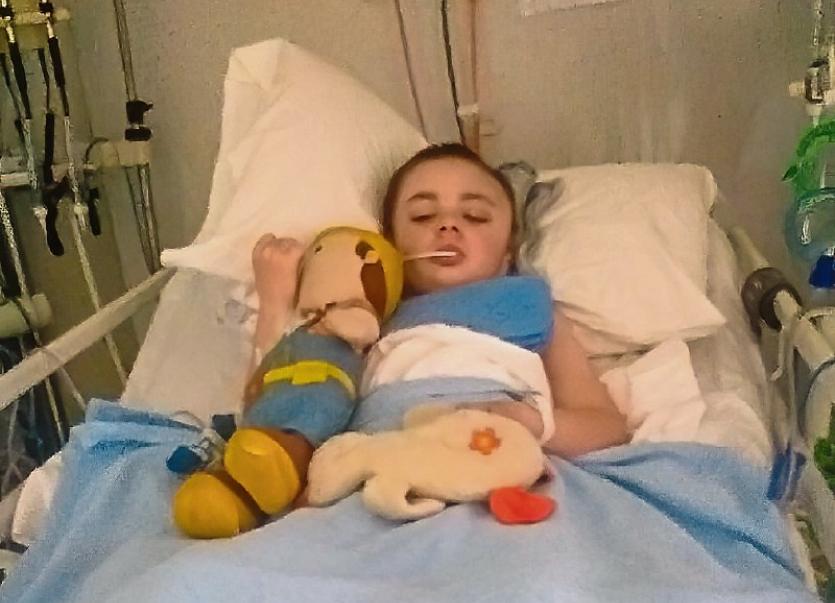 Dáithí Lawless is being treated at Temple Street Children's Hospital

LIMERICK is being asked to Rise4Dáithí and help bring a little boy home to his loving family.

In April, Dáithí Lawless, aged 10, was involved in a “devastating road accident” near his home in Cush, Martinstown, while cycling his bike.

After being airlifted to Cork, Dáithí was moved to Dublin where he currently remains, receiving 24/7 care in Temple Street. To support Dáithí and his parents, Antoinette and Liam, a group of locals have joined together to form the Rise4Dáithí fundraising group.

One of those, Jack O’Shea, said the goal is to get Dáithí “home where he belongs” and back on the sideline cheering on his teammates.

“Dáithí’s progress has been remarkable and he is a true fighter but has such a long road ahead and although still largely unknown, every day is a day of hope for Antoinette and Liam now. Their journey in a sense is really just beginning as they face a long road of rehabilitation with Dáithí. This is now the time when the community decided that we could begin to do something to help the family and try to give them one less thing to worry about.

“They will need to make alterations to their home to accommodate Dáithí when they can bring him home and this is the priority – to get Dáithí home where he belongs. As they will have months if not years of therapy, they will also need suitable transportation for the literal long road ahead,” said Jack.

He said the spirit in the community since it happened is “so strong but it is just a reflection of the strength of Dáithí and his family”.

“There was an outpouring of support for the family and with the lockdown and restrictions that were tough on everyone, as normally you could call to them and offer your help but, with Covid, this was impossible. Many people offered to help out in any way they could but there was so little known about the potential outcomes, that it felt futile and premature to even think about it,” said Jack.

But now the time is right and a Rise4Dáithí Facebook page and GoFundMe page has been set up.

Dáithí, true to the meaning of his name (swift), has been battling through his injuries with such determination and bravery that it has captured the imagination of all that know him and those that don’t, said Jack.

“A warrior on the field of play with Staker Wallace/Cois Laoi Gaels GAA team and Castle United soccer team, he is every bit the determined player on the darts scene and has been in many a tournament for his young 10 years.

The Rise4Dáithí GoFundMe page was only set up over the weekend and already has raised over €13,000 of the €50,000 target.

The fundraising group is made up of Winifred Crowley, Maria McCormack, Melissa Barron, Breda Moloney, Noreen O’Shea Sheehan, Samantha O’Shea, Helen O’Flaherty, Shane Lyons and Jack. They are planning several events subject to the Covid situation over the coming weeks and months. These will include a wear your jersey day for the surrounding schools children who are eager to do something for their pal; a golf classic in Ballyneety; a drive in bingo at Staker Wallace GAA’, tractor run from Bulgaden; a walk/run/cycle; a Duck Race and much more.

“We've had a great start to the campaign and as a group we won't stop until we achieve our goals,” said Jack.