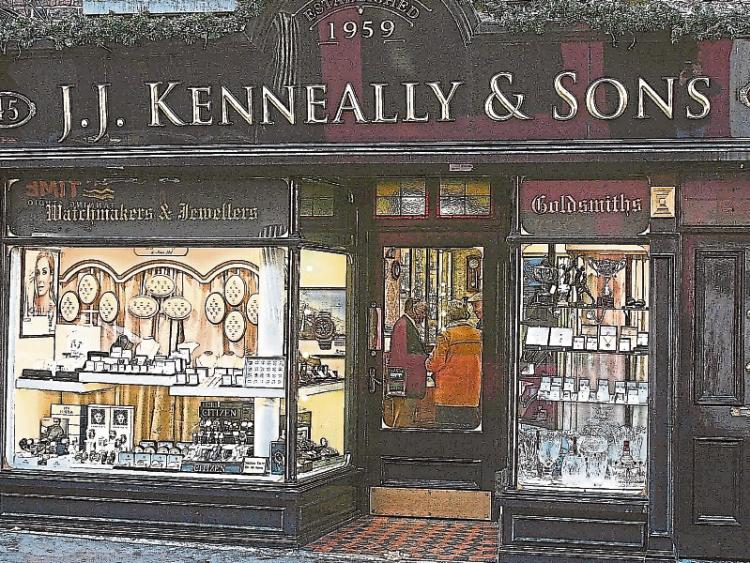 A MAN who robbed more than €50,000 worth of jewellery from a well-known Limerick business has been jailed for five years.

Patrick Hogan, 38, who has an address at Castlegrange, Church Road, Raheen has also admitted causing almost €40,000 worth of “wanton damage” at JJ Kenneally Jewellers, Wickham Street on August 30, 2017.

Detective Garda Donnacha Coakley told Limerick Circuit Court the defendant, who was armed with a slash hook  arrived at the premises on a bicycle shortly before 4.30pm.

After entering, he began shouting and threatening workers who retreated to a secure room for their own safety.

Mr Hogan then used the slash hook to smash a number of glass cabinets and display units before fleeing with an assortment of jewellery in a rucksack.

The father-of-two was subsequently identified on CCTV and his movements before and after the robbery were tracked.

John O’Sullivan BL, instructed by state solicitor Padraig Mawe, said “graphic footage” was obtained from inside the premises and that a “very considerable amount of damage was caused”.

Having been arrested following a separate robbery incident the following day, Mr Hogan provided gardai with details of an alibi who he claimed he was with at the time of the incident.

However, this individual said he was not in his company and had, in fact, given him a bicycle.

Barrister Lorcan Connolly said his client had been under “severe pressure” to repay a substantial debt relating to a significant cocaine seizure in September 2008.

While Mr Hogan and two other men were subsequently jailed, Mr Connolly said the defendant had been threatened by criminal elements following his release.

During interviews following his arrest in relation to the robbery offences, Mr Hogan told gardai he owed €250,000 but that he didn’t have “that kind of money”.

During follow-up searches, gardai located a double-barrelled shotgun and a quantity of ammunition at a house at Bengal Terrace and Mr Hogan admitted he had them for his own protection.

Mr O’Sullivan  said the firearm had been stolen sometime earlier from a car in County Laois and that there was “no sinister ballistic history”.

Seeking leniency on behalf of his client, Mr Connolly said the father-of-two had been threatened and was under pressure from criminal elements at the time.

“It was a bolt out of the blue, he was under significant pressure. He needed money and he needed it fast.”

Mr Connolly asked the court to note his client’s admissions and his guilty plea and he submitted Mr Hogan is not the kind of person who would discharge a gun at people.

Imposing sentence, Judge Tom O’Donnell said the incident at JJ Kenneally’s was a terrifying experience and he noted the victim of the attempted robbery which occurred the following day has stopped working because of his ordeal.

He said the amount of property stolen and the severity of damage caused at the jewellery store was a significant concern along with Mr Hogan’s previous convictions.

The judge accepted he was under duress and he noted his cooperation and guilty plea.