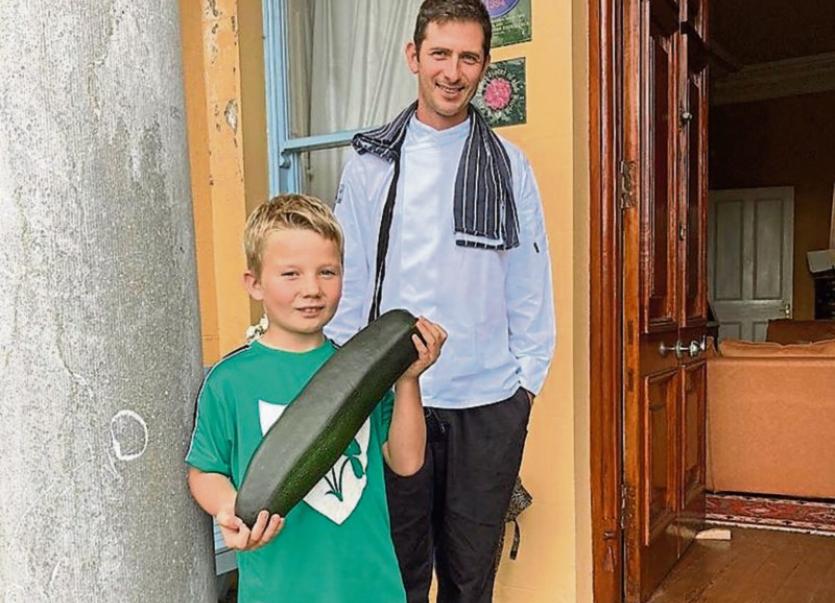 Maurice Ahern is already a dab hand at rearing cattle but he also has green fingers when it comes to growing vegetables.

And he has even got the thumbs up from a multi-award winning restaurant and chef. The nine-year-old from Knockfierna made his Holy Communion two years ago.

Instead of putting his money towards a Playstation, Maurice wanted a polytunnel. Mum and dad, Carol and Seamus duly obliged.

Last year, his tomatoes were such a success that Tom O’Gorman sold Maurice’s tomatoes in his shop in Granagh. At the start of lockdown, Maurice planted potatoes, carrots, courgettes, cucumbers, tomatoes broccoli and red onions.

Carol dished them up every night but one courgette had been hiding behind the tomato plants. Carol said they learned that when a courgette grows big they are called marrows. And as the photograph shows this one certainly grew big!

“I rang the Mustard Seed to thank them for a meal we recently had and said Maurice was going to drop down a marrow. It was so big that we wouldn’t use it. They were delighted,” said Carol, who has two more children Mary Kate, 14 and James, 5. Carol and Maurice headed to the Mustard Seed where they met the head chef Angel Pirev, who gave them some tasty recipes.

The owner, John Edward Joyce, was out at the time but had left €10 in an envelope to pay for the marrow.

“He said it was for Maurice to buy more seeds for next year. I thought it was a real touch of class and what wonderful support and kindness to the younger generation. It was such a nice thing to do,” said Carol. The Mustard Seed shared the photo on Instagram and Maurice said, “I’m famous!” after it got over 100 ‘likes’.

The Ahern family are expert showers of cattle but Maurice would surely have won a prize in the vegetable sections if only there were agricultural shows this year.

“He was here last week. He had a fiver in his pocket and he coudn’t wait to spend it buying rhubarb. He is really keen. He is such a lovely young fellow, he is an absolute dote,” said Lynda. Carol said Maurice “loves being outdoors” and Lynda said gardening is a great outlet for children and especially at this strange time.

“It is good for them to be outside and so good for their heads especially at the moment when we are so worried about the effect this is having on them. When they grow their own vegetables you can see the joy in their faces - they are proud as punch. They just love it,” said Lynda.