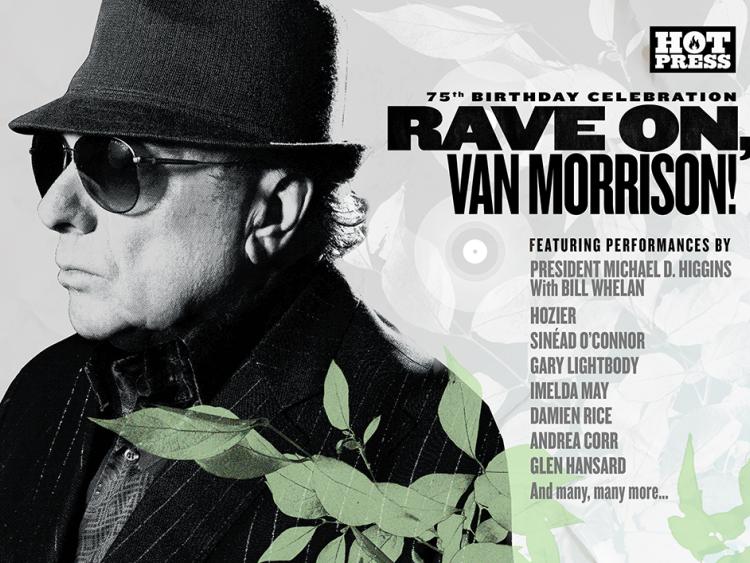 Ireland’s Hot Press magazine has curated musical tributes to the singing legend, by 75 exceptional artists, to be broadcast to the world via YouTube, in August and September

The schedule kicks off with on August 4 with Andrea Corr  performing ‘Moondance’ – with a slate of marvellous performances set to follow, in what will be a powerful declaration of strength by Irish musicians and performers..Rave On, Van Morrison will also be supported by the Department of Foreign Affairs and its global diplomatic network, and by Tourism Ireland.

President Michael D. Higgins said: "Van Morrison is one of the outstanding songwriters and performers of the past 60 years and has been a powerful inspiration to successive generations of musicians and artists all over the island of Ireland, and abroad. It is a great privilege to be part of this extraordinary celebration of Van’s work, on the occasion of his 75th birthday. Long may he continue. Rave on, Van Morrison.”

Other artists who will perform Van Morrison songs as part of ‘Rave On, Van Morrison' include at least two of the four Irish artists who have achieved US No.1 albums, Hozier and Sinéad O’Connor. Also performing Van’s songs are leading Irish music lights like Imelda May, Bob Geldof of The Boomtown Rats, Gary Lightbody of Snow Patrol, Andrea Corr of The Corrs, Glen Hansard, Paul Brady, Una Healy of The Saturdays, Damien Rice, Gavin James, The Academic, Moya Ní Bhraonáin of Clannad, Loah, Mick Flannery, Mary Stokes, Altan, Eleanor McEvoy, David Keenan and the rising young Dublin rapper, Malaki, among many more.

MOBO-nominated drummer and composer David Lyttle, from Belfast, has recorded ‘On Hyndford Street’, featuring the voice of acclaimed Irish actor Liam Neeson. And the multi-garlanded fiddle player Martin Hayes of The Gloaming delivers a marvellous interpretation of ‘Moondance’ on fiddle.

The full list of performances over the first two weeks is as below.