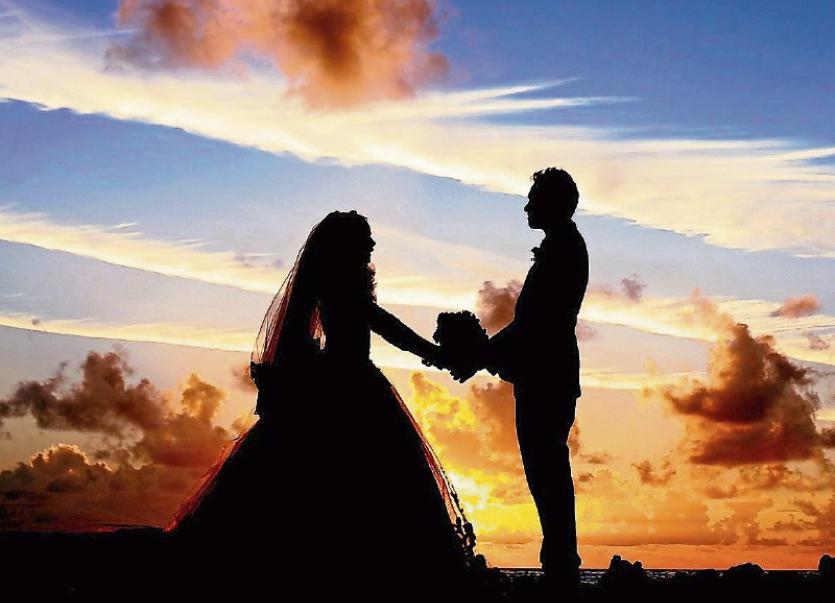 THE TRADITIONAL time for marrying in rural Ireland was Shrovetide. In the nineteenth century and on to the twentieth it was taken for granted that those who wished to marry did so at that time and at no other.

There was scarcely a parish church in the country which did not have at least one wedding on Shrove Tuesday the most favoured day of all. When this custom began records do not show but it seems to be connected with the canonical prohibition of the solemn celebration of the sacrament of matrimony during the penitential season of Lent-a regulation often misunderstood to prohibit any marriage whatever during that period.

It is probable that the popular reasoning ran thus: we cannot marry during Lent; thus, we must marry before Lent, therefore just before Lent is the proper time to marry. This was held firmly as far back as folk memory goes and has probably been part of the accepted pattern of belief for several centuries. The ecclesiastical prohibition of the solemn celebration of marriage during Lent was set forth in a decree of the Council of Trent; the Decree of Matrimony dated November 11, 1563. From Little Christmas (Epiphany) onwards the matchmakers had been busy and many unions were planned and eagerly awaited not only by the parties’ principally concerned but also by the whole district which would share in the merrymaking, feasting and drinking.

On the morning of the wedding according to historian Kevin Danaher the bridal party in the south-west of Ireland left the house of the brides’ parents in horse-traps or side cars. The bride and her parents travelled in the first vehicle, followed by relatives and guests of the bride and groom. The groom joined in along the way taking up position at the end of the cavalcade. On the return journey bride and groom travelled together in the first vehicle, with the bridesmaid and groomsman. Many of these processions were to be seen along the roads of Ireland on Shrove Tuesday morning.

Many different customs prevailed elsewhere in Ireland many of them less formal, with the various parties coming separately to the church. In parts of Donegal the wedding party walked in a group to the church headed by a violinist playing merry tunes which always included ‘’Haste to the Wedding’’ on the way there. He played ‘’ Ta do mhargadh déanta’’ (your bargain is made) on the way back after the wedding ceremony.

In some places it was customary that when the newly married couple came out of the church the groom was handed a dish or tray containing a handful of copper and small silver coins. He threw them into the air to scatter among the crowd where children and others scrambled for them. In former times a number of beggars and tramps assembled for this occasion and sometimes quarrels, and brawls occurred between them.

The whole wedding party returned to the house of the bride’s parents where feasting music singing, and dancing continued until late at night. During the return journey the wedding party was sometimes halted by boys holding a rope across the road. The bridegroom had to buy the rite of passage by giving a small gift of money. This custom still continues following a wedding in Carrigkerry Church where the local children lay a rope across the road and receive some small coins in return.

On arrival at the house her mother broke a small cake over the bride’s head to give her luck and prosperity. During the festivities the house might be visited by a party of young men from the locality masked and disguised in hats and cloaks made of straw. They were called straw-boys for this reason and ‘’soppers’ in the west Munster area. They were usually made welcome and having danced with the bride and her attendants and friends, were entertained to food and drink before they left the house. Of course, these marriage customs might be seen at other times of the year, but they were most in evidence at this time when most country weddings took place and are remembered in tradition as part of Shrove. It was far removed from the planning and presentation of present-day ceremonies.

I often wondered why little silver horseshoes are put on a wedding cake, and why they're supposed to be lucky? Many years ago, the story goes, that St Dustan, who was a blacksmith, was visited in his forge by the Devil, who asked for shoes to be fitted to his feet. The blacksmith recognised his visitor, and while fixing horseshoes to the Devil's feet, he nailed the shoes to the wall to trap him.

Although the Devil tried to free himself, his efforts were in vain. Before agreeing to release him, Dunstan made the Devil promise he would never enter a place where there was a horseshoe on the wall. Later, this was applied to wedding cakes, and the tradition continues to this day.

I've heard some folk refer to the love of their life as a ball-and-chain, in jocular fashion, of course. This reminds me of the craze that was in fashion some years ago, with couples pledging their love for each other. This was done by attaching a padlock to some well-known public monument such as a bridge across a river or railings in a park or public place. That celebrated bridge, the Pont des Arts, spanning the River Seine in Paris, has become famous for the thousands of padlocks that have been affixed to it by star crossed lovers. The padlock became a symbol of an unbreakable, undying love.

Not alone is it Parisians, but visitors to the "city of light" that engage in the heart-warming symbol of a pledge between lovers. The newly acquired padlock from the nearest locksmith's shop is usually inscribed with their names, plus some poetic term of endearment. The padlock is snapped shut and attached to the railing with all the others, and the key is tossed into the Seine. We will continue our wedding traditions next week.