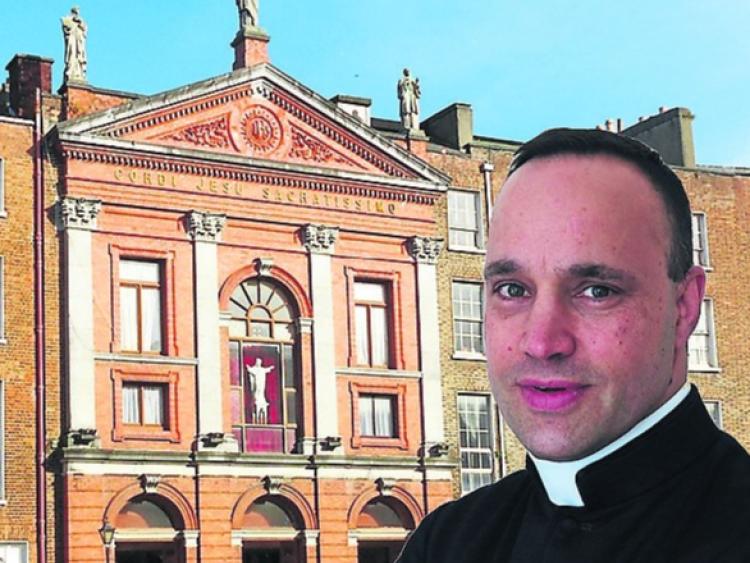 IT is always a joy for a priest in charge of a church in the city centre of Limerick to celebrate a beautiful liturgy and see people attend.

But what happens when, with short notice, the doors have to be closed? He has to explain to his faithful that from now on he will offer his daily Mass in private, but all are nevertheless very welcome to follow along online.

This is what happened when the lockdown was enacted. The whole world changed within a few weeks and an unexpected silence covered the whole city. Silence can sometimes be caused by darkness or fear. This silence reminded me of the Sacred Heart Church after its sale by the Jesuits. When the church was sold in 2006, the silence was rather sad and ominous, as no one knew if this building would reopen as a Catholic church. The only noises one could hear were the numerous “beeps” emitted by the dying batteries of the smoke alarms, which were starving for replacements.

This year during the lockdown, my mobile phone was also constantly ringing in my pocket to notify me of the reception of new messages. These hundreds of messages were requests for prayers, confessions, advice and comfort…souls were starving!

Modern technology definitely has a role to play in our vocation, as priestly life nowadays is a connected one. Last year when we installed a new sound system, I had the idea of adding some cameras to broadcast the ceremonies. The whole project was a bit expensive…I remember someone who was surprised by this “unnecessary expense”. When the project was completed however, he was happy with the result. During the lockdown, he became grateful for this modern technology and is now a proud promoter of our YouTube channel.

The silence imposed on churches this year did not lead clerics into anger or despair, even if, unfortunately, some felt abandoned by their priests during the lockdown. There was a lot of misunderstanding due to the exaggerated restrictions. The first few times I preached in the empty church, facing only a camera, I of course had a strange impression. Natural human feelings left me telling myself that only the spiders were listening to my sermon. I could easily imagine the faithful sitting in their pews, as people always like to sit in the same place in church.

During these last few months, people have certainly asked themselves: “What does a priest do when he is on his own in a closed church? He must have plenty of time to relax!” Actually, our community schedule was adapted to include additional prayers, necessary in times of an epidemic, which we recited daily before the Blessed Sacrament. The sacristy kept us busy, as well as the usual community duties and commitments, such as the laundry, bookkeeping, cooking, cleaning of the house and church, our publications, and much more.

The first day we had to close the church doors to public ceremonies, two images came to my mind. The first was a brief moment from a movie on the life of Saint Bernadette. When she joined the convent she passed through its iron gates, on the top of which were written just these two words: “God only”.

When a violent storm hits shore, all the ships’ crews are frightened and navigate their vessels from out of harm’s way, often in an uncontrolled manner, but a sturdy rock on the beach remains firm and immobile. The church is like the rock. Waves will crash against it, but it does not move, and then calm is restored.

When the whole world enters into challenging times, God nevertheless does not change, and neither does the Priesthood! When the lockdown went into effect, I thought to myself: “Now that our doors will remain closed, we must enter into a more intense life of prayer.” We extended the time of Adoration of the Blessed Sacrament in the afternoon, taking turns between the community members. We also added the Rosary and special prayers in times of plagues and epidemics every evening after the 7 pm Mass.

The notifications I was receiving began to take on a different nature…more and more people were subscribing to our channel. We started to receive messages and prayer intentions from all over the world, but also from neighbours who discovered our faces for the first time on their screens! A great community spirit was born among local residents, helping each other to provide necessary things. People from around the world also discovered us through the internet… Here is a message we received: “I was looking for a Latin mass near me and got excited to see this — unfortunately, I am in Limerick, Pennsylvania and (obviously) it’s not the Sacred Heart one mile from my house”.

The second thought I had was a verse of the Gospel: “you now indeed have sorrow; but I will see you again, and your heart shall rejoice; and your joy no man shall take from you” (Gospel of St. John, 16:22). This is the mystery of prayer, the mystery of the Communion of Saints, which is expressed in the verse we pronounce seven times during the Holy Mass, “Dominus vobiscum” (“the Lord be with ye”), even if no one replies.

We know that God always permits temporary struggles for a greater good, which must be for our conversion. One of our joys was to see every day additional flowers being brought to the shrine of Our Lady. She had never received as many flowers during the previous years!

When the doors reopened after three months, I had the same impression as in 2012 when we opened the church for the first time. People were lining up to be first to come and pray in their church again. Several people discovered the Sacred Heart Church through the live-streamed ceremonies, and then came to see the reality and meet our community members in person. We now have to learn how to “get back to normal” step by step, in God’s time, following the current restrictions. People were starving for the sacraments, but thanks be to God spiritual food is once again available.

Virtual followers keep praying with us remotely in real time, additional souls from just around the corner have found a jewel in the heart of their own city and within walking distance of their homes, and…the spiders are gone!