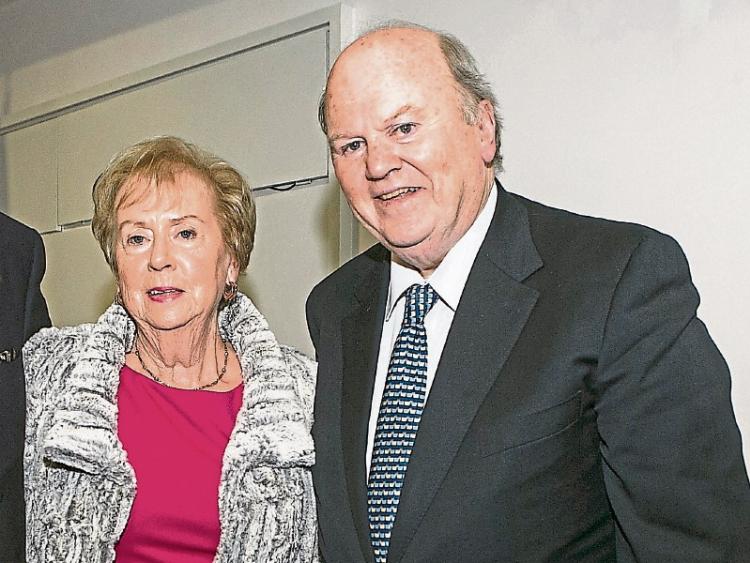 Ms Noonan is pictured above right with her brother, former Minister for Finance Michael Noonan who identified her body

THE SOLE survivor of a “devastating” two-car collision which claimed the lives of three elderly women said she will never forget the impact of the collision.

The three women, Mary Noonan, 78, from Loughill and of Mount Trenchard, Foynes, Mary Costello, 73, from Foynes and Maeve Bradley, 77, from Pallaskenry lost their lives in the two-car collision which occurred on the N69 on the Kerry side of Loughill village on May 30, 2019.

Limerick Coroner’s Court heard  the body of Ms Noonan was identified by her brother, the former Minister for Finance, Michael Noonan.

At the inquests, Inspector Sandra Heelan of Henry Street garda station read a disposition by Mary Griffin from Foynes, the sole survivor of the collision.

Ms Griffin said that at around 6.20am on May 30, 2019 she got into Mary Noonan’s car in Loughill. They headed off for Listowel for Writers' Week. Also in the car was Mary Costello from Foynes.

Ms Griffin said she was not seated in the back seat of the car five minutes when she saw a car come across the road “at tremendous speed”.

“Really, it was like a flash coming straight for us. Mary Noonan was driving. Mary Costello  was in the front passenger seat and I was behind Mary Costello. I had my seat belt on,” Ms Griffin outlined in her deposition.

The impact of the collision she said was “tremendous”.

“Screaming started when we saw the car coming for us. I remember I was down between the seats. I remember I couldn’t breathe. I will never forget the impact,” she said.

Ms Griffin said that after the impact “it’s all a bit of a blur”.

She said she felt the impact was so “horrendous” that the car was coming at “tremendous speed”.

She recalled asking a man “about the two Marys” and being told the roof would have to be taken off to get her out of the car, a Peugeot.

She said she couldn’t remember being taken from the car or being in the air ambulance but remembers being in resuscitation and asking “if the two Marys were dead”.

A nurse who was travelling from Tarbert to Foynes came on the scene of the collision. Her deposition was also read out at the Coroner’s Court. She recognised the occupants of the first car. She said that Mary Noonan was unresponsive, while Mary Griffin was responsive. She assured her that help was on the way. She then went to check Mary Costello but she was unable to open the car door. When she gained access to her she couldn’t find a pulse.

Other people had arrived on the scene and contacted emergency services. The nurse went to the other car and the woman in the driver’s seat was unresponsive.

“I didn’t recognise her. She was the sole person in that car,” she recalled of the driver, Maeve Bradley from Pallaskenry. The emergency services arrived on the scene.

The inquests heard that investigators found no witnesses to the collision. The road where the accident occurred was in good condition and there were no faults found in either vehicle - both Peugeots -  which could have contributed to the collision.

Technical investigations into the collision showed that the Peugeot being driven by Ms Bradley crossed the centre line and the car with the three women in it took some sort of evasive action just prior to the collision by moving left towards the grass verge. There was evidence from her seat belt that Ms Bradley was leaning forward or may have been slumped when the collision occurred.

There was no alcohol or drugs found in either of the drivers’ systems.

Coroner John McNamara said that when three people die in one accident it is “a dreadful tragedy”.

In relation to Mary Bradley, Mr McNamara said that given the evidence in relation to the positioning of her seat belt, she may have had some form of attack other than a heart attack, had fallen asleep at the wheel or had dropped something and leaned forward.

“It’s hard to say exactly. It’s quite clear to me that she didn’t intend to come across the road and collide with another vehicle,” he said.

In the case of Mary Noonan, Mr McNamara said that while she attempted to avoid the collision as much as she could “unfortunately it doesn’t appear there was anything she could do to avoid it”.  He said the appropriate verdict in relation to all three women was accidental death.