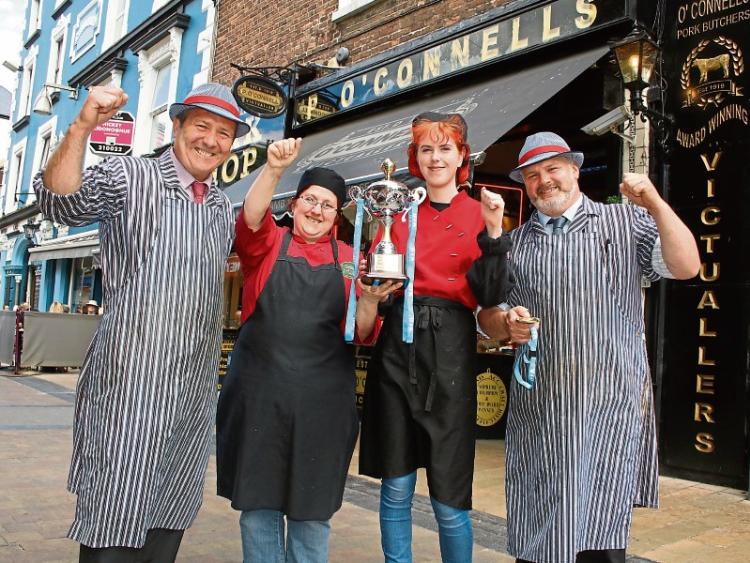 THE introduction of ‘click and collect’ zones in the city centre has left one businessman feeling he can compete with the Crescent Shopping Centre.

Paul Craughan, O’Connell’s Butchers, was speaking after Limerick City and County Council designated three parking spots – one in William Street, two in Roches Street, for motorists coming in to collect items over a 10 minute period.

These will be items they may have ordered on the internet or over the telephone. For Paul, many are telephoning his business in Little Catherine Street with their orders.

He said: “People are calling in their orders. Then they can phone us up when they are outside and we can bring it out to them. For the first time now, we are competing with the Crescent Shopping Centre in that we have the same set up. At last our customers can come to us, pick up their stuff and leave without going into a car park. It’s a win-win.”

“It is good to see this, it is progressive and is the right way forward,” said Brian Mortell, who runs a restaurant and deli in Roches Street, where two areas have been earmarked for the new scheme

“Cars,” he added, “don't bring businesses, pedestrians do and we need more of them.”

The other spot earmarked is in William Street, with more potentially following.

Fine Gael councillor Daniel Butler, who has campaigned for click and collect for a long period has welcomed the move.

He said: “I think this in idea which is worth trying out. It supports local businesses in the city centre to keep them viable, and also as a public health measure because individuals can merely open their boot and have their items dropped in. It would reduce their need to have contact. It will support those who have immuno-diseases or who might be at risk of Covid-19.”

This comes with a number of the other measures under the mobility plan set to go live in the coming days.

“It’s been very positive for us. The last three Saturdays, the city has been just buzzing. It’s a huge success as far as we are concerned,” he explained.

Shane Gleeson, who trades in Spar at the other end of the street, said for the first time as long as he can remember, he had to bring two extra staff in due to the increased footfall.

“​Cars bring customers who purchase things,” he argued, “Customer re-action was excellent and the sense of delight when I confirmed that they didn’t need a disc was palpable. Customers later in the day were very complementary about the city’s cleanliness and the cafe culture. With the relaxed atmosphere on the streets – many had taken the opportunity to eat as well as shop. I saw this myself when I eventually got lunch as I had to wait 10 minutes for a table.”