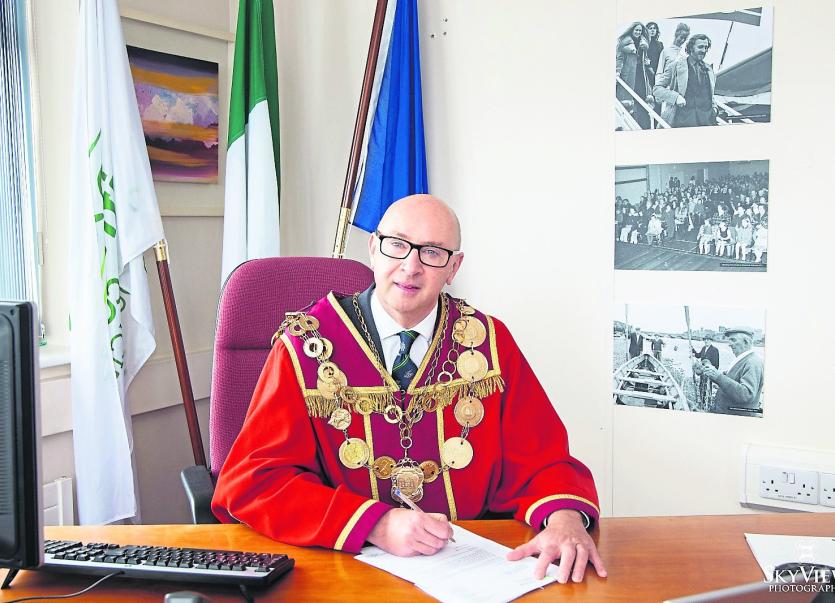 THE new mayor of Limerick has urged people to see the Treaty County as just one area.

Fianna Fail councillor Michael Collins made a bit of local history, with his election being the first ‘first citizen’ to have hailed from Limerick’s county town of Newcastle West.

But while he’s very proud of this, he wants people to know he is the Mayor for all of Limerick, from Corbally out to Abbeyfeale, and Coonagh to Galbally.

“This is my city. People from the county who live out rurally, this is our city. I look at Limerick as a whole. I don’t look at it as Limerick County and Limerick City. It’s just Limerick with the city as our capital and we have our lovely towns and villages, which make up the greater part of Limerick,” he said, sitting in his top-floor office which looks out across the King’s Island, and the northside.

It’s clearly something which is important to the first citizen, as he returns to the subject later on in our interview.

The new mayor has had his taste of the city, living in digs near Moylish College, the forerunner to the Limerick Institute of Technology, as well as an 18-year spell working as an insurance executive in O’Connell Street.

Back then, he played in a trad/rock band, Flaxton, alongside his future wife Fiona, and three other pals, giving gigs at venues throughout the city centre in the early 1990s.

He recalls: “It was very vibrant. There was a great social life at that point. We gigged all over Limerick both county and city. We gigged in the Glory Hole, the Potato Market. We did a gig with Stockton’s Wing. So I knew the city life and music scene quite well.”

Traditional Irish music plays a huge role in the new mayor’s life, proudly reeling off the multitude of instruments he plays.

“Concert flute, banjo, tin whistle, mandolin, guitar. I’m a multi-instrumentalist. My father Sean played music, he played in bands, my mother would have sang and danced. It was part of growing up. My parents would have been founder members of the local Comhaltas branch, so we learnt as we went along.”

Indeed, it was through their mutual love of music that Mayor Collins met his wife Fiona – he was a student at the old boys school in Newcastle West, she at the old girls school.

“We’d have been friendly in secondary school. We’d have had a group of friends, female and male, and we’d have all had musical interests. We ended up joining the Newcastle West folk group, which was part of the church, and we were both in that. Then we both were in the band Flaxton, and that’s where love blossomed,” he smiles.

The pair married in 1997, and have three boys – Darragh, Shane and Micheal.

It was particularly pleasing that at his election – where he donned the famous old robe and chain of office – was a family affair, as five generations of the Collins clan were present at the Limerick Racecourse, including his 90-year-old mother.

These days ‘mayor-making’ ceremonies are calmer affairs than the fraught elections in the city – a grand coalition deal saw to that.

But for Cllr Collins, the old adage still rang true – you never know you have won it until the chain is around your neck.

“The lead up is a bit surreal. You’re still on tenterhooks, not knowing if is it going to happen. Even though we had an agreement with Fine Gael and I got great support from the Independents, you never really know,” he explained.

With a name like Michael Collins, it’s no surprise the new mayor’s family has strong republican roots.

Born in the parish of Kileedy, and now living in Monagea, Cllr Collins speaks fondly of his childhood.

“I’m very proud of my rural roots,” he declares, “I’d have grown up in a very republican household. My grandfather Michael Collins, who I am named after, and my granduncle Tadgh Collins would have been very much part of the War of Independence. They’d have been members of the Irish volunteers in West Limerick. I’ve grown up with that. My father would have been very politically active within Fianna Fail.”

He recalls, from a young age, he would have been in the back of his father’s car to bringing people to vote.

“We had a rural polling booth close to our house, Ballykenny Dispensary. My father was the caretaker of the dispensary. So at election time, they had to prepare it before and clean it afterwards. So I’d spend the whole day at the booth on my bike back and forth watching people coming into vote,” he fondly recalls.

At the age of 18, a young Collins joined the local Fianna Fail cumann in Newcastle West.

Between 1999 and 2004, Newcastle West did not have a party member as councillor Michael Healy lost his seat.

“In 2003, people had said to me, I suppose you’ll be the next Fianna Fail nominee from Newcastle West. I hadn’t thought about it. But as nominations were happening, people kept saying it to me, I was put forward for nomination and I was successful.”

He was elected in 2004, and retained his seat in 2009 (in a tough election for Fianna Fail, with the economy in downturn), as well as in 2014, and last year, when he received the highest personal vote of all the local party’s councillors.

Mayor Collins even managed to squeeze in a general election run earlier this year, securing a respectable 5,150 votes, despite only a 10 day campaign after Cllr Eddie Ryan pulled out.

It has, he believes, left him well-placed for a Dail tilt next time around.

One of the things he puts his success down to is hard work, always being visible and accessible.

“I think a lot of people wouldn’t realise how demanding a councillor’s work is. My phone and social media is always on. I’m effectively available to my constituents all the time. That’s not the case with all councillors, but I’ve always been available. Even when I am out socialising, people still come up and talk to me. I have no issue with that, I enjoy being available to people. It’s what I do,” he added.

Like most politicians now, the mayor has a presence on social media, and in what is becoming more and more common-place, he has been the subject of some quite aggressive criticism at times.

But rather than hit back on social media, Mayor Collins prefers to confront people directly.

“I’ve had issues with friends of mine, people who I know well. I’ve confronted them. I’ve taken it head on myself. If someone is criticising me unfairly, or saying something that is not correct, I take it upon myself to contact them directly. I don’t go on social media, or have arguments on social media. It’s not my style. But I don’t tolerate it if it’s incorrect – and you do see horrendous stuff.”

Away from the political sphere, Mayor Collins is a successful businessman, setting up his family firm in 2005, offering auctioneering services in Newcastle West, steering it through the choppy waters of the recession.

This came after the young man was originally at Moylish College studying electronic instrumentation, before taking the well-worn path to Kostal in Abbeyfeale.

He soon discovered his flair for economics, however, joining Canada Life in the city centre, becoming a qualified financial advisor in that time. He still sits CPD exams every year.

“I was successful in the insurance business. I went to the Million Dollar Round Table twice. This is where the top 10% of financial advisors meet on an annual basis. But you need to achieve at a high level, to become a member of this,” he explained.

Running his own firm was always the dream, though, saying: “Being self-employed is my life, and I wouldn’t work for anybody else now.”

Mayor Collins has started his premiership in strange times with Covid-19 still having a huge impact on society.

So it’s no surprise to hear honouring front-line workers for the incredible sacrifices they’ve made is top of his list of priorities.

“We had the Community Response Group set up through the council. We had sporting organisations, we had the GAA, Munster Rugby and the FAI doing great work. I was part of a response group in Newcastle West myself. We were out there delivering foods and medicines to the most vulnerable people. I want to honour these people, if Covid-19 allows, with a weekend event. We’d like to bring as many people to it, if we can do it safely,” he explained.

As part of his mayoralty, he also wants to visit all the sports clubs which served their communities during lockdown.

There’s plenty going on in the county to keep him occupied too – in his own bailiwick, the Great Southern Trail upgrade is to take place, and he also looks forward to the sod-turning on the Newcastle West athletics hub later this summer.

A proud West Limerick man, Cllr Collins is keen to respect the traditions of the city – that’s why at his election, and at future events since, he’s worn the red robe and chain.

“I want to fuse the old with the new. I want to embrace the traditions of the city into the new Limerick,” he said.

Covid-19 or not, it’s set to be a busy year for Mayor Collins.