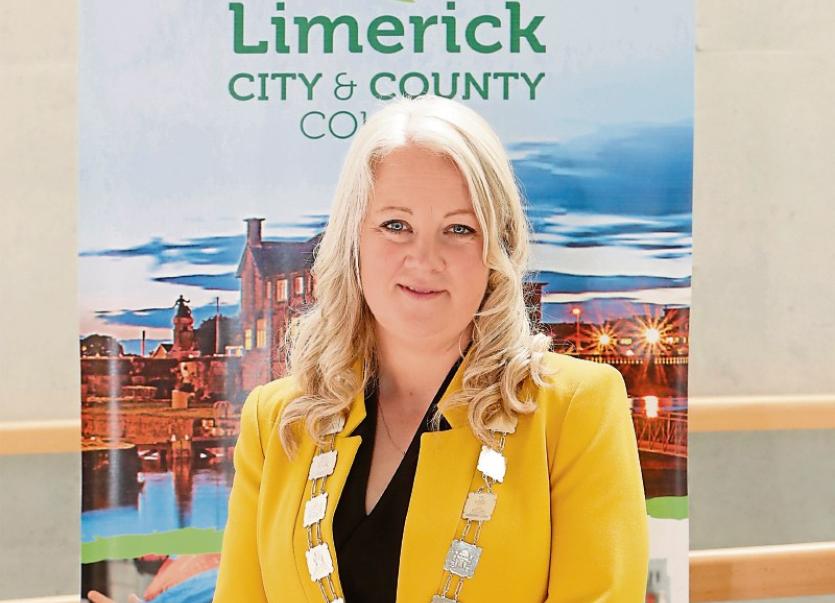 TO say it’s been a busy start to her year in office for the new metropolitan district leader Sarah Kiely would represent an understatement​.

Since the Janesboro mum-of-two took the chain of office mid-way through last month her feet haven’t touched the ground.

She was thrust into the limelight as she attempted to straddle two sides of the debate around council’s mobility plan, which originally envisioned the temporary pedestrianisation of several streets.

It’s certainly not been boring – but then the Fine Gael councillor likes to keep herself active, telling us she’s not had a day off since her election to City East.

Councillor Kiely had suffered the heartbreak of losing her childhood sweetheart Damien to cancer in October 2018.

A long time Fine Gael member, and former secretary of the city constituency branch, the party had approached her to run for election some months after this.

“At the time they asked me to run, honest to God, I didn’t know what day it was. I was still so entrenched in grief. It was very hard to think straight. So I initially said no, I really didn’t want this. ​When you’re in the middle of grief you need something to focus on. When something that upsetting happens, you’ve lost your will to live, I’d lost Damien,” she said.

Amid many calls encouraging her, the most important opinion came from her children Emily, 19, and Tiernan, 15.

Recalling the conversation, she said: “There was a lot of umm-ing and ahh-ing. But eventually Tiernan just said I think it is a good idea, and Emily said, I do too. I asked Tiernan why. And he asked me what’s the other option? You’re going to sit on the couch and cry forever?”

It was her second time running for election, having first sought a seat in 2014. A government backlash, and Fine Gael perhaps overloading the ticket went against her.She said she found it “very damaging” to lose that election, adding: “I was devastated. Every time I spoke about it, I got upset. You regress into your teens and think people don’t like us. But sometimes you just have to suck it up buttercup as my late husband used to say.”​

This time, she was comfortably elected, a move which paved the way for her elevation to the high-profile job of Cathaoirleach in only her second year in politics.

“I’m very much a fan of taking your moment when you can. We don’t know when you’re going to leave this planet. Do your best while you’re here, take the opportunity when it arises,” she said.

A Limerick woman through and through, Cllr Kiely has lived on both sides of the city. A Tusla worker by profession, she actually qualified as a chef – it was at catering college aged 18 she met her husband-to-be Damien.

Indeed, members of Limerick’s metropolitan district will attest to the councillor’s cake-baking skills, and she even broadcast a nightly cookery lesson live on the Internet from her kitchen table during lockdown.

“My mother-and-father when they got married first, they were living across from St Joseph's Church in O’Connell Avenue. Shortly after that, they were offered a council house in Moyross. So we were one of the first families there. We stayed there until I was in my early teens, before they bought a house under the shared-ownership scheme which was being run by the council at that stage. We moved to the Hyde Road and after that, we moved to Janesboro,” she said.

Cllr Kiely has fond memories of spending time on the southside – it was in Janesboro where her grandparents resided.

“I loved going up there on a Sunday. My grandmother Kitty was a great baker, she loved baking apple tarts. I’d go up there on the bus and see her. We’d bake it together, and I’d take it home: in the winter, it’d keep your hands warm when you were on the bus,” she smiled.

Politics was always a talking-point in the Kiely household. But it was when she was working as a teenager for former mayor Ger Fahy in the Spotted Dog pub where she really got the bug.

One thing Cllr Kiely hopes to do in her year in office is to stick up for the underdog. She finds the discrimination young mothers in particular face "quite sad.”

“I had Emily when I was quite young. At the time, I know people were saying Oh my God, she’s only 21 and she’s having a baby. I think it’s quite sad when you see a young mother, and people look down on them. It’s something that stuck with me forever. I felt whatever people think of me doesn’t really matter, it’s what I think of myself. It’s something I’d like to get out to people – don’t let them in,” she said, “We are built to have children when we are young. We shouldn’t look down on young mothers. God knows we know people who’ve had cancer or are suffering .Any new life should be embraced.”

Many councillors do not like the nitty gritty work local representatives must do – housing applications, getting potholes filled and the like.

But the reward, Cllr Kiely says is there, when you see you’ve really been able to help someone.

”The satisfaction that you get, you can’t buy that feeling. There is lots of stuff we do you can’t talk about – not the stuff you put on social media. It’s what you do quietly in the background. A lot of people come to you and they are in a lot of distress, they’ve had a rough time, and empathy is very important. It can be emotional when you see people in distress and in situations you wouldn’t want to be in yourself. You just try and do your best for them,” she said.

Doing her best is something Cllr Kiely intends to do during her year as its first citizen.