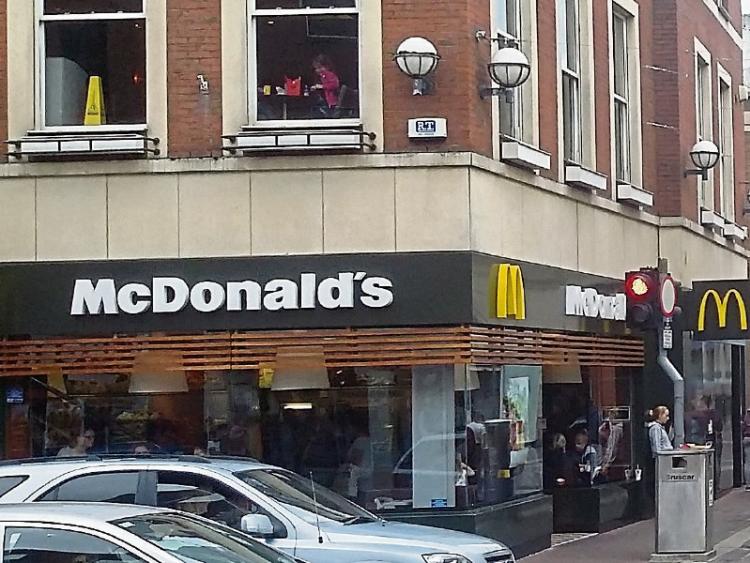 CUSTOMERS and staff at a fast-food restaurant in the city centre were forced to retreat behind the counter after a violent brawl broke out inside the premises, a court has heard.

Two young men and a woman have pleaded guilty to a variety of charges relating to the incident which happened at McDonalds, Cruises on June 20, 2016.

A bus driver sustained serious injuries when he was assaulted during the brawl while his daughter was struck several times with a mop handle.

During a sentencing hearing, Garda Aled Harkin told Limerick Circuit Court a dispute over a €20 debt sparked the brawl and ensuing violence.

The defendants Sarah O'Donnell, 31, of Lenihan Avenue, Prospect; James Kelly, 33, of no fixed abode and Desmond Hughes, 27, who has an address at McGarry House, Alphonsus Street.

During the altercation, which was captured on CCTV, a young woman was knocked to the ground and chased up the stairs to an overflow seating area.

The woman later told gardai she had been approached about the €20 debt and was not allowed back to the restaurant unless she paid.

Garda Harkin told John O’Sullivan BL, prosecuting, that having been phoned by his daughter the woman’s father travelled to McDonalds and tried “to sort out the issue”.

However when he intervened he was attacked by James Kelly who struck him in the nose and mouth.

He was struck again after he was knocked to the ground and the assault continued outside the main door of the restaurant.

Judge Tom O’Donnell was told Mr Hughes also struck the bus driver.  Ms O’Donnell, he added, can be seen on CCTV chasing his daughter while “violently swinging” a mop handle.

Mr O’Sullivan said Ms O’Donnell can also been seen on the footage pulling her hair and kicking her in the head.

A medical report which was prepared for the court stated the 66-year-old bus driver sustained a fracture to his cheek bone, bruising and a laceration over his right eye. He also sustained soft tissue damage to his right knee.

In a victim impact statement, he said he thought he was going to die and that he now avoids going into the city centre as much as possible as he no longer feels safe.

While his daughter also sustained injuries, they were not serious and she did not require treatment in hospital.

Garda Harkin said the three defendants were identified from the CCTV footage and that all three made some admissions when questioned by gardai.

Barrister Yvonne Quinn said her client – Desmond Hughes – has suffered from addiction problems for some time and she submitted that he is a vulnerable individual who is easily led.

“He accepts he should not have involved himself,” she said.

Andrew Sexton SC, representing James Kelly, submitted what happened was “not  a planned incident” and had occurred spontaneously.

”There was no great plan, it just escalated out of control,” he said asking the court to note that his client had returned a mobile phone which was taken from the bus driver during the incident.

Barrister Brian McInerney said it was difficult to argue that his client should not be jailed given her previous criminal record.

However, he asked the court to note that Ms O’Donnell has addressed her addiction issues and has not committed any offence since May 2017.

”She has made major strides,” he said submitting it would not be in the interests of justice to sent her to prison.

Judge O’Donnell has indicated he will impose sentence later this month. Adjourning the case he said there was “a lot to consider”.