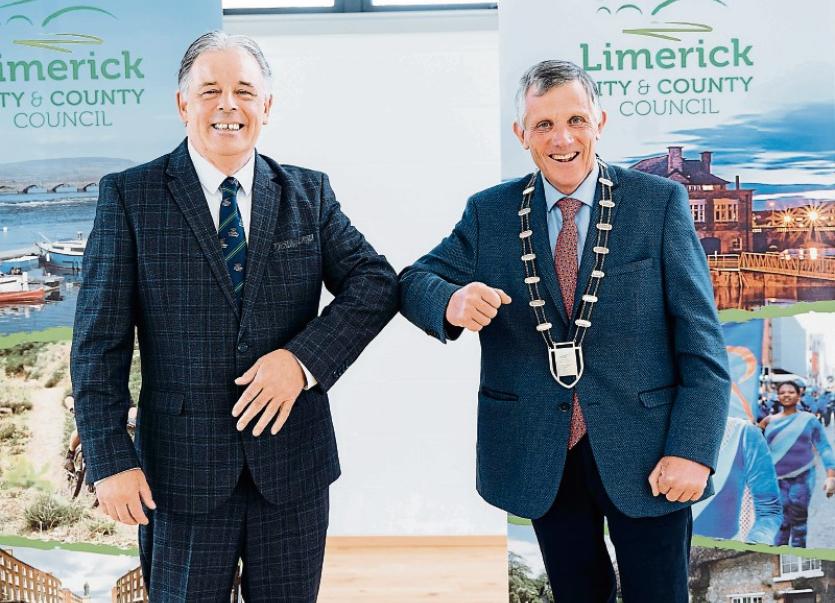 JOHN Egan has had some dark days – being diagnosed with and battling throat cancer – and before that, narrowly losing his council seat in 2014.

That is what made last Tuesday in the new socially distanced venue of the hall in Coláiste Iósaef, Kilmallock, all the sweeter.

The Murroe man put on the chain and was declared the new cathaoirleach of the Cappamore-Kilmallock municipal district.

“I’m very proud to be elected. It is a great honour. Cllr Mike Donegan (outgoing cathaoirleach) conducted the meetings very fairly; got the best out of councillors and got decisions made. I will continue that and work closely with the council staff. We have a great team,” said Cllr Egan.

He said he doesn’t want to hear the word “no”.

“We have to find solutions,” said Cllr Egan, who gave a great analogy about a cow falling into a slurry pit. He said you could spend all day giving out about who left the gate open but the cow will die. “You get the cow out and you move on,” said Cllr Egan.

Some of the things he would like to see under his tenure is the commencement of social housing being built in the district.

“I want shelters at bus stops in our towns and villages. We are all going ‘green’ and being urged to use public transport but if you wait at a bus stop you will get drowned,” said Cllr Egan.

Another concern he raised is planning regulations in rural areas and the difficulty in getting permission to build a new house.

He said in some cases this is necessitated by a marriage or couple breaking up when a person is “going through enough trauma”. Cllr Egan also highlighted the incredible work local committees do to keep our towns and villages tidy.

Cllr Ger Mitchell was elected as leas cathaoirleach and commended Cllr Donegan on his time. He said they never bring politics into it and they work for the betterment of everyone. Cllr Mitchell congratulated Cllr Egan as did Cllrs Martin Ryan, Eddie Ryan, PJ Carey, Brigid Teefy and Mike Donegan.

As outgoing cathaoirleach, Cllr Donegan wished to acknowledge the great work done by all the frontline staff across all sectors.

“Since the outbreak of the coronavirus pandemic there has been a theme that ‘we’re all in this together’. And I hope that, we as a local authority, can do something in the future to acknowledge the work that they are doing, and have done for us during this pandemic,” said Cllr Donegan, who also thanked the staff, both indoor and outdoor, for their help and support over the last 12 months, especially during Covid.

Cllr Donegan spoke of many highlights in his year. He said one of his main goals as cathaoirleach was to ensure the council develop and promote Kilmallock Business Park, purchased from Shannon Properties.

“There are ambitious plans by the Fire Services to develop a regional and national training centre at the rear of the park. Also there are companies enquiring about relocating to the business park and one company, Irema, has purchased a unit adjacent to their existing factory for expansion. I would like to thank the council for their continued support and commitment to economic development in our municipal district. We have ambitious plans for the business park,” said Cllr Donegan.