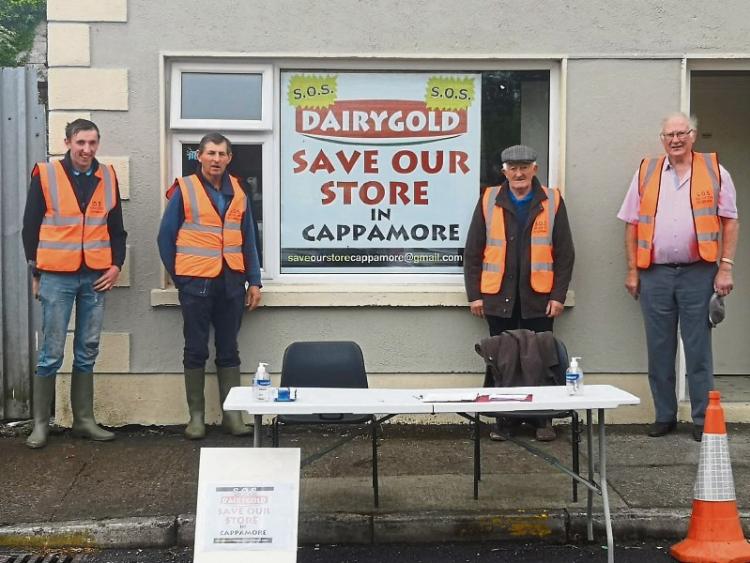 CAPPAMORE farmer Padraig Ryan says there is “no justification” for Dairygold closing its co-op store in the village – and over 2,000 agree with him.

An action group has been set up called Save our Store. Mr Ryan, who is a member, said they have been “overwhelmed” by the support from both the farming and non-farming community.

“It has been phenomenal. We are proud to have a Dairygold store in our village and are adamant of the necessity to retain the brand in the area. There is huge potential for the future.

“We all remember the trucks bringing hay into the village, organised by Dairygold, during the fodder crises. And there has been exceptional work done under Covid-19 lockdown.

“We set up a petition table across from the store for people to sign. They can also sign it in the local Centra and online. To date we have over 2,000 signatures. It reflects the strength of feeling in the area,” said Mr Ryan, who also praised the staff working there.

An extensive presentation has been delivered to Dairygold.

“There is no justification for closing it. Sales in the store are up 17% – the second highest in the Limerick/Clare region, while other stores earmarked for closure are in negative figures,” said Mr Ryan.

The dairy farmer continued: “We are not accepting their decision to close our local store. It's a serious error of judgement.

“A public meeting has been organised for Tuesday, July 7 at 8.30pm in the community centre in Cappamore to consider our next course of action should Dairygold not respond positively in the meantime.”

Mr Ryan concluded by saying, “We are confident that Dairygold will revisit this situation and on reflection do what is the sensible thing to do and leave the co-op store in Cappamore open for business.”

It is due to close in September.

In a statement sent to the Limerick Leader, a Dairygold spokesperson said they acknowledge the concerns expressed in the Cappamore community about the planned closure of the co-op store in the village.

They said the closure is only one element of a much wider Dairygold store investment and integration plan approved by the Dairygold board back in autumn 2017 and “cannot be reversed”.

“Unfortunately, with changing times and trading patterns, it is no longer viable for Dairygold to continue trading through the Cappamore co-op store and it will be integrated into the neighbouring store in Old Pallas.

“We acknowledge and understand the disappointment within the Cappamore community regarding the store closure, but you can be assured that the decision was carefully considered and not taken lightly. It cannot be unwound or reversed,” said the spokesperson.