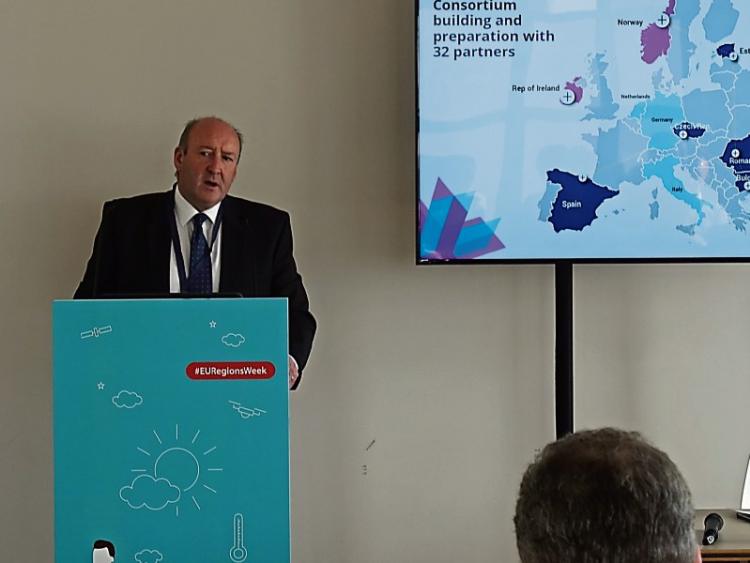 IN the second part of a two-part interview, the chief executive of Limerick City and County Council has revealed that planning is “well underway” for the Ryder Cup in 2026 “and we as a local authority have a full team on it to make it the best Ryder Cup experience to date”.

Dr Pat Daly, who was appointed to the role of chief executive in 2019, says the event at Adare Manor “will be a game changer for Limerick especially in terms of tourism and sport”.

In a wide-ranging 20-question interview - the final nine of which are published below - Mr Daly discusses a Limerick city and county post Covid-19 and what his ambitions are for the region.

A native of Greystones on the Ennis Road, Mr Daly was a student of Ardscoil Rís.

He has worked with Limerick City and County Council for the last seven years.

Mr Daly held the positions of head of innovation, the director of economic development and planning, and deputy chief executive before being appointed the chief executive of the local authority in August 2019.

He will continue in the role “until we come to a conclusion of the directly elected mayor process”.

Mr Daly resides in Annacotty with his wife Mary.

County towns are slowly coming back to life following the lifting of restrictions, but with less footfall than in the city centre and social distancing measures to be adhered to, many businesses will find it next to impossible to make ends meet. Are there any plans in place to assist these businesses in the county?

As part of our new plan to re-imagine Limerick, we are also looking at our county towns. As market towns, they are actually quite large, they have quite a big footprint so we’re confident that they can be managed well. We’re looking at animation programmes and supports, what applies in the city applies in the county as well. And indeed along with our own schemes, there is good supports from companies and businesses in the county towns.

Are there any exciting projects or plans for our big county towns like Abbeyfeale, Newcastle West and Kilmallock?

I’m quite excited about plans for the Great Southern Greenway which links the three market towns of Rathkeale, Newcastle West and Abbeyfeale and the recently announced €5 million investment in the route will greatly enhance the Greenway making it more attractive to visitors and therefore boosting commerce in these three key towns. We are working closely with our colleagues in Kerry to ensure that the extension to Listowel also opens up further new business. Other destinations along the Greenway will also benefit including Ardagh and Barnagh where the Council have purchased the old station houses at those locations and renovation works are planned in 2020.

The traffic management plan for Abbeyfeale is advancing and this will include the construction of a new off street car park which will be of benefit to the town. Innovate Limerick are also working in partnership with the local community to develop an ENGINE eHub in the town.

There are a large number of community projects happening throughout the county including those supported by LEADER programme, Town & Village Renewal Scheme, CLAR Programme, Outdoor Recreation Infrastructure Scheme (ORIS). Other examples where the Council is working with the local community are in Glin in developing a Knights of Glin visitor centre and developing a public realm plan for Dromcollogher.

The intention is to develop a Regional Fire Centre at Kilmallock Business Park which was recently purchased by the Council, which will be a great boost for Kilmallock. The Council will also work to support companies in the Business Park, as well as in the town of Kilmallock, in the post Covid era. Funding is also in place for the development of the Stone Mansion project in Kilmallock, as well as the provision of a new sensory garden to complement the recent opening of the new West Wall Walkway in Kilmallock.

The Council is also planning to carry out improvement works at the Lough Gur amenity area in 2020 so there’s a lot happening!

Many are hoping that staycations or home holidays will save the Irish summer for retailers, is there enough being done to market Limerick on the national stage and do we have a product now to attract people to visit here once the pandemic has passed?

We had a hugely successful launch of Brand Limerick this year with a significant investment by the Council to get people talking about Limerick. The creation of the Limerick brand is a major statement of our ambition here, showing that we are fully confident about our proposition, our offering and our ability to compete in the international marketplace. We created a brand that would turn heads and let us be part of the conversation, wherever the opportunity arises, be it at home or abroad. We launched an extensive local, national and international advertising campaign featuring radio, print and digital to really put Limerick up in lights. It has been very exciting to see the ways in which different stakeholders from right across the community have adopted it and embraced it and although we have been curtailed slightly by the Covid-19 crisis, I know our marketing team is looking forward to launching a new domestic tourism campaign to encourage people to holiday and explore many different experiences in Limerick this Summer at the end of this month. And it’s confident and engaging, so watch this space!

Following Aer Lingus’ decision to furlough its cabin crew staff at Shannon Airport due to the Covid-19 crisis – but keep workers on at Cork and Dublin Airports – there are growing fears that its operation may be reduced permanently which would be a huge blow for the region. Do you think enough is being done to keep the airport viable?

The three local authorities in the Mid-West, Limerick, Clare and Tipperary are working closely on this issue, we would have a very good rapport together particularly with regard to Shannon Airport and its future. We’re hugely aware of the importance of the airport and we are very supportive of any projects and support that they need to keep open. The three chief executives are in constant contact with the management of the airport.

Amid speculation of huge cuts in spending earmarked for capital projects, is everything going according to plan in relation to the proposed €450m road network plan for Foynes Port, including a bypass at Adare?

Planning for the Foynes to Limerick Road including the Adare Bypass is proceeding. Limerick City and County Council applied to An Bord Pleanála for approval of this major project last December. We expect An Bord Pleanála to arrange an oral hearing into the application, however we have not received notification of any date yet. This project is vital for the development of the Port of Foynes, County Limerick and the Mid-West Region and in order to relieve congestion on the N21 national route through the village of Adare.

Is there anything new to report on the proposed M20 between Limerick and Cork, estimated to cost up to €1 billion?

Well the planning and design for the Cork to Limerick project is progressing well with the road-based and rail-based options being developed by the project team. Environmental surveys will begin this summer, followed by site investigations within the recently published study area. Public consultation for the short-listed options is scheduled for later this year and that will be a key milestone for this project of national importance.

Our plans are city and county based, we are very conscious and proud that we’re a City and County Council. You need a strong city to have a strong county and vice-versa. And I believe that’s what we’ve achieved under the Limerick 2030 Economic and Spatial Plan with actually many of the larger projects for Limerick based in the county area.

How important do you think the hosting of the Ryder Cup in Adare will be for Limerick and the region?

It will probably be the biggest opportunity that Limerick has ever had to showcase itself nationally and internationally. It will be a game changer for Limerick especially in terms of tourism and sport. Planning is well underway and we as a local authority have a full team on it to make it the best Ryder Cup experience to date. And we’re confident that it will be!

Finally, what do you hope your legacy as chief executive will be?

I hope to leave Limerick in a better place than when I began and build on the superb work already that has been done under the Economic and Spatial plan.