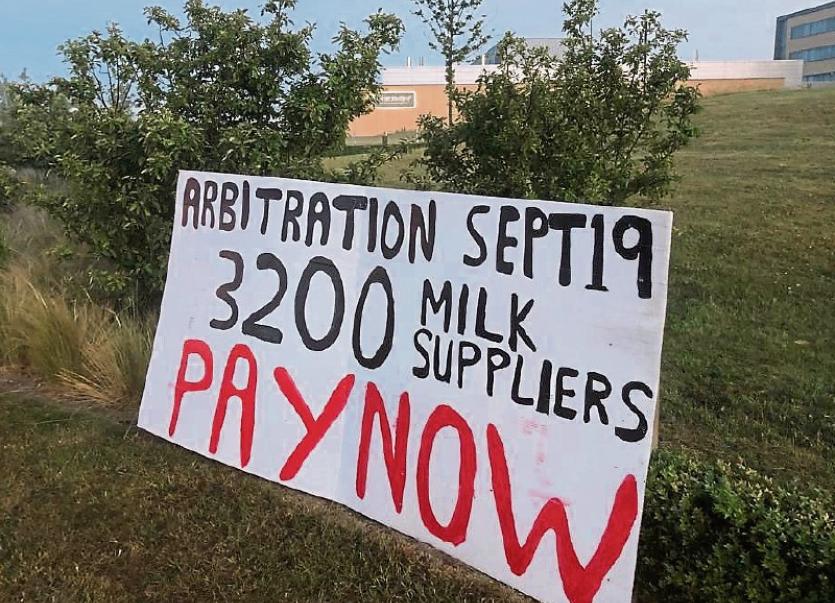 A GROUP of disgruntled Kerry suppliers held a protest with no people outside the Kerry Global Centre in Naas on Monday morning.

The row centres over Kerry Group’s previous commitment to pay a “leading milk price” on a “like-for-like basis” that is in line with prices offered by other processors. It follows the conclusion on the arbitration process in early September which ruled in favour of milk suppliers.

In a statement to Farm Leader by those behind the protest, they said they are “just a group of very frustrated farmers being taken for granted by the corporate world where the bottom line or profit overrides the contract with the primary producer i.e. the milk supplier in this case”.

“Covid or no Covid we are owed money since 2015. Kerry Group’s commitment on the leading milk price on February 22, 2020 has already been broken in March and April which proves categorically that Kerry Group management is not serious about bringing these negotiations to a conclusion,” they said in a statement.

It reads: “Kerry's heritage lies in dairy production and although we have evolved beyond our origins in milk processing, we retain strong links with the farming community from which we have grown. Each year we collect and process over a billion litres of milk from small family farms in South West Ireland and turn this into the highest quality dairy ingredients. Through Kerry Agribusiness we work closely with our dedicated group of over 3,000 farmers to help ensure the sustainability of this important raw material.”

Mr McCarthy said: “Kerry Group utter the above rhetoric paying lip service to milk suppliers and at the same time refuse to honour the leading milk price as ruled by arbitration gives farmers no confidence in any venture with the co-op. This chapter with the PLC has run its course and the time has come to pay up.”

Farm Leader contacted Kerry Group. A spokesperson confirmed that discussions between Kerry Group and Kerry Co-op are ongoing with a view to securing agreement in relation to future milk price arrangements.

“While good progress continues to be made in these discussions unfortunately the time frame for discussions had to be extended due to the Covid situation,” said the spokesperson.

Last December, Kerry Group agreed to make a goodwill payment of 3c/l to be paid from mid-January 2020.

The company stated: “It will be calculated based on the average annual milk supplied for years 2015 through 2019 and includes any additional payment arising from the milk supply contract in 2019.