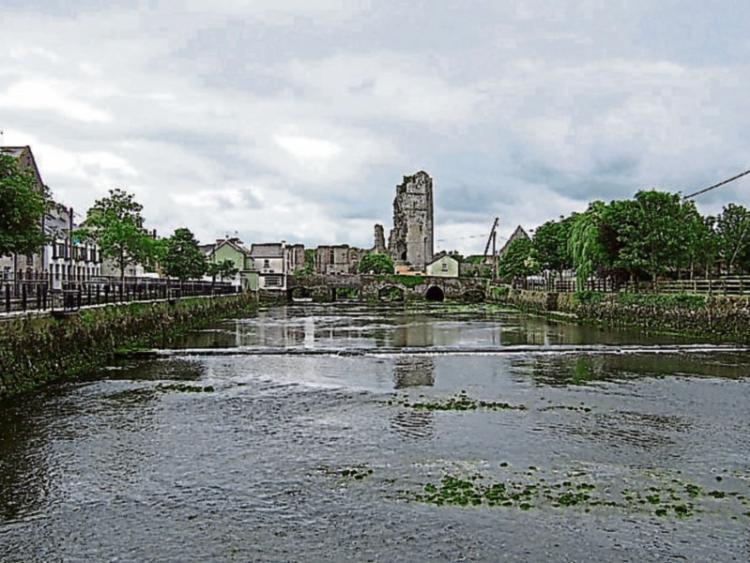 THE RIVER Deel was in the news recently not for its beautiful features, but as a place for dumping dead donkeys and horse manure.

The rivers of our country are great dumping grounds due to thoughtless individuals who have no regard for nature and our beautiful countryside. A river still touches our imaging as it has done for centuries, for as Robert Louis Stevenson reminds us it has long been the place of wishes and dreams:

"I will make my kitchen and you shall keep your room,

Where white flows the river, and bright blows the broom."

In these lines from "Songs of Travel", he associates the river with an idyllic way of life, that is lived in close harmony with nature.

The River Deel rises southwest of Dromina in north Cork, where it then flows into county Limerick. It meanders along through west Limerick for 39 miles before emptying into the Shannon estuary. Along its route to meet the River Shannon it flows through the villages of Milford, and Castlemahon. It skirts past Newcastle West, and then it continues through the towns of Rathkeale, and Askeaton. The Deel derives its name from "daol", an Irish word for beetle, insect, or worm because of its winding , bending shape, and it has numerous tributaries.

After leaving its source the first village of any significance which the river Deel flows through is Milford on the Cork-Limerick border. While the river in the village is spanned by a road bridge, this was not always the case. In Irish the village is known as Áth an Mhuilinn-"The Ford of the Mill "a throw back to when there was no bridge at this location.

In 1848 a corn mill was built in the village and this resulted in improvements to the river and associated mill races. The Milford Drainage Board was formed in the mid-1880s and they spent around £5,000 lowering and widening the river. The mill building has been used as a store and was also one of the first creameries in Ireland.

The Deel flows through the village of (Mahoonagh olden name) Castlemahon, before turning sharply to the right. The ruins of Mahoonagh Castle, which was built by the Fitzgerald's at the end of the 12th or the beginning of the 13th century, can be seen on the northern riverbank. The bridge over the river in the village built in 1761 by Owen McCarthy was described by Samuel Lewis in 1837 as "a good stone bridge."

It takes in The Glashnakirka Stream, Ehernagh Stream, and the Arra River, that flows through Newcastle West, and the Arra River, and the Ballyfrawley Stream. Between Coolanoran and Reens it is joined by the Slewnaun stream, which rises around Kerrikyle not far from my own house.

The river flows through the town of Rathkeale which has a significant traveller population, and the largest concentration of descendants of the German Palatines who immigrated to Ireland in the early 18th century. The main bridge in the town is known as the "Deel Bridge." This humpback five-arch-bridge was built in 1747 and is over 7m wide. This bridge replaced an earlier bridge which was just 4.7mwide and which had fallen into a dilapidated and dangerous condition.

Another important bridge in the town is a two-span former Railway bridge which was constructed in 1867, as part of the Rathkeale to Newcastle West line. It no longer carries trains but remains an important local right-of-way route over the river Deel. On the south western edge of Rathkeale, and on the southern bank of the Deel can be found Castle Matrix. This was once owned by Thomas Southwell who rescued 200 Palentine families from Germany and settled them in the grounds of the castle in 1709. Sir Walter Raleigh met the poet Edmund Spenser at the Castle.

By the 1960s, the castle had fallen into disrepair, and American Sean O'Driscoll bought the castle and restored it to its former glory. The castle had a vast library that contained a collection of original documents relating to the Wild Geese. The writer Sean O'Faolain wrote a lot about the birthplace of his mother beside the river Deel. The river turns north and just south of Newbridge the Kissaghatrodaun Steam joins it.

The last stop on the river Deel is the town of Askeaton, and over the years the river has had a major influence on the town. Located on an island in the river in the middle of the town is Askeaton Castle, which was founded around 1199, and most likely by William de Burgo. The tower which can be seen at present, dates to the 15th century, but it replaced a much older tower. The castle was also the location of one of the finest Banqueting Halls in the country. It was 72 feet long by 30 feet wide and was built by James Fitzgerald, 6th Earl of Desmond around 1440-1459. The castle was abandoned by 1652.

Beside the island is Askeaton Bridge, a five-arch road bridge built around 1700, and there is evidence of medieval fabric in its construction. Other impressive remains on the east bank of the river Deel is the Franciscan Friary. This was founded by the 4th Earl of Desmond around 1400. It includes, with magnificent cloisters with 12 arches on each side, a beautiful east window, mediaeval carvings, and a chapter room that is the final resting place of the martyrs Bishop Patrick O'Healy and Fr Conn O'Rourke. The friars were attacked several times and the friary permanently closed in 1740.