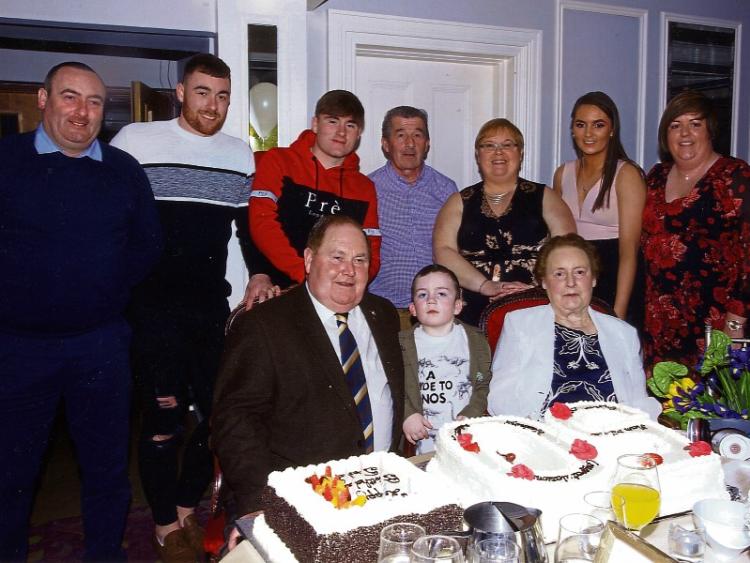 LIFE is full of coincidences – one innocuous decision can be life-changing.

If John and Kathleen McCarthy had got married later in March of 1970 there would have been no massive 50th wedding anniversary party in the Woodlands House Hotel. But on March 6 they celebrated with over 250 friends and family.

A few days later the hotel and all others were closed. They reopen on June 29 and the Woodlands is currently offering a takeaway service.

But John, from Kilteely, and Kathleen, Adare, even meeting in 1965 was by chance. John had never been to the Oyster Ballroom before but on Wednesday night in July 1965, he decided to see what all the fuss was about. Known as the ballroom of romance, it certainly was for John and Kathleen.

“I finished work early and said to myself ‘I think I will hit for Dromkeen’. It was the Star Ballroom in Cappamore on Sunday nights I used to go to. I never thought I would meet my wife that night in the Oyster Ballroom. I can remember the date – July 7, 1965 – and I can remember the band,” said John, who was 19 at the time.

After arriving in his span new Ford Anglia, John went in, saw this beautiful young lady (Kathleen Noonan) across the dancefloor and it was “love at first sight”.

“In those days the women stood in one row and the men stood at the other side of the ballroom. She caught my eye and I suppose I caught hers too,” laughed John.

“A dance would be announced and you would bow your head at a girl and she would bow her head and come out and meet you. I bowed my head and she came on the floor to me. It was love at first sight and we were together ever after,” added John.

He asked her to a dance in Sixmilebridge and the rest as they say is history.

They got engaged in March 1967 and they married on March 5, 1970 in Kilcornan Church. The date happened to be John’s birthday. Little did they know that the date they picked in early March would have big consequences half a century later.

Beloved children Sean and Anita were born and John and Kathleen have four grandchildren –  Jamie, Evan, Shannon and Charlie.

“Kathleen is a wonderful wife and mother. We have had a very enjoyable 50 years. We have had a wonderful time and made a lot of friends all over the country,” said John, who is very well known as he worked for the council for 38 years as an area supervisor and is now co-ordinator of award-winning Kilteely Tidy Towns.

As the clock ticked closer to their 50th wedding anniversary they decided to have a party on Friday, March 6 in the Woodlands – almost exactly 50 years to the day since they walked down the aisle.

“It was a once in a lifetime opportunity. We had over 250 friends and relations. They travelled from many counties in Ireland and over from England.

“A week later the whole country was closed down. I’d say we were about the last big party. We’ve been getting lots of phone calls from people saying they had a lovely night and they hadn’t a night out since,” smiled John. After a meal and Mass celebrated by Fr Conor Hayes, musician Paddy O’Brien took the stage and reminded John and Kathleen of their ballroom days.