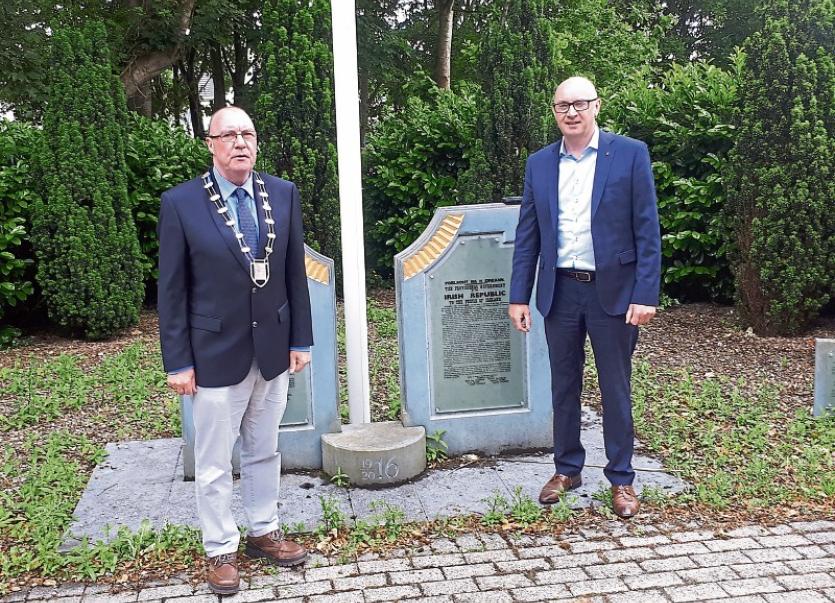 THE newly elected cathaoirleach of the Newcastle West Municipal District used his maiden speech to encourage people “to come out and support our local shops” as businesses open up following the lockdown.

Councillor Francis Foley, FF, was speaking at the first physical meeting of the district since the lockdown. He was proposed by party colleague Cllr Michael Collins and seconded by Cllr Liam Galvin, FG, who, like Cllr Foley, lives in Abbeyfeale.

“It’s important that we get these people back trading again,” said Cllr Foley, after donning the sterilized chains of office.

“I also feel that businesses at this stage should be getting an injection of State funding to help them recover. I spoke to a business person last night who is just back after the lockdown. They are nervous. They are frightened. And they need a bit of help so a little bit of funding to get them up and trading again is very, very important.”

Cllr Foley said that the Abbeyfeale Traffic Management Plan is something he “would like to see happen within the next 12 months, and a public toilet for Abbeyfeale”.

He said an issue which is very important for both Newcastle West and Abbeyfeale is a distributor road.

“We have made a start on that, money has been allocated towards it, it’s progressing and I think it’s important for both towns that we get a route as soon as possible.”

He said The Greenway is an “exciting project that has developed into something great for the Newcastle West and Rathkeale areas”.

Cllr Foley thanked outgoing cathaoirleach Cllr Jerome Scanlan for the work he has done over the last 12 months.

Cllr Michael Collins who was elected leas-cathaoirleach said: “I hope to support Cllr Foley as best I can.

“Cllr Foley is very experienced. He has been around since 2004. He is very dependable. He is fair and he is honest,” he said.

The pair came forward for a photograph. An elbow nudge was suggested instead of the traditional handshake.

Tributes were also paid by both councillors and council staff to Cllr Scanlan for his work and dedication during the past year.

Cllr Scanlan thanked the officials for their help over the past 12 months and particularly over the past three months which he called “very challenging, restrictive times.”

He thanked all the councillors for their cooperation over the year.

Gordon Daly, director of community development  paid tribute to Cllr Scanlan for all his “work, courtesy and encouragement over the past year”.