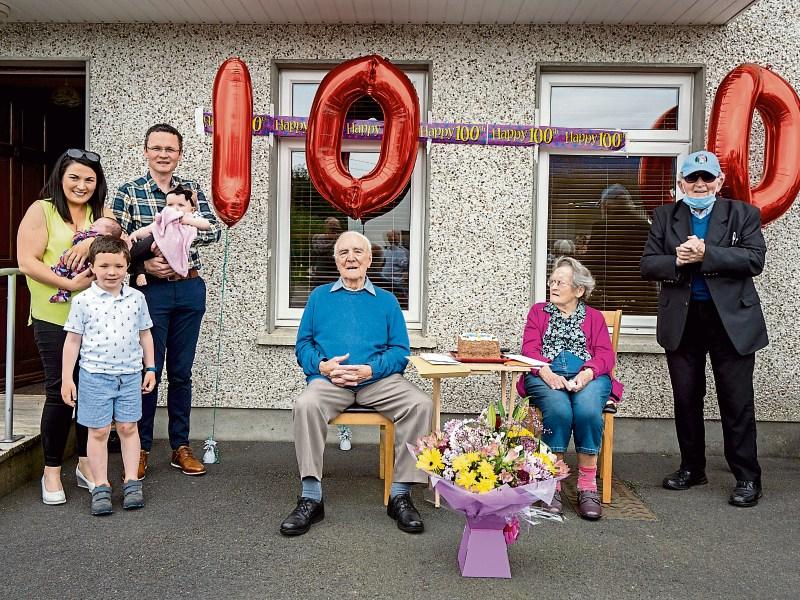 ON THE morning of his 100th birthday Sean O’Connell’s was out at 7am sweeping the yard for a socially distanced gathering.

The Newcastle West man is as fit as a fiddle - he was only ever in hospital for two hip replacements. And still drives a car and shows no signs of stopping.

What is the secret to a long healthy life, the Leader asks.

“That’s one I couldn't tell you - just keep going,” laughed Sean, who was off to do a bit of shopping after the interview ended.

Hard work could be one of the keys. Sean started working with his father John in the family harness making business on Maiden Street at the age of 16.

“My mam passed away that November. It was her wish that I would go into the business with my father,” recalled Sean. That was his life for the next 45 odd years.

Practically every pupil in Newcastle West had a school bag made by Sean. O’Connell’s sliothars too were pucked across west Limerick.

“They were all made behind the counter in Maiden Street,” he said. When Sean saw that business was diminishing he changed career at the ripe old age of 62 and went to work at Aughinish Alumina.

Sean was as good at making sliothars as he was at hitting them. He won a county minor medal with Newcastle West in 1937.

“I played half forward. I gave it up then because I needed my hands to work,” said Sean. Hurling, as well as harness making, is in the blood. His brother and Christian Brother, Patrick O’Connell was “a legend of Post Primary Schools hurling”. Sadly, he passed away in late March but was very much looking forward to celebrating Sean’s 100th.

A big party was planned but Covid-19 took care of that. Up to 30 were travelling from America.

“Maybe later in the year we might have a party,” said Sean.

But his relatives and neighbours didn’t let the day go unmarked as they came to wish him a happy birthday. Sean had the yard swept at 7am that morning so it was in “good nick”. They chatted and reminisced and celebrated a wonderful man who has stopped the clock of time.

“When I first got the pension everyone told me I shouldn’t have got it at all - that I wasn’t that age,” laughed Sean.

He gave up drink as a young man and cigarettes before he married his beloved wife, Chris who is still hale and hearty.

“I am very fit thank God. I’ve had great health. The only time I was in hospital was when I got the two hips replaced. I am still driving, no problem at all,” said Sean.

One of his many relations is nephew, Minister Patrick O’Donovan.

“As a family, we are just so proud of him that he has managed to make this milestone and to do so with such good health. Sean is a remarkable man. His memory is unreal on top of his extremely good health.

“He is hugely respected. Even after retiring he would be well known in the town as he walks the street every day, he went to the Demesne most days before lockdown and he drove Chris to Mass. The two of them have had a very nice life. Chris used to work on the street as well in Phelan’s hardware shop,” said Minister O’Donovan.

Covid-19 lockdown has been no great hardship for his uncle, he said.

“Sean has seen the worst of times in Ireland. He has lived through TB, the 50s and things like that growing up. This is nothing new to him in terms of hardship. He just has a fantastic outlook on life.  “I think it is just unbelievable that Sean was born prior to the War of Independence. He has lived through every government of Ireland. He was 19 when the second World War broke out. It is remarkable,” said Minister O’Donovan.