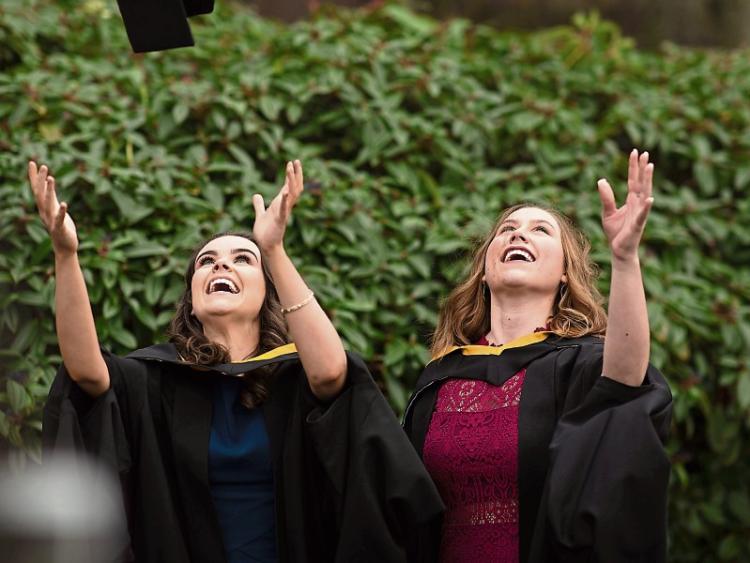 Scenes like this won't be played out in the University of Limerick for the August graduations as due to Covid-19, students from the Class of 2020 will be conferred in absentia. Pictured during happier

THE UNIVERSITY of Limerick has defended its decision to cancel conferring ceremonies as originally planned for August “in light of the public health directives issued by the government” in relation to Covid-19.

In a letter sent to this paper, which features on page 14, student Sarah McBrien from Castletroy criticises the manner in which the news was relayed to students of the Class of 2020.

“UL Vice President Kerstin Mey waited to inform the graduating class until after 4pm on a Friday, before a bank holiday, that UL are cancelling commencement ceremonies previously scheduled for August, graduating students in absentia,” wrote Sarah who spent the last four years studying for a BA in English, New Media and Cultural Studies.

“The announcement comes at a frankly thoughtless time when the country is just beginning to re-open and over a month before our results will even be ready for release. Significantly, previous correspondence from earlier in the year informed graduates that their specific time slot during the commencement period would not be released until July, following the issuing of results. This further demonstrating how UL made seemingly no effort to even consider how commencement ceremonies might operate due to the Covid-19 pandemic.”

Ms McBrien goes on to express her disappointment that the letter informed students that in lieu of a ceremony, UL “will host online events to celebrate and honour the graduation of the Class of 2020”.

“We are very disappointed that we will not be able to have these celebrations – but we have to recognise that we are living in a pandemic, the health and safety of our community of staff and students has to be our overriding concern and that is reflective on how we confer people with their degrees.”

The spokesperson said that the Academic Planning Group is currently considering how to mark graduation, but any event “will have to be virtual as given the current public health advice, it is simply not possible to have any large group gatherings and it will not be possible for some time yet”.

“This decision was not taken lightly, but it is essential in light of the public health directives issued by the government,” the spokesperson continued.

“Some 4,000 students are due to graduate and, in the normal course of events, there would be 8,000 guests attending ceremonies over the week. As a result, you would have close to a thousand people in the University Concert Hall to witness the occasion at each ceremony. This is not possible under the current guidelines, which dictate against such gatherings at the current time. Student representatives have been canvassed and the overwhelming majority agree with this course of action. Every decision will continue to be guided by public health advice.”