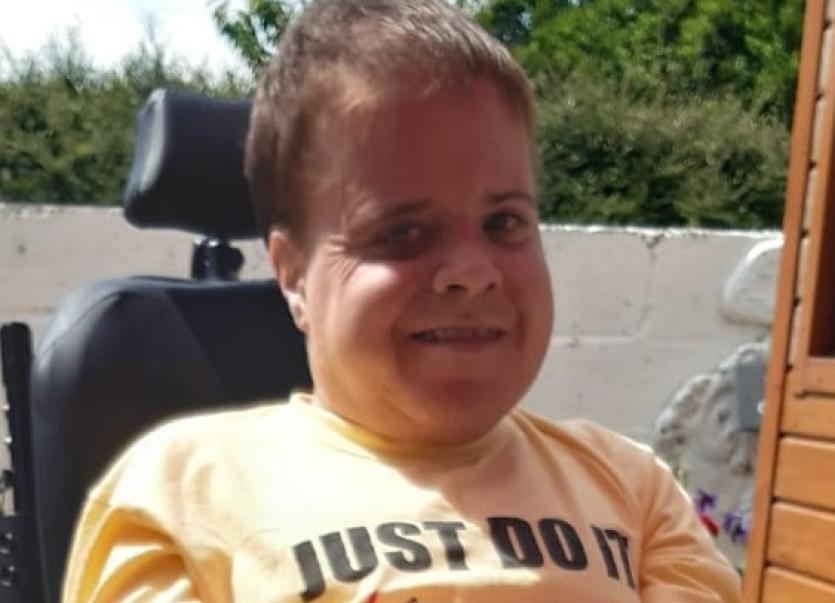 The late Darren Noonan , pictured, was 'someone who was completely at home with himself'

HUNDREDS of people turned out in Limerick today to line the streets as a mark of respect to the late Darren Noonan "who brought nothing but joy and happiness" during his 35 years.

Darren, who had faced many health challenges throughout his young life, passed away suddenly on Monday at his home on Keane Street, Killalee.

Due to Covid-19 restrictions, Darren’s funeral Mass in St John’s Cathedral at 1pm this Friday was private but was streamed live over the internet.

As his cortege left his home on Keane Street, hundreds bowed their heads and blessed themselves as it passed by.

“I think everything we would want to say about Darren can be summed up in one word and that word is love,” said Fr Tony Mullins, the chief celebrant at Darren’s funeral Mass.

“Darren radiated love. He was a channel of God’s love to the world. There were no masks. A meeting with Darren was a delightful encounter with someone who was completely at home with himself and because Darren was so comfortable in himself, in a way, he disarmed all of us of our human shields and the pretense that we often and all put on, on occasions.”

Fr Mullins said it “really didn’t matter who you were, be you the mayor of the city, a national celebrity, a member of the county hurling team, a radio presenter, a sports star, a priest, a medical consultant, Darren charmed all of us by the love that emanated from him”.

Darren’s brother Eddie recalled the complete joy his younger sibling had brought to his family down through the years.

“For each and every day of his 35 years, he brought nothing but joy and happiness to our family,” he said before turning his attention to his parents, Mike and Kathleen, seated in the cathedral’s front pew. Mike and Kathleen have sadly also buried their son Robert.

“Darren loved mam and dad more than anything and they loved him even more. He was their world, they worshipped him and he worshipped them.

“Man and dad,” he said, speaking to them directly, “Darren knew every day of his life just how much you loved him. No parents could ever have done any more for anybody.”

As a brother, Eddie said he just felt “lucky to have had Darren in my life”.

“Darren was my hero and he taught me so much about life. Darren was the most positive person I ever met. Darren met so many challenges but he met every day and every situation with a smile. Darren was the easiest person in the world to please - all he needed was to feel loved, and maybe a couple of sausages and chips from time to time,” he smiled.

Symbols of the full and happy life Darren lived were placed on the altar.

A picture of a smiling Darren rested on top of the lid of his coffin.

Among the gifts was Darren’s favourite cushion which he loved putting behind his head in his wheelchair. On the cushion were the words, Hug Me. Darren loved giving and receiving hugs.

There was a bracelet which Darren always wore. It was bought by his mam Kathleen in Lourdes where he had great trips with Fr Tony.

His money box was a reminder of the times Darren would ask for “any change you might have” so he could put it in every day to save for his favourite place, Ballybunion.

His Google Home speaker, mourners, who were tuned in from right across the world, heard, was one of his best friends.

“Music was Darren’s passion, from 60s to dance classics, he took great comfort as he sat back in his sitting room,” said Eddie’s fiancee Rachel who gave a little insight into each of the mementoes.

Eddie said that everybody who knew Darren well will know his favourite band were The Doors.

“His favourite song was Come on Baby Light My Fire,”  said Eddie, his voice cracking.

And of course his Limerick jersey took pride of place at the altar.

“He was honoured to wear his county colours for his love of hurling and all the training sessions he went to in St Patrick's and the Gaelic Grounds,” said Rachel.

“Darren was probably in every GAA grounds in the country especially in the 90s when he was able to go to matches,” said Eddie.

“In recent years when his health failed, he had to content himself with watching matches on the TV. The fact that he did see Limerick win the All-Ireland in 2018 was a great source of joy in Darren’s life.”

Eddie thanked all the medics at University Hospital Limerick who looked after Darren during his illness as well as those who had supported him in his education at St Patrick's School, St Gabriel’s and Enable Ireland.

“With Darren’s passing a light has gone out in all of our lives but for Darren his light continues to shine bright,” said Fr Tony Mullins before inviting Rachel to read a poem dedicated to Darren’s life.

“Sleep peacefully darling, we will love you always," were the final words Rachel uttered before Darren’s coffin was carried from the cathedral out into the June sunshine to the strains of one of his favourite songs, Grace.

On this May morn, as I walk out, my thoughts will be of you