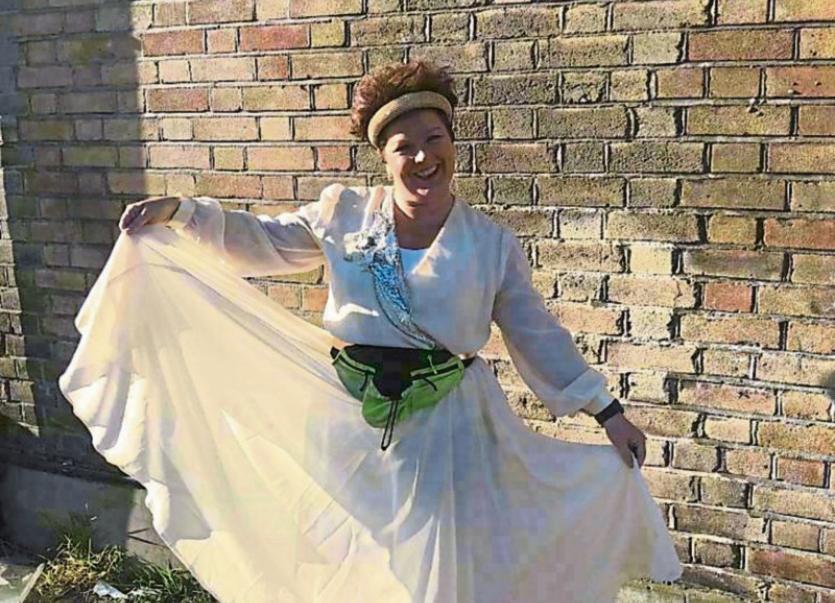 A LIMERICK woman managed to stop traffic in leafy Surrey in England after she took part in a unique lockdown fundraiser.

Mairead Quirke, who is originally from Croom, donned a vintage wedding dress she had bought in Brighton, and ran five kilometres near her home as part of her efforts to raise money for a charity which supports Irish pensioners in London.

Mairead, who works for investment bank Goldman Sachs, is based at home due to the coronavirus pandemic.

Over the last week, she has ran five kilometres a day for five days in order to raise money for the Southwark Irish Pensioners Project.

On the final day, she decided to have a bit of fun, so she donned a vintage wedding dress, and set off at dawn.

“A police van passed me and slowed down. I must have looked like a right lunatic. I was wearing a wedding dress, and had a sparkly head band on. My neighbour was – at a social distance – motivating me, shouting come on,” Mairead laughed.

“This challenge would not have been a big thing for a lot of people but for me it was. It's not a big deal. There are people doing massive things. That's just a small thing. It was lovely to get that amount of money for charity,” she said.

Mairead had volunteered with the Southwark Irish Pensioners Project when she first came to London.

But starting her new job in 2012, she was not in contact with them as much as she wanted to be.

It was only with the onset of Covid-19, she found she had more time on her hands and reconnected.

“It's a really nice project. Their funds were down. They weren't able to do their St Patrick's Day shindig, they won't be able to have a summer party wither. They reached out to pensioners, gave them puzzles and wool,” she explained, “I thought I might as well do something and earn a few quid. At the start of lockdown, I built up to when I felt I could do it.”

She actually started the challenge on May 15, which is her grandfather’s anniversary.

You can still donate to Mairead’s cause. Search MQ’s 5 Days of 5’ks on www.gofundme.com for more information. Alternatively, telephone the Southwark Irish Pensioners Project on 0044-2072375841