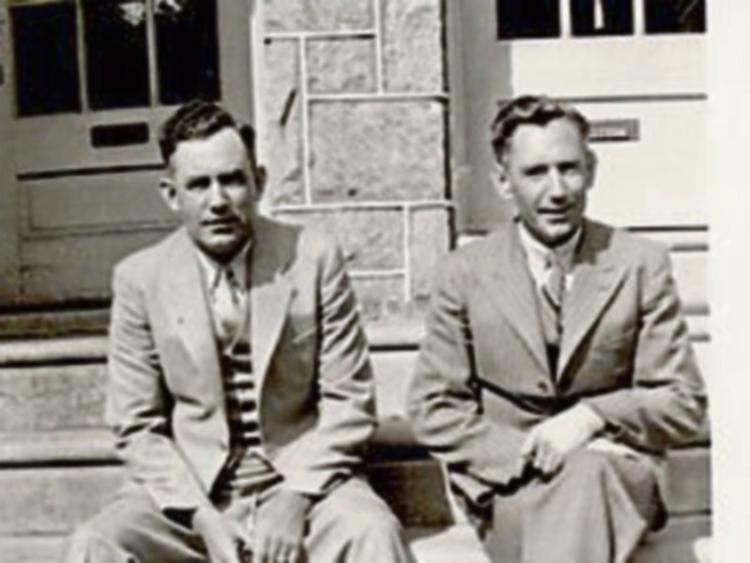 Con with Ned Cregan, father of Eamonn, during Ned’s visit to the USA with the 1936 All-Ireland winning Limerick team

WHEN I’ve had occasion to tell American friends that my father’s father, Con Cregan, was in the I.R.A., they typically say in response: “Wow – was he a terrorist?” Or they ask, “Have you read Say Nothing?” – referring to Patrick Radden Keefe’s recent book on the Troubles. “No, not that IRA,” I try to explain; “he was in the old I.R.A.”

But Americans don’t know what “the old I.R.A” means. So I try again: “He was in the Irish war of independence. You know – the struggle to end British rule in Ireland, that began a few years after the Easter Rising? Yeats wrote a poem about that.”

Con Cregan was born into a farming family in the parish of Monagea, Newcastle West, and by the age of sixteen had joined the Irish Volunteers. On Easter, 1916, his company marched to the gathering point at Glenquin Castle to await arms from the Aud, (a gun running ship) which never arrived. They waited for hours until news came that the rising had been called off. From then until he left the country in the spring of 1924, he was intimately involved in the violence and danger of a life committed to the republican movement.

When I was a child, we lived near our grandparents in Philadelphia—two blocks from my mother’s parents, a bit further from my father’s. We saw them often. Because they had all been raised in the west of Ireland, the way they spoke and behaved made them stand out from most of the people around us. We bragged to our friends on the block that we were all Irish. Life felt ordinary, uneventful, and the fact that our family had not yet melted into America’s melting pot was something we children felt was special. And because our grandfather had fought for Ireland there was a particular excitement about him. The story—told to us by our father, or by our grandmother Lizzie (though never by Con himself)—was short on details, but stirred the childish imagination nonetheless.

We were told that he had to go “on the run,” and that the Black and Tans came often to his family’s house looking for him. Because his father refused to give any information as to Con’s whereabouts, they beat my great-grandfather so badly that he never entirely recovered from his injuries. These scenes played out in our minds against the soundtrack of Irish rebel songs that the Clancy brothers and Tommy Makem had made popular during the 1960s and 70s, when they performed in New York city clubs alongside Bob Dylan, Judy Collins, and others. Songs like The Foggy Dew, The Patriot Game, The Minstrel Boy, or The Rising of the Moon, were among those in frequent rotation on the family record player.

He died on Memorial Day in 1976, the year of the American Bicentennial, a naturalized citizen with three American sons and eleven American grandchildren. I wanted him not to have grown old, and hard of hearing, and gradually blinded by macular degeneration. He was a proud man who had seemed wounded by the onset of these disabilities. It was perhaps fortunate that a stroke took him quickly. At the time I knew nothing of death. No one I loved had ever died, until he did.

Since the commemoration of the Rising I attended here in New York City, I’ve been trying to learn more about the young man I never knew, and to understand why he and his brother Ned joined the fight at a time when the majority of Irish people were not yet behind the nationalist cause. I searched through a box containing papers and photographs he left behind. There, in a small, pale green box is his Tan War medal, along with a careful narrative, in my grandmother’s handwriting, listing in chronological order his activities during the war of independence. This, I knew, was a necessary part of his application for a pension for his service, which he eventually received. Among the many actions listed is an attack on the R.I.C. barracks at Killmallock, which took place on the night of May 27-28, one hundred years ago.

Online, I found an obituary of Con’s father Michael, which told me something I had never known: that my great-grandfather had been a member of the I.R.B. and an early member of Sinn Féin. His connection to the I.R.B. would have put him in political as well as neighbourly contact with major figures whose families lived nearby – Con Colbert, who was executed in 1916, and Con Collins, who was arrested on Easter morning 1916 for his role in planning the Rising, and who later became West Limerick’s first Sinn Féin MP. I tracked down the witness statements of other West Limerick men in the Bureau of Military History collection and learned that the Cregan homestead was where East and West Limerick Volunteers gathered to discuss whether they should attempt an attack on the Newcastle West or the Kilmallock R.I.C barracks.

They chose Kilmallock because the Fenians had attempted to capture it in 1867, and this time Limerick men would be joined by men from Cork, Tipperary, and Clare brigades. That night, as gunfire was exchanged, Volunteers set fire to the building by smashing holes in the roof and tossing in paraffin-filled bottles. The barrack was eventually engulfed in flames, but the police had withdrawn to an outbuilding and refused to surrender. Nonetheless, the Volunteers felt victorious because they had destroyed the building, as the Fenian attack had failed to do. Constables Thomas Kane and Joseph Morton died, as did the young Volunteer Liam Scully, shot through the throat when he stepped into the street a moment too soon. The West Limerick men buried him in a ceremony held the following night in Templeglantine churchyard. His memorial card is among the papers Con left behind. I imagine that the Covid-19 crisis will have postponed any formal commemoration that the town of Kilmallock may have been planning. From what I have read of recent ceremonies—like that at Soloheadbeg—the effort to include descendants of constables who were killed makes good sense, however much it would have incensed nationalists of more contentious days. When I look at descriptions of the night at Kilmallock, I think of Con at twenty, adept at handling rifles and pistols, paraffin and Mills bombs, trenching roads, running through fields, hiding in hedges, and carrying wounded and dead comrades. He spent his formative years in what the Irish national anthem calls the bearna baoil  — the gap of danger. Much of it looks in retrospect like trauma, a word not used in those days. I think of the lasting damage on both sides. No wonder he never talked about it. It became increasingly clear from my research that my grandfather’s willingness to dedicate his youth and risk his life for the republican cause was powerfully determined by family loyalties and where he grew up. What’s harder for me to uncover is how it felt for him to abandon that countryside he had traversed so often while fighting in those years, leaving behind friends, family, a whole way of life. As the eldest son, he would have inherited the farm. But he seems to have wanted a more secure and independent life than the farm would have allowed for himself and wife-to-be, who had grown up nearby. As fate would have it, that independent life would be lived in another country.

My mother recently told me that when Con and Lizzie returned to visit Ireland for only the second time in the nearly half-century since they had left, someone—possibly an old anti-Treaty comrade—asked him to smuggle money there for the I.R.A. On checking their passport visas, I realized that this would have been in 1972, the deadliest year of the Troubles. She also told me that Con had angrily refused this request, and never spoke to the man again. He was out of the patriot game. It had been over for him, I believe, ever since he took a ship bound for Nova Scotia and made his way to join Lizzie in New York—leaving behind all that passion and violence and danger to build a life as a peaceful man, a father and grandfather who made a careful living driving buses for the Philadelphia transit system. I know there was some bitterness for him in losing the dream of a united Ireland, and in memories of the damage he had witnessed and engaged in to bring that into being.

I wish that I had asked him more about his experiences when he was still alive, and I regret that I didn’t try harder to draw him out. Maybe, despite his habitual reserve, he’d have felt some relief in talking about the life that he led then, and the Ireland that he lost in leaving—a world that his American descendants, across the wide chasm of cultural difference, will never be able to fully comprehend.

Mary Cregan teaches literature and writing at Barnard College in New York City. She is the author of The Scar: A Personal History of Depression and Recovery (Lilliput Press).