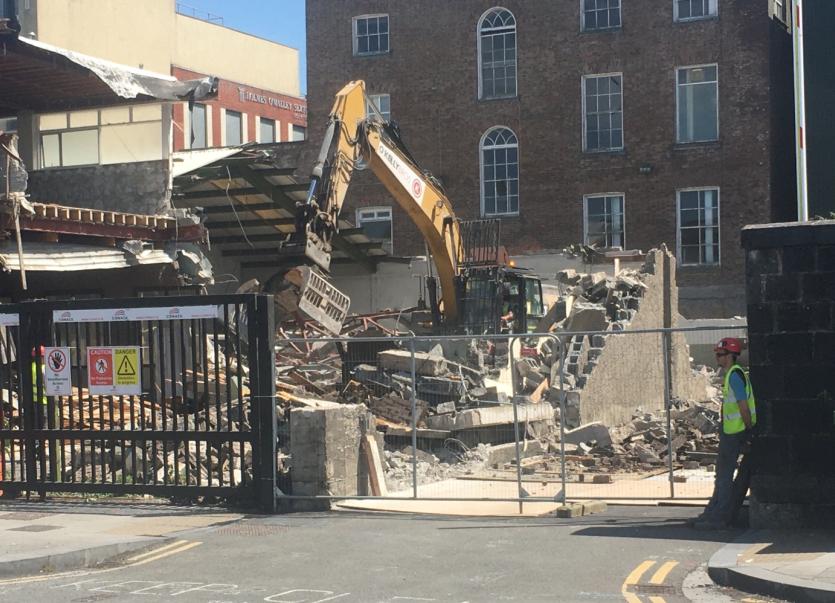 It is an end of an era as many would remember heading to the corner of Cecil Street and Bishop's Quay to pay their ESB bill.

The location will be transformed into a multi-million euro new office complex.

️: Demolition in the sun: Big sign of progress in #Limerick as knocking of old ESB building & rear of ex-IGB office at Bishop's Quay under way. In it's place will be a landmark multi-storey office block (story: https://t.co/88D2qcm3Ko) ⬇️ pic.twitter.com/BWn3j48lmp

Cllr Olivia O'Sullivan tweeted: "It’s reassuring to see development continuing in Limerick city in spite of the pandemic and the country facing into tough times."

It’s reassuring to see development continuing in #limerickcity in spite of the pandemic and the country facing into tough times. Demolition is underway today at the site of the old ESB building on the corner of Cecil St and the quay, for the new Bishop’s Quay development. pic.twitter.com/LO515hxlGj

Kirkland Investments is behind the development.


Sources close to the developer say, it will “set the standard” for building developments in Limerick, and deliver 100 construction jobs, and, in time, hundreds of permanent office positions.

However, unlike the last development, which received planning permission in late 2016, it will rise just seven storeys instead of 14.

Apartments will remain in the development, with the planning application set to show 44 "luxury living spaces".

To facilitate the development, the former ESB premises at Cecil Street will be demolished, as will the rear annex of the former Bord na gCon offices adjacent to Henry Street garda station, with the adjoining coach house tastefully renovated.

Sources close to the multi-million euro development have told this newspaper that they would hope to have “cranes in the sky” as soon as February next, saying: “They want to press the button immediately.”

“They want to get the amendment in, get the cranes in the sky and start building in February. They are moving at 100 miles per hour here,” the source added, pointing out it’s likely to be the first major private development in the city in more than a decade.

The proposal will be broadly the same as the one accepted by planners in 2016 – only that it will be half the size.

The reduction comes after Kirkland went to the market, and deemed it too risky to build 14-stories.

“They’ve met with a number of clients who were interested in office space and unfortunately, some of these approaches have fallen through,” the source said, “There were businesses, one which wanted to move 300 people in immediately. But they wanted to move in straight away. The strongest point in the market are those who move quickly and need space straight away.”

“The developer realises they need to build first and then pass it on. They feel the business model wouldn’t work on 14-floors. It would leave them exposed in terms of risk,” the source said.

She said: “It speaks to the work being done over the last number of years by all the city’s stakeholders to improve the offering for FDI and indigenous companies in the region