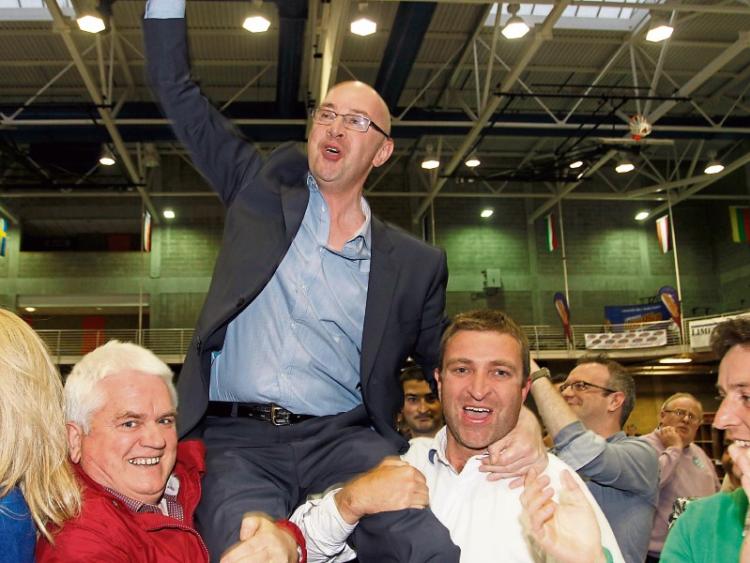 Cllr Michael Collins hoisted shoulder-high following his election at the UL Arena in 2014. This year’s mayoral election will be a more low-key affair

While a venue has not been confirmed, it looks increasingly likely ​that Limerick Racecourse may be given the nod.

The facility is no stranger to hosting political events, having hosted local and general election counts.​

But the annual mayor-making ceremony will be shorn of its usual pomp and circumstance, with social distancing rules meaning only a limited number of people will be allowed into the venue to bear witness to the event.

Indeed, it’s for this reason that the meeting will take place at the Limerick Racecourse, rather than its regular venue of County Hall​ at Dooradoyle.

Newcastle West-based councillor Michael Collins is the candidate being put forward by Fianna Fail. And it’s likely that, thanks to a grand coalition of the Civil War parties, he will become first citizen.

He said: “One thing is we need a large venue, so that would tick the box. It doesn't matter where it is, it's in our jurisdiction obviously in the county. Any place that can accommodate 40 members, management and press will be acceptable. It will be difficult to have all the people we'd hope to have there. But we live in a different world, and we need to work with the constraints.”

While Cllr Collins looks likely to be mayor, it will be his party colleague, Abul Kalam Azad Talukder who’ll take the role as deputy.

Meanwhile, the election for the metropolitan district leader is expected to take place on Monday, June 15.

As part of the Fine Gael-Fianna Fail carve-up, Cllr Sarah Kiely is in line to receive this high-profile role.

While this election would normally take place at City Hall in Merchant’s Quay, it’s likely to be moved to County Hall in Dooradoyle to aid social distancing.