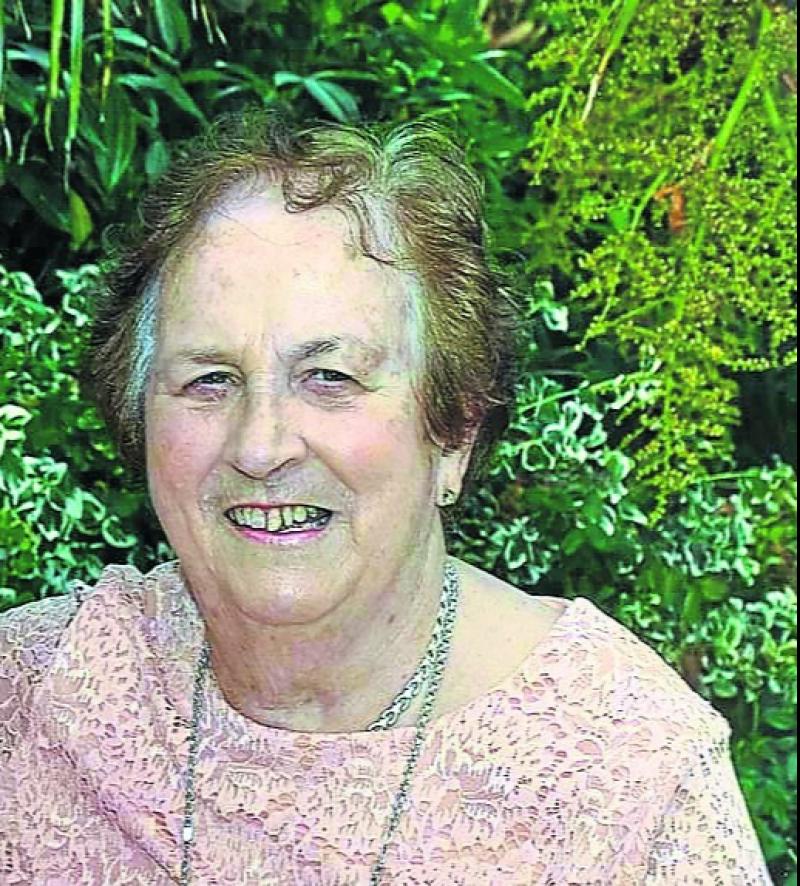 THE LATE Nora Enright, affectionately known as Auntie Nora, was a beautiful person with a beautiful way about her, said Minister Patrick O’Donovan.

And Newcastle West gave her a beautiful send-off on Sunday. The route from the church door to the cemetery gates was lined with hundreds of people. While all obeyed social distancing guidelines they clapped as one to show their love and admiration for Nora. At one point a recording of Bring Flowers of the Rarest, sung by Canon Sydney MacEwan, was played to reflect her deep faith.

Born in 1942, Nora worked for 61 of her 78 years. Until her recent cancer diagnosis she never took a sick day from work or had ever spent one night in hospital.  She worked in Leonard’s TV shop for 41 years and in Newcastle West’s Post Office for twenty years, right up to February.

Nora also did the door in the Olympic Ballroom, later the River Room Hotel and recently for the adult dancing group in the Rathkeale House Hotel and then the Longcourt House Hotel.

Minister O’Donovan said he has seen very few people held in the esteem that Nora was held in.

“She was involved in a huge amount of charities. She raised thousands upon thousands of euros for Milford Hospice over the years. It was fitting in some ways that her last few days were spent there. She was involved in so many things - she collected the baskets at Mass, and was involved in the Lourdes pilgrimage, Killoughteen National School, St Vincent de Paul.

“Nora had great friends. I don’t think there was a person alive who would have a bad word to say about Nora Enright. The best legacy you can leave in this life is that you leave with the turnout of warmth she had on Sunday,” said Minister O’Donovan, who described her as an “icon around the town”.

“She made an indelible mark in Newcastle West and surrounding areas. She will be really missed. Those of us who were fortunate enough to know her would call it a privilege,” said Minister O’Donovan.

Nora had worked beside Newcastle West postmaster, broadcaster and teacher Seamus Hennessy for the last seven or eight years in the post office but he has known her since he was in the pram. During her time as cashier at the door of the Olympic Ballroom back in the Showband days, Mr Hennessy said Nora was revered by the likes of Dickie Rock, Brendan Grace and well known to the stars of the Showband and theatre era.

“She was a joy to work with and was central to the community. The entire community had huge respect for her. She had an empathy with everyone and she had this ability to cross age barriers. She was as comfortable with young people as people her own age. She felt her role was to mind and to look after people and to ensure that they were served well, respected and comfortable dealing with her. She looked after everyone,” said Mr Hennessy, who described her as a “refined lady”.

Since her peaceful passing after a short illness in Milford, Mr Hennessy said they have been inundated with lovely words from their customers who will miss her terribly.

Deeply regretted by her loving sister and rock Alow Kelly, nephews, nieces, grandnephews and grandnieces, cousins, and a wide circle of wonderful friends. Nora’s life could be encompassed by a strong faith in God and a strong love of family, friends and community. Rest in peace Auntie Nora.