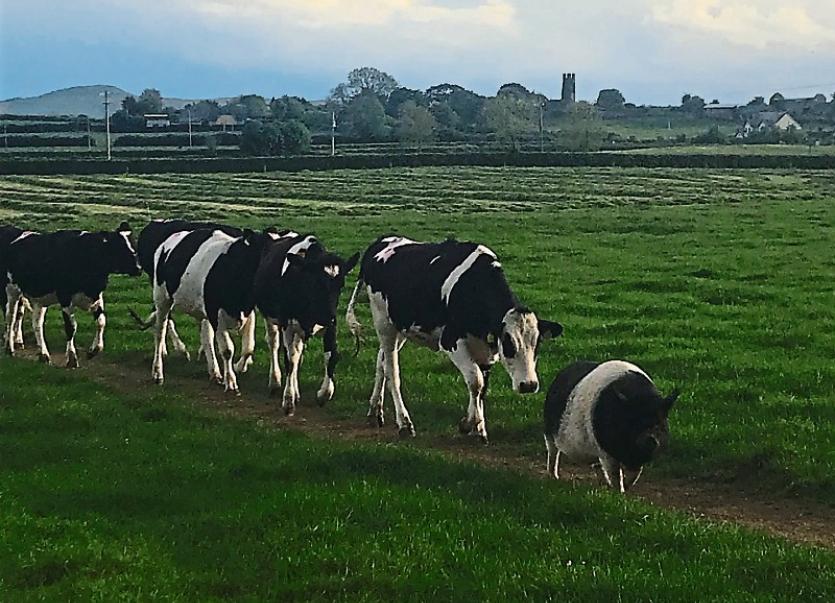 THIS piggy isn’t in the middle – he is at the front leading Friesian heifers to pastures anew.

The black and white British Saddleback was pictured bringing the film Babe to life by Angie Fitzgerald in Adare.

“It is just one of those quirky moments. In this day and age with everything being so sad it is nice to have a little fun. He even look likes a cow because of the colouring,” laughs Angie, who farms with her husband Kevin. They have two children - Ruadhrí, 13, and Emma, 11.

The pig was a birthday present for Emma almost three years ago and was named Jellybean.

“He was a supposed to be a micro pig but he has obviously grown. He is a real pet. He’s very funny. He’s not afraid of the animals on the farm. We have cattle, two horses and three dogs.

“He loves going in there and mixing with the cows. You would often find him in the middle of the cows eating with them or sleeping on the ground with them. They were a bit suspicious initially but they got to know him and he is part of the crew,” said Angie.

It is like the film Babe where the pig gains the trust of the sheep. Babe goes on to win a herding competition at the county fair. Jellybean isn’t far behind him although there will be no agricultural shows to compete in this year.

“That particular day we were calling the cows down to the very bottom of the field and he was in with them. He responds to his name so he went off and they all followed him. He got in the act. It’s very funny,” smiled Angie.

The Limerick Leader understands their normal sheepdog, ironically called Peppa, has its nose out of joint currently. It is just like in the film when Rex saw Babe's actions as an insult to sheepdogs.

But even if Jellybean’s new career as a working pig doesn’t take off there is no chance of him ending up on the table.

“Emma adores him – we all do. He is complete pet. He will be three-years-old in July. He just wonders around the farm. He eats and sleeps and goes in the mud when he can. You see him in the shade, out for the count asleep. He has a great old life.

“He is just a lovely pig, he is very friendly. He loves being petted and scratched,” said Angie, originally from New Zealand.

The Fitzgeralds live alongside a very busy road. Often walkers or cyclists stop to look at the pig in with the cattle.

Locals better enjoy him while they can as Jellybean might be swapping Adare for Hollywood in the future!