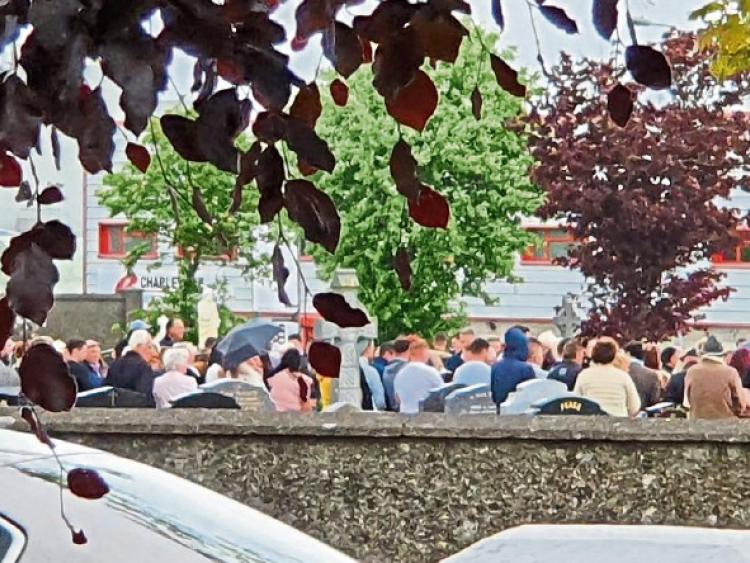 A MASS gathering at a burial over the weekend is a “slap in the face” to those obeying Covid-19 restrictions around funerals, said Deputy Niall Collins.

The photograph, right, shows the number of mourners packed into Charleville graveyard on Sunday afternoon. One local told the Leader there has been a lot of new English registered cars seen in the town.

Deputy Niall Collins said he has got a lot of angry phone calls from Limerick constituents as the photo has been shared on WhatsApp.

“People are furious. When they are going to their local shop within a few kilometres they are being stopped and questioned by gardai. And yet you have cars travelling from England and they don't seem to have any issues at all. It can't be one rule for one and another rule for somebody else," said Deputy Collins.

The TD said there are clear guidelines - there should not be more than 10 people at the graveside.

"One of the hardest and saddest parts of this coronavirus pandemic is that we can't mourn the passing of our loved ones like we normally do. We can't shake hands at the removal, we can't go to the church unless we are immediate family, we can't go to the burial.

"People are standing outside their houses to pay their respects as the hearse passes by. And then those who are obeying the rules are seeing a huge crowd in a graveyard on top of each other..." said Deputy Collins.

He said this behaviour puts priests, undertakers and gardai in an unenviable situation.

"The guards can hardly go into a graveyard to clear it while someone is being lowered into the ground. The undertakers and priests are doing their best. It is an insult to the rest of us. A slap in the face," concluded Deputy Collins.

A Charleville resident said it was a “holy show”.

“England is rife with the virus and they can travel over here not a bother. If I go to the shop I am often stopped by the guards and spoken to. I can’t understand it.

“I haven’t been able to go to funerals and then you see a crowd like that rammed into the graveyard. Afterwards they were out on the road drinking and eating together. Are we the fools doing what we’re told?” asked the local.

A garda spokesperson said they liaised with the family in advance of the funeral and guidelines surrounding funerals were clearly outlined.

“No incidents of note were reported or are under investigation. An Garda Síochána continues to observe generally excellent compliance to public health guidelines by the public.

“An Garda Síochána continues to interact with the public on a graduated response of engage, educate, encourage and as a last resort enforce the regulations as part of the public health guidelines,” said the spokesperson.

“It is inexcusable and in my opinion reckless. People are putting their own lives on the line and that of others. And I would ask those Travellers, to please refrain from attending funerals such as in large numbers,” Mr Collins told RTE.