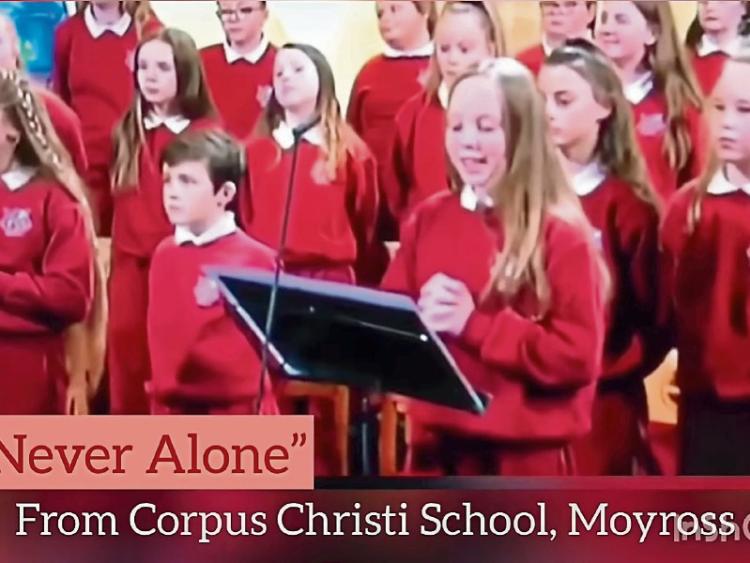 HE may be navigating Ireland through a global pandemic but the country's chief medical officer took time out of his day to send some high praise to a Limerick choir.

In a tweet from his personal account on Saturday afternoon Dr Tony Holohan said a performance by the Corpus Christi primary school was brought to his attention and he was asked to circulate it “given the relevance of the message”.

The chief medical officer at the Department of Health who grew up in Limerick and attended the Christian Brothers Secondary School, Sexton Street, went on to say it is “beautifully sung. Expertly conducted. Well done to all

The group of students in question who are from both fifth and sixth classes at the Moyross school are filmed singing the song, Never Alone.

“We were invited up to sing at one of the Masses RTE have on a Sunday morning in the RTE studios,” school principal Tiernan O’Neill explained.

“Given the current situation in the country the song really resonated with people. The fact Tony Holohan is navigating these choppy waters, our choir director, Orfhlaith Prendergast, sent it on to him during the week and he responded which was lovely.”

At the beginning of the song, student Amy Flanagan, who is the lead singer during the performance, reads a short message: “There are many people across the country who feel isolated or lonely whether that’s in their homes, in hospitals, in nursing homes or wherever you find yourself watching today. You are loved, you are appreciated, and you are cherished.”

The hymn, she said, “gives the message that you are never alone”.

Orfhlaith Prendergast who is one of the teachers in the school conducts the choir while Doireann Wylde is on keyboard and Clare Curtin plays the flute.

“The children are wonderful ambassadors for Moyross,” continued Mr O’Neill.

“It’s an area which, over the years, secured lots of media headlines so it’s lovely to see it get headlines for the right reasons. These children are writing a new chapter in the story of Moyross.”

The national school choir is becoming a familiar fixture on the national stage having received huge attention following the death of Dolores O’Riordan. The choir were on RTE on a number of occasions performing their rousing rendition of Limerick band, The Cranberries hit, Dreams.