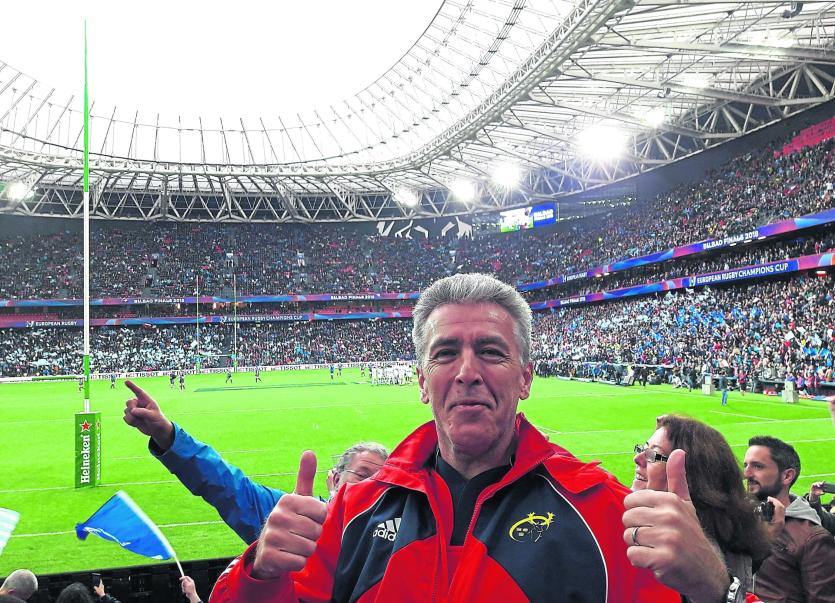 The only man wearing the red of Munster. Seán at the Leinster V Racing final in Bilbao. We are not sure who he was supporting

People will be familiar with the phrase “No Pasarán”. (They Shall Not Pass). It was the slogan adopted by the population of Madrid during the dark days of the Civil War when Madrid was besieged by Francoist forces from 1936 onwards.

Those two words encapsulated a spirit of grim resistance in the city and that spirit has been revived over these last few weeks.

The stats tell us that the curve is flattening but it is difficult to find solace in cold numbers.

One area where hope can be found is the nightly communal outpouring of gratitude to health and frontline workers from the balconies in my street. Five minutes of sustained applause is followed by a streetwide sing song and a kind of communal disco, where dancers keep to their balconies. It’s a demonstration of hope and determination by ordinary people across Madrid to beat the virus, as well as maintain sanity in the never ending lockdown.

The 8 0’clock ritual is hugely important here. I am privileged to live in an “ático “(top floor apartment) with a large terrace, near the centre, just west of the river. Most Madrileños live in apartments and normal social life is played out in bars, terrazas, restaurants, squares and parks.

Irish people would find it hard to fathom how essential going out to bars and restaurants is for people of all ages; “going to the pub for a pint” doesn’t begin to cover it!

This is a far more draconian lockdown than the one imposed in Ireland so far.

Police will stop you and ask for your reason for being on the street. No “personal exercise” is allowed outside. You can walk to the local shop or chemists or travel to a medical appointment. That’s it.

Unless of course you’ve got a dog, which you are allowed to walk.

The dog adoption centres in Madrid emptied in the week leading up to lockdown on March 15 as thousands of Madrileños suffered a mass outbreak of “puppy love”.

On Saturday March 17 the government announced that from April 27 on, children under 14 will be allowed out with a parent for a very limited session of exercise, wearing masks and strictly respecting social distancing. For Irish families with young children it must be difficult to imagine what five weeks confined in a small flat with young kids is like, without even the respite of a garden.

The 8 o’clock ritual is led by two girls and a guy who live in the apartment block opposite me.

The flats immediately below and to the left of them are occupied by two elderly ladies in their dressing gowns, reminders of “the most vulnerable” section of society, laboured in their movements but applauding and dancing along with the best of them!

The flatmates must be musicians or performers of some kind as they have a powerful sound system which blasts out feel good, bop along music.

Friday and Saturday nights are special and the songs they play go on for longer as the three mates keep the barrio rocking. Every time an ambulance or police car goes past, people stop dancing in order to applaud and shout down gratitude and encouragement.

These nightly communal gatherings leave one with a feeling of renewed faith in humanity and people’s essential decency, and they are destined to continue.

The government has extended the lockdown to May 9 and will ease off on restrictions very gradually after that.

People are generally supportive of the Socialist/Podemos centre -left coalition, though there has been inevitable criticism from the opposition parties, the conservative PP, the centre-right Citizens party and the populist far-right Vox party.

Prime Minister Pedro Sanchez is undoubtedly Europe’s most handsome PM (sorry Leo) and he has shown himself to be more than just a pretty face in this crisis, hitting the right statesmanlike tone in his public appearances.

The “Estado de Alerta” (State of Emergency”) declared by the government has given the State sweeping powers to intervene and deal with the crisis.

Private hospitals have been brought into the public domain, hotels have been taken over, three ice rinks in the capital have been turned into morgues, temporary redundancy deals have been subsidised by the government as more than 800,000 jobs were lost in the second week of lockdown alone. The government has just announced a scheme for a “ basic minimum income” for households in danger of poverty, another example of the State exercising its muscle in an unprecedented way.

Tales of old people dying alone in residences and hospitals are heart breaking, their loved ones unable to even say a final goodbye.

People say that we “do death well” in Ireland but imagine not being able to have a few final words with your mother or grandmother as death approaches.

What is truly heartening in the midst of all this horror is the renewed sense of solidarity and community being displayed by Spaniards.

I am one of the optimists who believe that a better, more reflective and caring society will emerge from this crisis.

My neighbours across the street have home made banners hanging from their balconies;

“Todo saldrá bien, estamos en eso juntos” (“Everything will be ok, we’re in this together”)

Who knows, when all of this is over, and Madrid returns to “normal” I may even run into them some Saturday at the” aperetivo” in the local market, surrounded by hundreds of other gregarious, tactile, noisy, chatting, gesticulating Madrileños, and I can thank them personally for their role in keeping everybody’s spirits up during the dark days.

Seán O’Donnell
Age: 58.
Born: Dublin 1961, grew up in Limerick.
School: Crescent College Comprehensive.
Graduated University College Dublin 1984.
Career and life: Seán has lived in Spain since 1984 He first set up home in Malaga. and in 1989 he move to Madrid where still lives.
He works as a secondary school teacher of History and English at the British Council School of Madrid.
Seán was a very promising sportsman and played rugby and soccer to a fairly high level in Limerick up to age 20. He togged out with Garryowen in the late seventies and early 80s and trained with the first team in pre-season of 79-80 and was briefly number two to the great Tony Ward, Seáns major claim to fame!
He played soccer with the Vereker-Clements team under Gerry Webb and played with top names including Tommy Gaynor (Nottingham Forrest) Lloyd White, Declan Hyde, Frankie Glynn, Joe Hanrahan (Man Utd) and Peter Coyle.
Seán's dad John O’Donnell was very well known in the city and was chairman of Limerick A.C. and founder member of the Community Games as well as a mentor for athletes including Olympian Frank O’Mara.
His sister Liz , who moved to Dublin, is a former T.D. and Junior Foreign Minister and signatory of the Good Friday agreement while eldest sister Yvonne Condon lives in Caherdavin, Seán is a regular visitor home to Limerick.