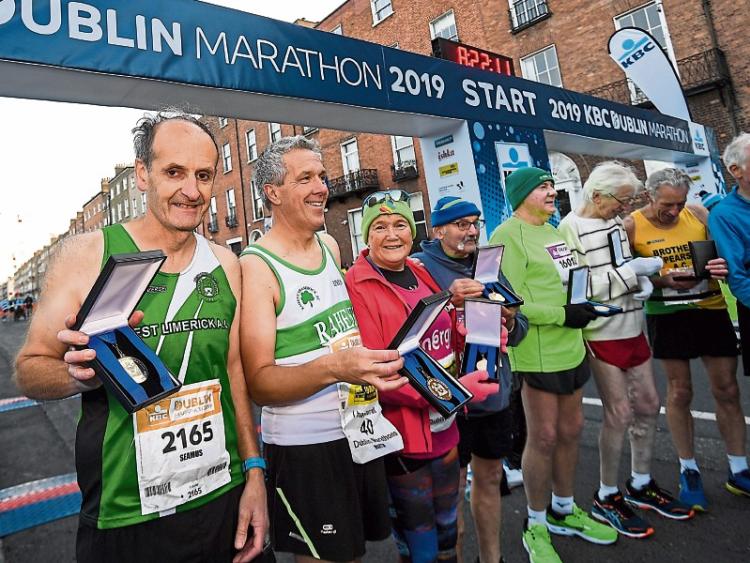 Seamus Cawley finished his 40th Dublin Marathon and received a medal from the Lord Mayor of Dublin.

West Limerick A.C. was founded in the summer of 1979. Two Newcastle West athletes, John Barrett and Mike Mac Domhnaill invited other local clubs to a meeting in the Central Bar, Newcastle West.

Abbeyfeale was represented by Christy Cullinane, Rathkeale by Mike Hanley, Dromcollogher by Fr Kelleher and Tullylease had Mike Callaghan. And so on that summers Day 1979 West Limerick Athletics Club was formed.

In the beginning member numbers were smaller but there was talent and the club was challenging for national road and cross country titles.

The club was primarily an adult club until recent years. At that time a number of parents led by coaches Ger Guina and Gary Wilmott set up the juvenile section.

At present West Limerick A.C. has over 200 members. This number would include seventy juveniles and one hundred and thirty adults. There is a very even split of men and women in the club and they try to reflect this on the organisational side as well. There is a very active Fit4Life section in the club lead by Denis Fitzgerald.

West Limerick AC have trained in the Demesne, Newcastle West for years. They compete in all County and Munster events, with some athletes representing the club at a national level also.

The club's main annual fundraiser is the Adare 10k road race and 2020 was the 26th edition.

The hard work over many years has led to this being one of the best 10k races in Munster. The success of the race helps the club to invest in the club facilities and its members.

The future of the club and of athletics in the county is looking bright and members cannot wait to train and use the new Regional Athletics Track facility which is to be built in Newcastle West.

All members of West Limerick A.C. would like to thank Limerick Council and the steering committee which is led by Jim Galvin.

The work they have done over the past number of years will benefit all the communities in Limerick county for years to come.

The strength of any club is its members and how they engage with their club. West Limerick AC are very fortunate to have a very active committee which is supported by club members and parents of juveniles.

For all the latest club information see westlimerickac.ie and Facebook - WestLimerickAthleticsClub