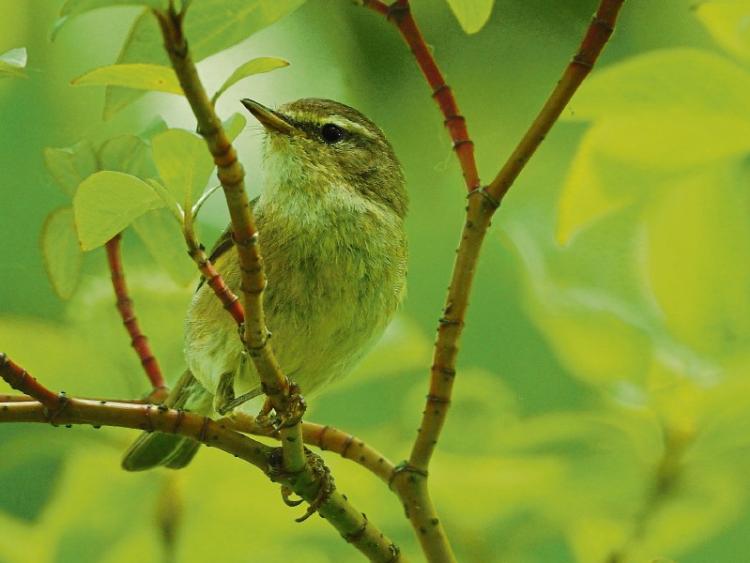 I WAS planting trees in the woodland section of my garden. This area is very wet and quite spongy underfoot. The boundary on one side ends at the small stream while on the opposite side a steep bank leads up to the road.

I also filled up two bags with rubbish. Some thoughtless individual has been throwing rubbish from the road here and it looks disgusting. Still half an hour makes a big difference and the area was soon looking clean. Even missus robin came along for a quick inspection and gave a brief song of what I assumed was her approval for cleaning up her habitat.

The bank is drier and I sometimes use this area as a tree nursery. I have sown horsechestnut trees and when these are bigger they can be passed as to family and friends.

Today I was planting a 60 alder/willow trees in the wetter areas. Alder will help stabilize the ground and is a great native species for birds, caterpillars of moths and bark loving lichens. On the roots of Alder there are nodules containing a bacteria that can fix nitrogen from the air.

Willow has pollen and nectar and filled catkins and on warmer days we have seen lots of queen bumblebees feeding on the willow flowers. The ground was easy to sink the spade into and soon all of the trees were in their new home.

With no one screaming for lunch I took the opportunity to have a look around. All of the trees were coated in large colourful lichens and mosses.

One of the prettiest flowers at this time of the year is the opposite leaved golden saxifrage. While primroses and celandines are well known this plant spends the spring literally in the shade.

This is a perennial plant and flowers between March and July. The leaves are opposite on the stems, small and rounded. Another usual feature is that the flowers have no petals.

Saxifrage grows in damp places and I have often found it on the shaded side of hedgerow banks. It often appears to flow like a river downhill and in my woodland there are big carpets of this plant. The green flowers are inconspicuous on their own but combined on mass make a dramatic display.

Next I heard another spring migrant and this time is was a bird. Despite nearly a million pairs breeding in this country it is not that well known. I could just make out the faint call of the willow warbler. As it name suggests this species is common is habitats with willow trees. A pair nest around my house each spring. When the male first arrives he spends a few days resting after his epic migration for Africa. He won’t start to really sing to sing till the females arrive a few weeks later.

Their nest is constructed from plant material and lined with feathers. The female lays five to seven eggs and these are creamy/white with flecks and blotches of brown and red. The chicks hatch after two weeks and if there is a plentiful supply of insects will fledge the nest in another three weeks. They usually rare one brood of chicks but in exceptional summers there is sometimes a second.

Willow warblers are a dull olive green colour and this is perfect camouflage for this retiring species. They feed on insect and spiders plucked for the leaves and branches of trees.