Then and Now - 'Remembering the bard' - Tom Aherne 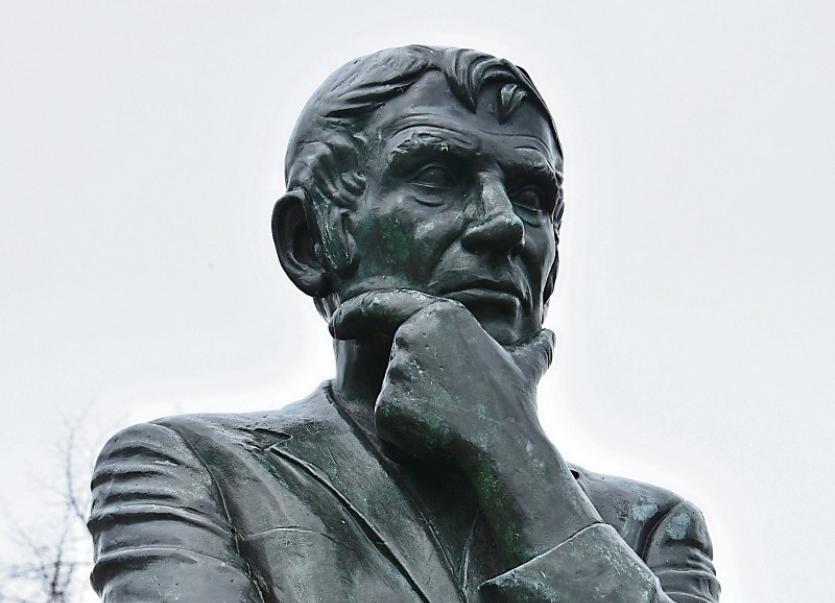 VISITORS TO Newcastle West Square can now view a bronze sculpture of poet Michael Hartnett, which was unveiled on Saturday April 16, 2011.

On a summer like day a large crowd gathered to pay tribute to one of the towns best known personalities, as part of the 12th annual Eigse Festival. The work of sculptor Rory Breslin has been described as a bronze reincarnation of Michael Hartnett standing at his ease, on a plinth of glacial erratic stone. The unveiling was done by Michael’s great friend and fellow poet Paul Durcan, who congratulated the community council, and all involved in the project. He gave a remarkably interesting talk on the life and times, of his old friend describing him as a rare genius, and a wonderful poet.

It was a very impressive ceremony that included a piper led procession from the County Council office past Maiden Street where Michael lived as a boy to the site of the sculpture. Micheal Mc Domhnaill read one of Michael Hartnett’s poems in Irish, and Des Healy read another in English. Niall Hartnett son of Michael thanked all involved and said the family was incredibly pleased with the depiction of his father. Other members of the family present included his ex-wife Rosemary daughter Lara, brothers Denny and John, sister Mary and extended family members.

Michael Hartnett was born on September 18, 1941 in the Maternity Hospital Croom County Limerick. He was the eldest son in a family of six and his parents were Denis, and Bridget, (nee Halpin) and the family home was in Maiden Street Newcastle West, until they moved to Assumpta Park in 1950. He went to live with his grandmother Bridget Halpin, a native Irish speaker from Kerry in the townland of Camas, outside the town at the age of three.

Her influence led to Michael gaining a love for the language He was educated in the local boys’ schools, Courtney and Carnegie, where he showed a gift for writing poetry. His early poems were printed in journals in the early sixties, at a time when he moved to Dublin, where he spent a year at University College, failing in all subjects.

He emigrated to London in 1965 and he lived also for a while in Madrid. In 1966 he married English born Rosemary Grantley and they had two children, Lara, and Niall. The family returned to live in Dublin, in the late sixties, where Michael worked as a night telephonist, continuing his writing. His first book ‘’Anatomy of a Cliché’’ was published by Dolmen Press in 1968. ‘’ The Hag of Beare’’ a year later, and ‘’Selected Poems’’ in 1970.

The family moved to West Limerick, in the seventies, and lived frugally in a country cottage in Glendarragh, Templeglantine, and Michael immersed himself in his writing. He won the Irish- American Cultural Fellowship Award of two thousand pounds in 1975. He also announced that he was going to concentrate on writing in the Irish language, after his collection, ‘’ A Farewell to English’’ was published in 1975.

‘’I have made my choice and leave with little weeping.

I have come with meagre voice, to court the language of my people.’’

This aroused a lot of interest and his first collection in Irish ‘’Adharca Broic’’ was published in 1978. Small in physical stature, his output was large in volume, and he followed up with two more collections ‘’An Phurgóid’’ in 1982, and ‘’An Lia Nocht’’I n 1984. He moved to Dublin following his marriage breakdown, in 1984 and the following year ‘’Inchicore Haiku’’ was released to great acclaim.

He continued to write in both Irish and English, and he published ‘’ A Necklace of Wrens’’ in 1987, ‘’ Poems to Younger Women’’ (1988) and ‘’The Killing of Dreams’’ (1992). He also published translations of Daibhí O Brudair (1985) Padraigín Haicead (1993) and Aodhagan O Rathaille (1998). In June 1990 Michael received a £10,000 literary prize, (one of many such awards over the years) from the American Ireland Fund for his work in the English and Irish languages. He followed a long line of distinguished Irish poets and writers, to receive an Award from the Fund. They included poets Seamus Heaney, and Austin Clarke, playwright Brian Friel, and novelist Mary Lavin.

He never lost his love for his home town of Newcastle West, and he often returned over the years, to visit family and old friends. He was a member of the Newcastle West Historical Society and involved with the Arts Group . He brought two poets from Northern Ireland, Seamus Heaney and John Montague, to the town to do readings. He also honoured and remembered local poets, and paid tribute to many in his poems, and verses.

His ‘’Maiden Street Ballad’’ from December 1980 and dedicated to his father went on to be a collector’s item, when it was published in booklet form. Over forty-seven verses he describes growing up in Newcastle West in the fifties. It was a masterpiece of verse, to be sung to the air of ‘’The Limerick Rake.’’ The launch was held in The Central Hotel Newcastle West, in the summer of 81 and Michael was amongst his own, and how he enjoyed it. It was a most entertaining night as he sang and recited the ballad to an engrossed audience. Whenever his name is mentioned the ballad will be at the foremost of most conversations.

Alcoholism took its tool despite the support of his partner Angela Liston, and his close friends, over the final fourteen years of his life, on September 23 1999 in Clifden Community School he read his last two poems in honour of his daughter ‘’Dán Do Lara ‘’and ’’Death of an Irishwomen’’ in remembrance of his grandmother. It was to be his final reading as he passed away in Dublin on October 13 and laid to rest in Calvary Cemetery. By the time of his death over a dozen books, had been published and ‘’A Book of Strays’’ was published posthumously by the Gallery Press in 2002.

This year we mark the 79th anniversary of his birth, and the 21st anniversary of his death. He remains one of Ireland’s best-known poets, and the annual Eigse Festival is now eagerly looked forward to each year. A highlight is the presentation of the Michael Hartnett annual Poetry Award, which is much sought after. From the Thursday evening to Saturday night the town pays tribute to the life and writings of Michael.

His statue in the Square will remind people of his greatness, and the impact he made in his native place.

Gone but not forgotten, as he continues to survey all in his native town with his hand under his chin. I passed by his statue last Saturday morning, and I wonder what he would make of the present situation if he was still with us. No doubt he would compose some poetry that included the impact of the Covid-19 virus.

I will conclude with the last verse of the Maiden Street Ballad.

So now to conclude and to finish my song: it wasn’t composed to do decent men wrong-

If I had known, it would go on so long I’d have finished before I got started.

And in times to come if you want to dip back into the past, through these pages flip,

and if you enjoy it, raise a glass to your lips, and drink to the soul of Mike Hartnett.