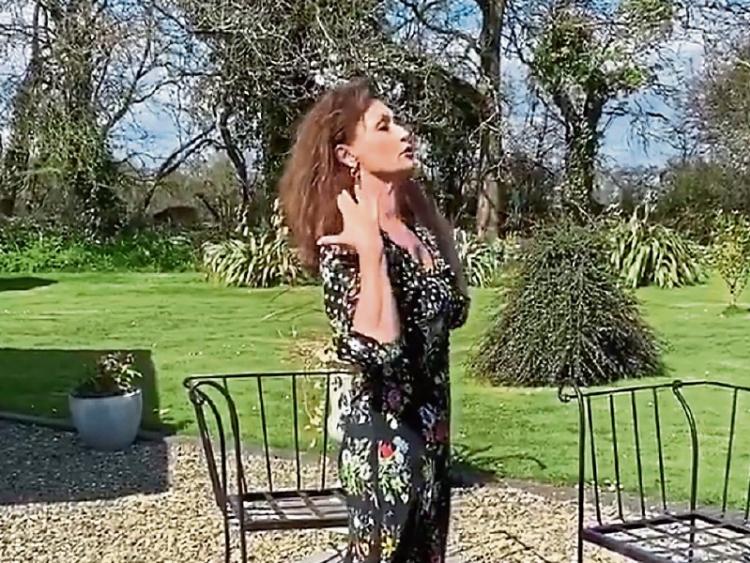 LITTLE did Celia Holman Lee think when she stepped into her back garden to do a short two-minute video on posture that it would be viewed over 100,000 times online. And not alone that but two further short clips focusing on walking, and posing for a photograph have seen the veteran fashionista amass 370,000 views in total.

Author Marian Keyes and 2FM presenter Doireann Garrihy are among those sharing or liking the videos.

“I was sitting at home and I said, what will I do? I’ll do something and I said I wonder will l start talking about posture?” said Celia this week.

The morning was March 31 last and Celia got dolled up to the nines and headed out the back with husband Ger Lee in tow.

For a total of two minutes and 17 seconds Celia spoke of the importance of posture “no matter what age you are”.

“I feel posture is your God given gift, and it’s free,” she says in the video which has been viewed 55,000 times on Facebook and 50,000 times on Instagram.

“I’m thrilled that so many people have taken something from it. I’m trying to be very diplomatic on camera but I might say the wrong thing like ‘keep your ass in’ instead of your bottom,” she laughed.

“Posture is the main thing. Over the years at the end of a style talk I would throw in at the end, ‘what is the most important part of your body to look good?’ The amount of people who would say legs or face or hair and I would say, your shoulders. Because everything hangs from your shoulders.”

On April 7 Celia and Ger headed for the back garden again, this time to do a video on posing correctly for a photograph.

“I washed the hair this morning, put on the earrings and put on the guna and said to myself I’m going to do another video,” said Celia to the camera. That one minute 50 second video garnered 32,000 views on Facebook, 22,000 views on Instagram and 16,000 views on Twitter.

“How many times have I heard people say they hate going into photographs.  That’s because you have to work at it and you have to practice these things. A tip I say is to put your chin on the mantelpiece. It’s to pretend there is a mantelpiece and it will help elongate your neck so you’re not sticking your neck into your chin giving yourself 10 double chins,” she told the Leader.

Again on April 15, the glamorous grandmother and model agent dusted off another floral dress this time for a video on walking properly. That video has been viewed a staggering 95,000 times on Twitter.

“Some of the messages I have received from people are them saying, ‘I remember it well, Celia, you fighting with us and making us walk up and down The George Hotel’. That will tell you how long I am doing this,” Celia smiled.

“Behind the scenes at fashion shows I am always saying it, ‘get your shoulders back, get them BACK, get them down and get them back and be strong on the ramp’. For me looking at models all through my life it’s always been about how they carry the clothes and showcase the clothes.

“We are a great agency when it comes to ramp models or walkers as we call them and that comes from nothing else but posture.”