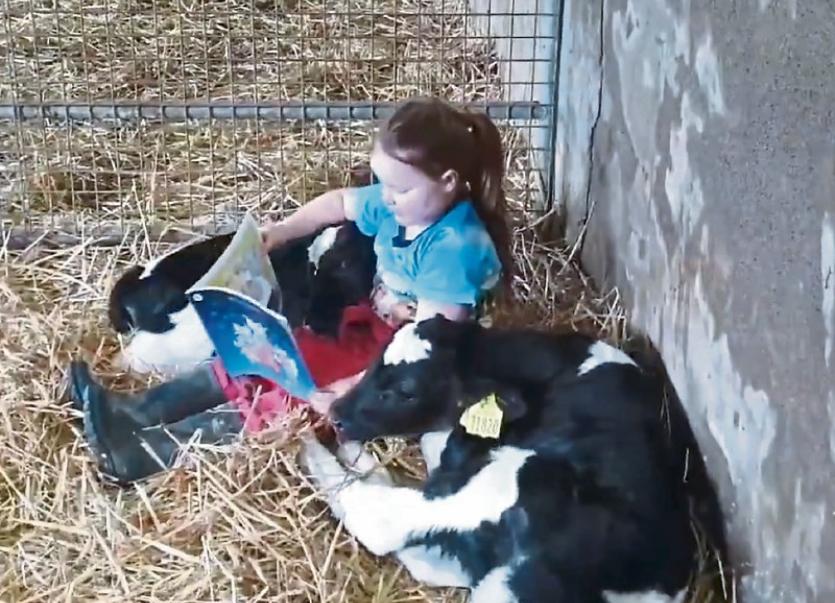 TWITTER has removed Peta UK’s tweet featuring a video of a Limerick farmer’s daughter reading a story to a calf.

Peter Hynes, originally from Crecora but now farming in Cork, said: “That post was removed by Twitter. We are chuffed. We are glad we stood up to them.”

This all started on Sunday, March 29, when Minister for Health Simon Harris tweeted: “What we are being asked to do is challenging for all of us but we must do it to keep each other safe. Let’s share ideas with each other of things to do around the house to pass the time - family games, TV recommendations, audio books, etc. Post them here!”

Peter replied with an adorable video of one of his daughters reading a story to two Friesian calves curled up beside her.

On Monday, March 30, Peta UK put up a tweet including the video with the words: “How adorable! Cows are social animals, like us they recognise their friends and grieve when their family members die. Sadly, most cows on dairy farms are slaughtered when they’re 5 or 6. We hope that these babies will be spared the horrors of the abattoir.”

The People for the Ethical Treatment of Animals (PETA) Foundation is a UK-based charity “dedicated to establishing and protecting the rights of all animals”.

A shocked Peter messaged them back to say: “Dear @PETAUK , you have no permission to use this video which is an infringement under GDPR. I am also disgusted that you are using my daughter to promote yourselves, kindly remove the video immediately!”

He also tweeted: “They have no permission, whatsoever. I have reported to the media, advertising standards, my solicitor and I expect a full apology to my daughter and family.”

In a video Peter said: “You have absolutely no authority to use that video. I have not been contacted. All media sources that use any of our videos or photographs always contact us directly under GDPR rules. I am demanding you remove that video straight away. I do not agree with it in anyway nor have you any permission to use it.”

“But it's ironic that a dairy farmer is expressing concern about consent – something he certainly doesn't have from the cows whose bodies he exploits. The milk they produce is for their babies, whom they love just as much as he does his, and we suspect that his little girl would choose to save the calves she's sitting with, instead of allowing them to be slaughtered, if given the choice.”

There was stalemate until last Thursday morning.

“I think it was a good outcome that it was removed by Twitter as opposed to being removed by Peta UK themselves,” said Peter, who is married to Paula.

He said trying to get it taken down was “time consuming”.

“We had to write a lot of emails and letters. The Data Protection Commissioner here was very helpful to us and extremely proactive in helping us resolve the issue,” said Peter.

The campaign was not just for his own family but for all farmers, he said.

“We are lucky ourselves that we are so used to using social media. We wanted to pursue this because farmers shouldn’t be afraid to post stuff on social media showing the good aspects of farming and why we enjoy our jobs. That is exactly why we persisted with the matter - that farmers can post things on social media without having the fear that somebody is going to take it without their permission,” said Peter.

Farm Leader contacted Peta UK who say the tweet has not been deleted but rather “temporarily removed”.

Peta’s director Elisa Allen said: “Peta's tweet – which points out that cows exploited on dairy farms are sent to slaughter once they're no longer deemed profitable – has not been deleted but rather temporarily removed while Twitter looks into the baseless complaints it has received about the post.

“The tweet was in full compliance with Twitter's terms of service – which Mr Hynes also entered into when he shared the video on a public platform.”