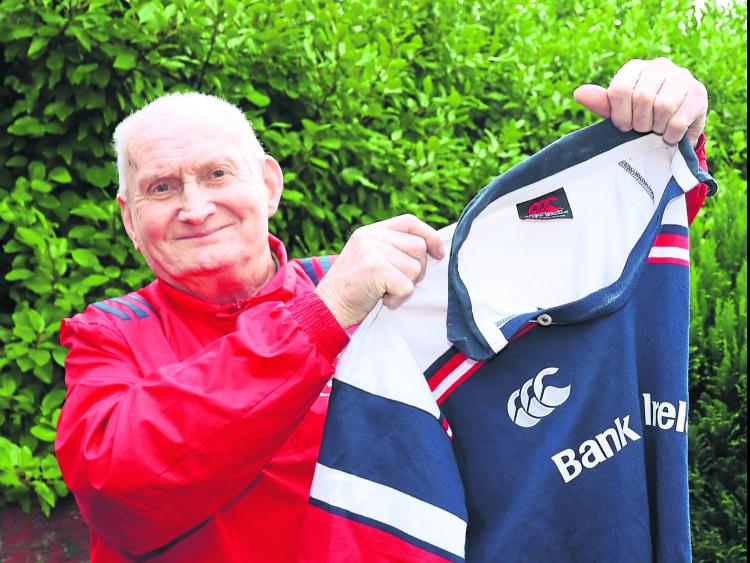 John Anderson, Doon, with a signed Munster jersey given to him by John Hayes (pictured in January)

I DOUBT we will ever see the likes of John Anderson again.

The proud Doon man was as colourful a character as you could ever meet. John was a big gambler. Over his lifetime he must have bet millions upon millions.

John passed away peacefully on Thursday. He had a long battle with cancer, undergoing surgery on his liver in 2017. Sadly, the cancer came back in his liver and then spread to his stomach.

In February 2019 he was given three to six months to live but he fought on for well over a year.

John was well-known. You’d see him in Doon, Limerick city and Tipperary Town ambling around. He would go from bookies to bookies looking for the best price. Although John had a soft spot for Ladbrokes. Invariably, he would be wearing a Munster jersey. He loved The Red Army.

The retired farmer enjoyed sport and betting on it. He kept dogs and there wasn’t much he didn’t know about greyhound racing or coursing.

John was in the Limerick Leader only last last January. He thought a signed Munster jersey given to him by John Hayes had been stolen.

"John Hayes heard I wasn’t well last year and sent me over a signed Munster jersey and tracksuit bottoms. It meant the world to me that a legend like John Hayes did that for me," said John.

Thankfully they had only been misplaced. "They mean the world to me," said John.

He put on his first bet when he was 12 – two shillings on Red Maggie at a coursing meeting in Galbally which won. He never looked back.

John was a fearsome gambler. €500 would be the equivalent of a fiver to you or I. He loved coming into the Leader and revealing his latest wins.

John told the Leader in the past: "I am now betting over 60 years and I have enjoyed it whether I win, lose or draw. I believe I am a shrewd punter and I study what I am about to do. I always look before I leap."

Not one for outsiders, the man known as “the kid from Doon” went in heavy on odds-on shots.

He wasn’t afraid to talk about his losses either. Back in 2012, John lost €56,000 when the hot favourites Leinster were beaten in the dying minutes of the RaboDirect PRO12 final. Ospreys scored a try in the corner. Dan Biggar nailed the touchline conversion to win by 1 point.

Afterwards John spoke about it because he said he can take a beating as well as winning.

"Around that time I saw a fellow who had a €10 bet in a shop. He lost. He then kicked the door on his way out. I asked staff why and they said he couldn’t afford to lose his tenner. Why did he not think of that before he had his bet?" said John, who echoed the golden rule of gambling – only bet with what you can afford to lose.

After that €56,000 loss, rumours went around that John was finished at betting but he bounced back.

"I’ll keep going until the well runs dry and tisn’t dry yet!" he laughed. The well never did run dry.

Gerry Kiely, manager of Ladbrokes in William Street, knew John for over 30 years. John would only bet with Gerry in the shop.

"John would be in nearly every day. We will never see the likes of John again. He was a great character and a lovely man. John was very popular," said Gerry.

Back in 2011, Ladbrokes introduced a loyalty card. John was the first to sign up for it. When they scanned his card it crashed the system because he had so many points!

"He was in only a few weeks ago before we had to close. On behalf of myself, the staff and all the customers in Ladbrokes on William Street I would like to express my sympathies to his family," said Gerry.

Due to the current national guidelines John’s funeral will take place in private. Mass will be arranged at a later date.